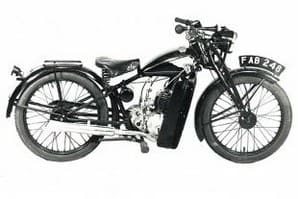 Nowadays, Royal Enfield is known for its solid, dependable, four-stroke Bullet singles. But it is easy to forget the company made other machines too – while the parallel twins are still widely recognised and enthused over, there were others as well… Royal Enfield offerings are just about the most affordable 1920s/30s V-twins (it’s all relative…) but it’s often forgotten that for many years, the firm produced two-strokes too.

The first 225cc two-strokes appeared before the First World War, and were listed right through the 1920s, gradually updated with the passing of time. There was even a ladies model, too.

The downright bizarre Model Z ‘Cycar’ appeared in early 1932, a fully-enclosed model powered by a 148cc engine. It ran alongside the 225cc version, while a more conservatively styled 148cc machine was listed from 1933 too, though by 1936 the models had been axed. The 225cc Model A was listed up to the Second World War.

The Flying Flea
Borrowing heavily from the DKW RT98, the 123cc two-stroke was made in answer to a request from Dutch company Stokvis and Zonen. Having been importing the DKW, and selling plenty of them, the import agreement had been cancelled due to DKW having Jewish owners. So the Dutchmen asked Royal Enfield to make them a version, to be branded the Royal Baby. War interrupted though – and the model was ‘called up’, becoming the Flying Flea, owing to the fact it was dropped from aircraft to be used by troops.

1947 Royal Enfield
Based on the wartime Flying Flea, the RE was a tough, workmanlike machine. Its ‘rubber band’ front forks were among its better features, but abandoned in favour of cheap, crude ‘teles’ in the interest of fashion in 1950.

1954 Royal Enfield Ensign
The much better – and heavily DKW RT125/BSA Bantam influenced – RE2 had been introduced for 1951, and then in 1953 came a development of that, the 148cc Ensign. Basic pivoted fork rear suspension featured at the rear.

1961 Royal Enfield Turbo Twin
Consisting of a 4T Villiers twin-cylinder 250cc twin engine housed in the existing Crusader chassis, the Turbo Twin – which related to the smoothness, rather than the just-over 70mph performance – lasted until October 1966.

1961 Royal Enfield Prince
The Prince came about in 1959, following on from version three of the Ensign. It had a new frame and forks, though the engine was based on its predecessor, though revised and boosted in power. It was discontinued in autumn 1962.

1964 Royal Enfield GP5
Despite lots of technical know-how – Geoff Duke and Hermann Meier were among those involved – and riding talent (Johns Cooper and Hartle among them) the GP5 was a compromise, hampered by its Alpha bottom-end and gearbox problems.

1972 Crusader
Exhibited at the Earls Court show, the Indian made 175cc Villiers engined Crusader had a Siba electric starter and was ‘prepared and marketed by Norton Villiers’. Apparently, 15 had already been ordered by Hants police for rider training.

Visit the Mortons Archive for more information and online search options concerning Royal Enfields, or speak to our archivist Jane Skayman on 01507 529423 with your requirements. Email enquiries@mortonsarchive.com