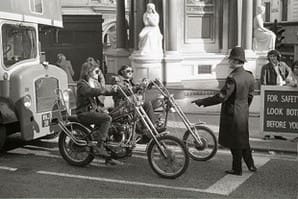 The images were judged on the quality of the photography – with no criteria for the type or condition of the motorcycle, whether its a classic or modern, sport or pleasure, riding or displaying. All we asked was that the image included a motorcycle… or part of one.

"Taken on a cold sunday morning in november at the start of a 2.5 hour enduro event. Pictured is a selection of bikes and riders from all ages."

? Second prize winner
Francis Custard from West Sussex sent in a few entries and this is the first time he has entered a photographic competition. This is one of Francis's favourite pics

"This is a favourite shot of mine of the little Honda 50cc workhorse in the far east.  It was taken on May 7, 2006 on the road from Hanoi to Halong Bay in Vietnam. I'm not sure if the load is destined for the market or bacon factory!"

? Top prize winner
John Edwards from Flintshire took this moody shot in about 1965. It was shot with a Zeiss Contaflex IV with Ilford B&W FP4 200ASA film. Lens was a 50mm Zeiss Tessar f2.8 and the 35mm negative was scanned to digital via Nikon Coolscan V ED.

"This photo was taken in about 1965 by the 'Clock Tower' in the centre of Brighton. I know the furthest rider was one Derek Pickett, a casual acquaintance of mine at the time. Unfortunately, I don’t recall his mate’s name."

We liked this one for so many reasons: the bikes, hairstyles, the policeman controlling everything with his finger, the double decker inches from the biker's grabrail on this side, bystanders with probing looks, the location and more. A super shot.

Congratulations to the winners and everyone who entered the comp, as the standards were so high. We hope to reproduce some of them and display them on the Mortons Archive stand at the forthcoming Stafford motorcycle show.

The first prize of a Davida custom motorcycle helmet will be presented to the winner at the Stafford show.

You can view the three winning images and some of the other entries in the photo comp teaser gallery.