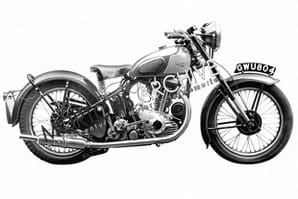 From the Pioneer days on, many Panthers had the distinctive design feature of being sans a front down tube, the engine doing the job instead. This of course continued right through the production cycle, with the final machines (645cc Model 120s) produced in 1966 still having the same set-up.

Panther Model 60
Largely unchanged from the prewar middleweight (introduced initially for 1932) the now two-tone blue (prewar it was black) 250cc Model 60 reappeared in 1946 and, for 1947, gained Dowty Oleomatic ‘air’ forks. Tested by The Motor Cycle in early 1948, it recorded more than 100mpg at normal speeds, and nearly 140mpg at 30mph.

Panther Model 100
Post World War Two the heavyweight range was re-started, with what was effectively the 1940 598cc Model 100 reintroduced. In 1947, the Dowty forks came on line, while changes thence forth were minimal. A 500cc prototype was shown in 1948 but never made it to production, leaving the field clear for the Model 100.

Panther Model 65
Model 65 – Based on the Stroud design – which made its debut at the Colmore Cup in 1948 – with vertical cylinder barrel, the new models (250cc 65 and 350cc 75) offered significant performance improvements on those which went before. The 65 had a four-speed gearbox; the 60 only had three.

Panther Model 75
Final development of the 350cc Model 75 was this spring frame variant; by now, the rigid job had been dropped from the range. There were details changes (different tank etc.) and the model continued until near the end of 1961. The 250cc had gone in mid-1960. It was reckoned 12,000 postwar middleweights (250 and 350cc) were built.

Panther Model 100S
The swinging arm frame first appeared in production form in late 1953, while by front forks were of Panther’s own design and manufacture too. By now, finish was maroon and in 1957 production of the rigid job finished as well – although they were available to special order until 1960.