In the veteran period, many motorcycles had their idiosyncrasies for the rider to deal with, and a set formula was yet to be decided upon with regard to the layout of the machine controls. Throttles switched sides, gears worked various ways round and could be on either side, clutches varied from hand control to foot action, ignition and carburettor controls switched sides while braking was subject to myriad changes…

In these days of every modern motorcycle having exactly the same control layout with regard to clutch, gears and brakes – and the likes of ignition taken care of automatically – unfamiliarity with control locations is not something the modern rider has to consider.

As a concern, Overseas seem to have been an early example of badge engineering. There seems to have been at least a tie-up – and possibly more – with Birmingham-based LMC, who themselves were spawned when designer WJ Lloyd left the Quadrant concern. The first LMCs bore more than a passing resemblance to the Quadrants, built earlier to Lloyd’s designs. It would appear that the Overseas was – as the name suggests – for the overseas market, and that some ‘outdated’ parts were used up by making the machine, probably to be sold in colonial markets. Very few are known to be extant today, with this example possibly the only one in Europe – and possibly the only running example in the world. 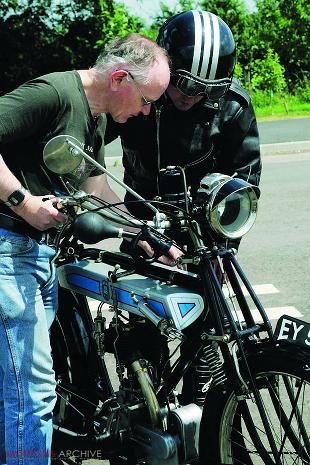 This Overseas, currently in the care of Leominster-based restoration expert Robin James, is owned by a French-exiled Hampshire enthusiast. It has been in the well-equipped James premises for some time, with Robin and his team having to undertake a fair amount of work to bring the veteran up to the standard you see before you. The timing side crankcase was effectively scrap, with the main bearing spinning round and round in its housing. The two cams needed remanufacturing too, with their housings also loose. The James workshops adapted the old casting as a pattern, before having a new item cast, which was then machined to suit.

Robin reports that elsewhere, “there were lots of bodges all over it,” which given the machine’s age, probably comes as no surprise.

The unusual B&B carburettor needed attention too, and now uses an adapted modern jet and needle to ensure it works as the maker intended.

Though it is indeed ‘getting there’ and has been road-tested, it is still a formidable proposition for the relative veteran novice… such as me. Though I’ve had the fortune to have twice successfully completed the London-Brighton Pioneer pre-1915 Run on machines kindly loaned by the National Motor Museum in Beaulieu, that is the limit of my veteran experience… and the two machines from Beaulieu were both relatively ‘simple’ veteran tools to operate. The Overseas takes unfamiliarity to a whole new level…

As Robin explained to me the art of riding the Overseas, my head was swimming in a sea of new skills to learn. The art of riding a machine like the Overseas is absolutely nothing like the majority of powered two-wheelers most of us are familiar with. There is very little which it has in common with riding a more modern machine – in truth, the only similarity is that it has a wheel at either end and the engine is in the middle. Even starting is an alien experience – there’s no kick-start, but a crank-handle attached to the rear wheel with which to fire up the machine’s 3.5hp engine. Before we did that though, Robin ran through the controls with me.

Firstly, the throttle – a lever, naturally – is at least in the position where one would expect to find a lever throttle atop the right side handlebar. But then it gets confusing… this throttle works in the opposite direction to the norm, as in to ‘go faster’ the lever is pushed away, in the manner of a boat.

Robin explained, “We’re not sure if this is normal practice for the machine, or it has been changed to that, but the owner prefers it that way, so it’s how we’ve left it.” This is, to say the least, disconcerting, and thoughts of what one would do in an emergency when instincts take over are a bit worrying… Still, the key of course is to avoid emergencies! The front brake is at least located in the normal right-hand handlebar position, though Robin noted, “It’s next to useless!” The brake itself is a block-type, as found on a pushbike  but, at least it has a front brake, as several veterans of the period were sans fore-mounted stopper, having two-rear wheel brakes to get around the legal necessity of having a pair of brakes. Of course, contemporary road conditions were very different to what they are today, so it was felt – probably quite correctly – that a front brake on mud, dust and dirt roads was more of a hazard in itself than a help.

Left floorboard
The rear brake, the better of the two, is mounted on the left footboard, though at the rear of the board and so heel operated. Still, that’s not too much of a departure… unlike the use for the other foot, which is to operate the clutch. And, to further complicate the job, the clutch is locked in place and has to be pressed before it releases and subsequently works.

Also right-side mounted is the manual oil pump. The rider needs to ‘stoop’ down to operate it, and the process is further complicated as it has a two-way cock. Basically, it has twisted open to suck in charge, then another application undertaken so that the charge can be pumped into the engine. And this process needs to be repeated every three or four miles.

Mounted to the right of the tank is a half-compression lever to aid starting, while there is also – on the right – a ‘start’ setting on the carburettor that is switched to ‘run’ once the engine is warmed up. 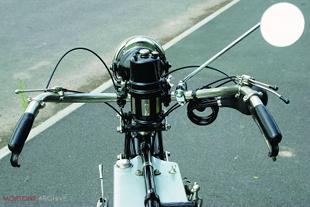 And finally we come to the functions of the rider’s left hand. Up on the handlebar is the conventionally-operating valve-lifter (which is where one would normally find the clutch – an unscheduled engine stop waiting to happen!) and the ignition control lever, which works in the same way as the throttle – as in push away for advance. The ignition is retarded by pulling the lever back, and so on the move the rider wants to be pushing both throttle and ignition away as speed increases.

But that is not the left hand’s only job – gear shifting is a left-hand operation too. And that, of course, is not a simple case, oh no. Furthest away is first, next along is second, then comes neutral and, then, fully back is top. So, setting off means moving the gear lever through second gear and into first, while second to top means going through neutral…

So, with my head trying desperately to compute all that and put it into practice, Robin fired up the machine and I settled into the saddle. Seat height is quite lofty, with the handlebars pulled back in a familiar veteran/early vintage style. I had decided to break what is the habit of a lifetime and eschew gloves for my ride – something I’d never normally do, whatever the weather, but feeling that I’d need fingers with the nimbleness of a pianist to push, pull and tweak the myriad levers, my chunky armoured gloves had to be abandoned.

Clutch unlocked
With clutch ‘unlocked’ from its housing, I gingerly depressed it and with my left hand shunted the gear lever forward and through into first gear. Now, it was time for a few revs and a touch of ignition advance and then slowly, slowly up with the right foot, feeding out the clutch. We set off, admittedly a bit wobbly and at little more than walking pace. Gently I accelerated away from where Robin waited, and set-off around our handily located private circuit. After a few hundred yards it was time to try a gear change – despite a few wobbles (it feels very unnatural taking the left hand off the handlebar for anything other than signalling when on the move). First to second was successfully negotiated and I managed to remember which way to open the throttle after the gear change. I stayed in second, and kept the speed low while playing with the air and ignition levers to keep up forward progress. As is usual with a Robin James restoration, the Overseas ran beautifully smoothly and didn’t object to my inexperienced hand being at the controls. 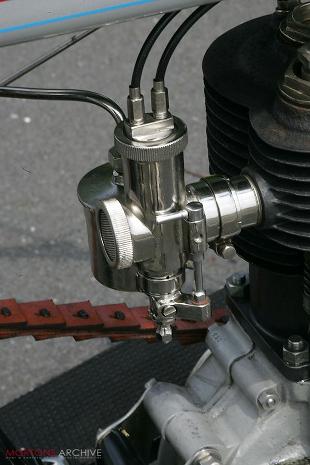 After trickling round our circuit, for a couple of laps, I started slowing and accelerating, to try and get my head into gear with the controls. A machine like this definitely takes some mastering, but the satisfaction is in feeling that one is starting to ‘get the drop of it.’ A few more slow downs and speed-ups, and I felt confident to try the gear change I was most worried about – second to third, through that neutral. So, throttle pulled back, ignition knocked off a touch, foot down on clutch and left hand off the bars – and we made it! Now in top gear, the lusty Overseas picked up pace with an eagerness which belied its age. The flexibility of the engine and the blissful lack of anyone else in attendance, meant that it was unnecessary to slow down too much for the few corners – jut knock off the throttle a touch, a tug on the tillers bars, and round she went. You know, I was actually beginning to enjoy myself!

Having circulated rather regally for quite a while, it was time to stop – which I was somewhat nervously anticipating. But the time had come to bring a halt to proceedings, so halt we must. A change down from third to second was effected successfully – albeit accompanied by a bit of a wobble – and I made a final lunge into first when it nearly stopped, before coming to a halt. Admittedly, I managed to stall the job before coasting to a halt, but all in all, I’d come away impressed with the Overseas.

There is, indeed, immense satisfaction to be gained from riding a machine like this. Speed doesn’t come into the equation one iota, instead the successful piloting becomes the challenge. Every stop, every start, every gear change – it’s all part of the experience, an experience that can be ultimately very rewarding.