Over 200 competitors were named in the programme, scheduled to give over six hours of racing. First event of the day was for 150cc machines, over six laps. There were 30 supposed to be attending, though only 16 came to the grid. John Hogan (MV Agusta) shot straight into the lead, initially with Fron Purslow (Triumph) in pursuit, though Bill Webster (MV) came through to provide Hogan with opposition – though, on the last lap, Webster dropped the plot and Hogan took victory.

Then it was the start of the ‘Bob Mac show’. On the baby Norton – sleeved to 250cc, with outside flywheel and one-piece crankshaft – he came through the field to win, from Edlin (EMC) and Charlie Bruce (Velocette). 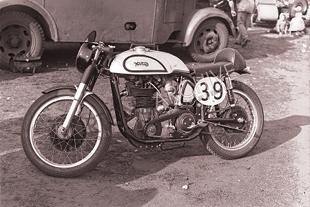 There were two 500cc heats, with McIntyre (Norton) and Terry Shepherd (Norton) winning one apiece. The grid of 32 for the final formed – Carter (Norton) took the lead, but by lap three, it was Bob Mac. Jack Brett (Norton) looked his likeliest pursuer and by race end was only 100 yards back. Shepherd was third.

There were also two sidecar races as well. In the six-lap scratch race, Pip Harris (Norton) charged into the lead, but suffered an ‘off’ on lap three, allowing Bill Boddice (Norton) to take over the lead. However, on the final lap RL Mitchell (Norton) overhauled Boddice, to claim victory. The sidecar handicap race provided Harris with a win from scratch – his race speed (76.93mph) matching his fastest lap in the earlier outing.

However, despite Harris’ sidecar heroics, few could argue it was anyone but Bob Mac’s day, with the Scotsman winning five times out of five starts. Tragically, Bob McIntyre was to lose his life at the same circuit, six years later.