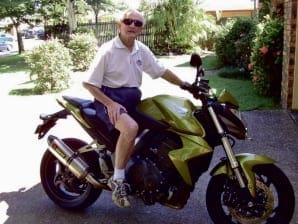 I have been reading your mag for some time now and love its contents.

At 91 David Griffiths is still enjoying riding. Good on you, David!

I must congratulate the mention of the oldest Aussie rider in the February issue.

I still ride and have copped enough flack lately about the numbers game. You know, they say that because I am 91, I am therefore too old to be riding a motorcycle.

My first was an ex-army MSS Velo in 1944. Then I progressed to buying one of the first Triumph Speed Twins when they arrived in Brisbane.

I sold the Speed Twin after two years and bought one of the first Norton Dominators that arrived in Brisbane.

This machine was a beautiful unit on the road, even though it had the rigid frame. I spent three months stripping, polishing the inlet and exhaust ports and head, and even designed and manufactured a positive carby intake unit for better breathing, etc.

This Norton was very dominant at the club events we ran every Saturday afternoon at an abandoned American fighter strip constructed for the defence of Brisbane during the war.

ll of our sons rode motorcycles when they were in their late teens and kept me really busy with repairs to damage from ‘minor bingles’ – thank god for the minor bit… Even though I am stealing Jack Taylor’s thunder being one year older than him, I am pleased to see I am not the only old silly motorbike bugger around the traps! Good on you Jack.