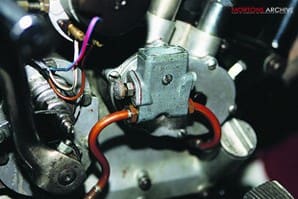 Mechanical pumps fall into three groups – feed only, scavenge only and duplex pumps, which serve both roles. Many later total loss engines, often in use during the 1920s and early 1930s, along with some sports engines such as speedway motors, were served with engine-driven mechanical delivery only pumps, which in many cases served to meter the oil into the engine rather than pressure feed it. Often the oil reached the crankshaft a drop at a time and then splashed around internally.

For a range of reasons – including better oil sealing at the piston rings and joints – many makers from the late 1920s onwards developed dry-sump lubrication systems. As engine oil sealing improved and engine performance increased, it became more difficult to control the oil level within the crankcases, which often became too high, encouraging owners to cut oil delivery rate by adjustment. Then when the machine was used for low speed work, there was the potential for oil levels to fall. 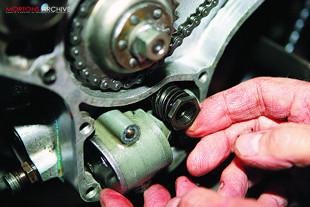 My son experiences this exact problem with a late 1920s Norton 16H which is fed by a delivery-only pump. After 50/60 miles at 50/55mph crankcase oil level has risen, not dramatically but it’s higher than when the machine is ridden at slower speeds for a similar mileage such as on a club run. Rather than cut the oil feed, Peter drains some of the oil from the crankcase if he’s concerned.

The concept of dry sump lubrication was nothing new and pre-dates the common rush to dry sump systems of the late-1920s by more than a decade for a small number of engine makers. Other advantages of the system include the ability to pressure feed oil in volume around the engine – especially those bearings under increased load due to better engine performance such as big-end and main bearings – and to the barrel walls, the minimising of oil-drag within the crankcase by maintaining oil level at a low height and the combined advantages of cooling the oil and oil cooling the engine. 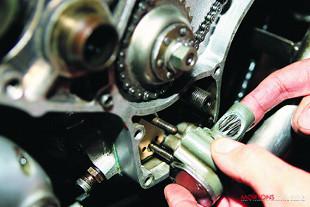 Dry sump systems followed two design paths. A few copied car practice by using a sump at a lower level than the crankcase into which the oil often returned by gravity rather than a pump; or alternatively the oil was lifted by pump to a separate receptacle, often a thin gauge steel or aluminium tank usually mounted remotely from the engine.

While gravity return systems to a sump mounted or cast under the engine as employed by New Imperial for its unit construction models of the 1930s – in this case the oil serves the gearbox too – work well, many designers considered the concept had disadvantages. One was increased engine height and systems with remote tanks will to some extent cool the oil better than under crankcase sumps. Interestingly, a variation of this concept, based on car practice with wet-sump lubrication, is found on many modern machines. However, many of them are water-cooled units and therefore run cooler than most of our classic motorcycles and some run outboard oil coolers. 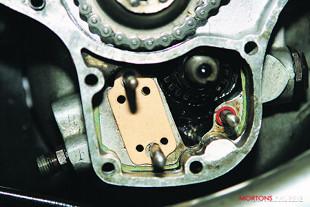 Many designers soon favoured dry sump systems, especially when combined with pressure feed to the crankshaft enabling the unit to be worked harder for longer without overheating the bearings and of course maintaining excellent lubrication. While many roller big end designs may work well if fed by splash, excepting high performance units, the advent of split type big ends made pressure fed oiling essential.

During the 1930s more and more makers developed valve gear enclosure, making pumped oil feed to the engine’s top end viable. Often makers incorporated a spur from the oil return side of the pump/s to the engine’s rocker or cam box. While many regard this as a minimal form of oil feed, in most cases it worked. Although a few makers tried separate oil pumps for feed and scavenge, the vast majority opted for duplex pumps. Commonly, these are either of the gear type as used by BSA or the double plunger variety which Triumph and many others employed. For the most part, these two types served many British makers. Screw, rotating cam and trochoid are examples of other pumps which may be encountered. The oil pump strip in this feature focuses on the gear pump. 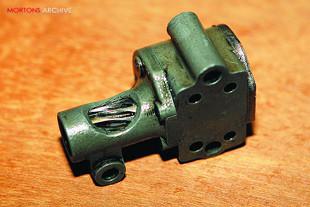 Oiling route
For the majority of pump fed systems found on dry sump classics, the oil is fed by pump to the crankshaft bearings, often by drillings through the crankshaft. As oil escapes the crankshaft bearings it is moved by splash to lubricate the piston, cylinder bores, little end, camshafts, crankcase, into the timing chest and if appropriate in selected unit construction models into the gearbox and clutch.

Once oil has reached a predetermined level in the crankcase, it enters the scavenge system. Either a separate scavenge pump or more commonly the scavenge side of the duplex pump returns oil to the oil tank, in some cases via a filter. With many classic machines, especially British models, a small amount of the scavenged oil is fed to the rocker box or cam box for some OHC models. In the case of most OHV pushrod engines, this oil lubricated the rocker gear, cylinder head if appropriate and in many cases dribbled down pushrod tunnels, lubricating pushrod cups and tappet gear if appropriate. For OHC models it often lubricates camshaft bearings, both drive and within the cambox. In almost all cases the oil returns to the engine’s crankcases by gravity and then again enters the scavenge cycle. For a few later, imported classics, the scavenge system may send oil to the tachometer drive, clutch, gearbox, generator drive and cam chain. 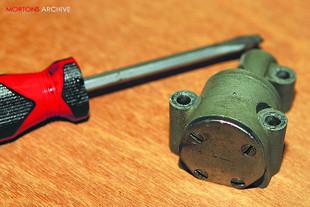 As a by-thumb guide, most motorcycle dry sump oiling systems scavenge oil at about twice the rate of the oil feed to the engine. In most cases these rates are pre-set by the motorcycle or oil pump makers and as will be seen in the accompanying pictures of the BSA A10 oil pump there is no possibility to increase the oil feed and scavenge rates by adjustment. For racing, high speed road work or simply to increase the flow rate, SRM (www.srm-engineering.com) among others manufacture and market high delivery pumps appropriate to the subject BSA A10 and also A7, A50 and A65 models.

The BSA gear oil pump
Apart from BSA, many other makers including Velocette have used double gear pumps for feed and scavenge since pre-WWII days. In most cases drive to the pump is from the crankshaft but odd makers of side-valve and OHV engines used camshaft drive to the oil pump. The subject BSA A10 is driven by a worm gear from the crankshaft. 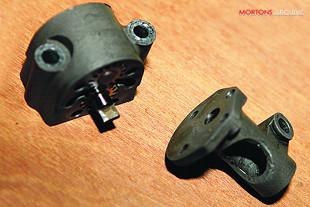 Once the engine is stopped, oil could drain back into the engine thanks to gravity as the vast majority of remote oil tanks are mounted higher on the motorcycle frame than the engine crankcases and crankshaft into which the oil feeds. This problem is commonly known in the UK as ‘wet sumping,’ although other countries have different names for it. Many gear pumps rely on the close fit of the gears to prevent wet sumping, however some gear oil pumps have an additional valve fitted to prevent oil draining back into the engine when it’s not running. The subject A10 has no such valve, yet experience of this machine informs it doesn’t wet sump even after standing idle in the workshop during the worst of the winter.

Since the role of any oil pump is to move lubricant, usually in high volume, it works under near ideal conditions. As a result, wear is seldom a problem, even with pumps from engines having covered high mileages, but blocks and physical damage occurs occasionally. Any form of debris, even sludge in motorcycle engines not subjected to regular oil changes, can block the pump’s oil ways. 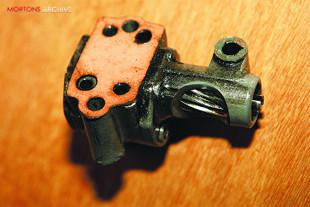 After any serious engine malfunction involving broken parts, even a single piston ring, it’s a wise precaution to strip and clean the oil pump as well as ensuring all material is removed from the engine. Additionally, always remove and clean oil tank and all oil pipes, gauze filters and other appropriate parts. Most blow-ups necessitate a full engine strip at which time it’s cleaned internally – however, some chance flushing an engine’s bottom end after a holed piston or broken rings. Not a recommended course of action as a single chip of aluminium or a piece of piston ring can block an oil way, leading to another blow-up. Equally, even small pieces of hard metal from a piston ring or the like can enter the pump to chip teeth or lock the pump.

Thanks to their oily residence, pumps seldom seize, unless physically damaged, but operation can become laboured. True, they’ll continue turning at the required speed, but they will put an unnecessary strain on their drive and sap engine power. Commonly, this happens with engines which haven’t had regular oil changes or is caused by the deposits of engine combustion over a high mileage adhering to the pump’s internal body and moving parts. 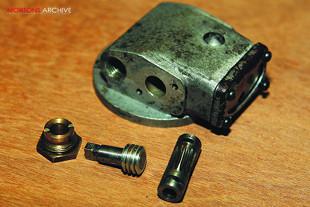 Those who have followed this technical series and the YWA column will know my passion for regular oil changes. And sludge build-up in the pump as a result of dirty oil or condensation is easily prevented by oil change intervals no longer than recommended by the maker, and as a minimum for low mileage models, at least annually. With regard to black carbon/varnish-like deposits, it’s a sound idea to service oil pumps at the same time that a decoke is carried out. And since many pumps like this A10 unit are easily accessed without a major strip, the job doesn’t take long.

Once stripped, clean the entire pump, lightly oil and reassemble. Test pump action – if it spins easily prime with appropriate grade oil and refit. If stiff as the result of near invisible deposits adhering to gear spindle ends/shafts, polish with fine emery cloth or metal polish. Whichever course of action is taken, it’s essential the pump is again stripped and thoroughly cleaned as any abrasive left in the pump will act as a lap on moving parts and may enter the engine. 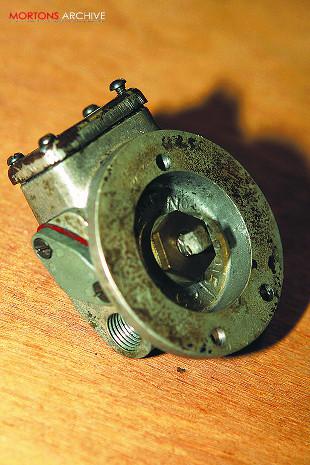 Gear oil pumps rely on a tight seal between gears and pump body. With high mileage pumps, wear in the form of two circles may be detected on the body’s detachable end plate/s. This can be removed by rubbing flat the worn surface on fine emery paper pressed flat onto a surface plate. Extreme care is required to keep the subject area true. If unsure of your skill, many small engineering concerns will machine the surface true by milling just a fraction of an inch from the surface.

Pumps are precisely machined components and all required clearances (commonly between .001-.002in) are taken into account at the manufacturing stage. Therefore if your pump originally had paper gaskets fitted, refit same of original thickness. For a perfect seal, many pumps are fitted to the crankcase using a paper, fibre or composite gasket. Never be tempted into using any jointing compound, even silicone, as excess could squeeze into the oil ways when the pump body is tightened in position with fasteners. If an oil way is blocked, the engine could smartly go bang.

After refitting an oil pump, run the engine at low revs until oil begins to return to the oil tank. Then regularly check action until your trust in its operation grows.