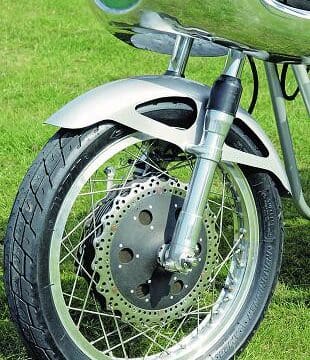 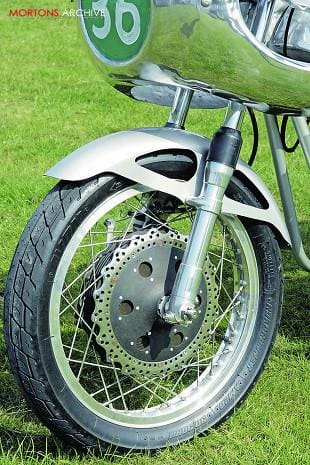 Many have dreamt of building their perfect motorcycle. Triton, NorBSA, TriBSA, Norvin, Grumph, Tri–Greeves, Honton and many others have been the result of our fertile, or at times over fertile, minds. While many were or are beautifully crafted specials, a minority were true mongrels fit only for unveiling after dark. The skill is not only to build a well engineered special but also to give it visual style. Despite their quality most comprise of predominantly available components, albeit often heavily modified.

The brave took their engineering further forward building their own engines, or frames, or forks or even the whole lot. Thanks to indulgent bosses looking the other way after a day’s work was done or those with the luxury of a well appointed warm garden shed, lathes, mills, foundry kit and welding plants were and still are busy in the quest for perfection.

In the 250cc racing world this enterprise led to many successful lightweights including the REG machines built initially by engineers Bob Geeson from Ruislip and Gordon Allen of Ealing, West London. Following a move to Croydon and the Metal Box Company Bob, then on his own, redesigned the engine following early big end failures leading to the REG which Bob raced and later John Surtees took to many wins. Later, another REG (MkII if you like) was built by Bob and his machines were raced by John Hartle, Derek Minter, Sid Mizen and former NSU rider Fred Hardy who not only further developed the REG concept but had earlier developed his own NSU racer.

Another brave option in the late 1950s – if you couldn’t find or afford an over the counter NSU Sportmax OHC single – was to reframe existing hardware to give the machines another lease of life with the new chassis offering better road holding and cornering abilities. In effect a faster frame. In this mould the likes of Australian Les Diener (DOHC MOV), Ron Jones (Triumph Tiger 70) and especially Roland Pike (Rudge) gave their well prepared and often highly modified 250 singles a successfully extended life. Another who wanted to extend the life of his planned 250cc racing mount in 1959 with a faster frame was Geoff Duke.

Geoff jumped at the chance to race an ex-works NSU Rennmax, which former Irish racer and IoM TT winner Reg Armstrong had acquired on loan. Hoping for one of the well developed 1954 models, the pair were disappointed at the sight of the earlier 1953 machine which initially was pretty sick in the engine department. Although in a works sprung frame unlike the rigid road going singles Diener, Jones and Pike started with, Duke knew a further six years of frame development would help the Rennmax speed up. 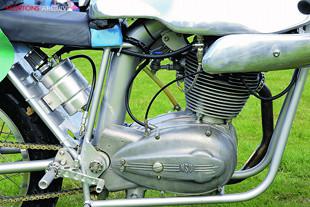 Renowned frame builder and supreme welder Ken Sprayson sketched a light modern frame and front fork for the OHC 250cc twin cylinder NSU engine which Reynolds built. Unfortunately in Duke’s hands the Sprayson framed German twin underwhelmed. A truly wet day at the year’s Austrian GP brought the plot to a halt on lap one with water in the ignition. Lack of preparation time led to the scratching of its entry for the North West 200 and the motor seized on the first lap of practice for the 1959 Lightweight TT – incidentally, the last time the 250cc Lightweight along with the 125cc Lightweight and Sidecar TT was run on the shorter Clypse circuit. Later ridden by Dickie Carter, Geoff Duke’s concept raced with much success in Ireland.

Long standing Irish NSU enthusiast Tom Healion, fired by the Geoff Duke update of the NSU Rennmax, hatched his own plan. And like any true special builder, Tom instantly threw the rule book away. Although the frame was built in the style of the Duke project Tom planned to install his take of the OHC single cylinder NSU Sportmax unit. After all, if the tough OHC single was fast enough for Mike Hailwood, 1955 250cc World Champion Hermann Peter ‘Happy’ Muller, 1955 Ulster GP winner John Surtees, Sammy Miller and many others, it would suit as the power unit for his creation. 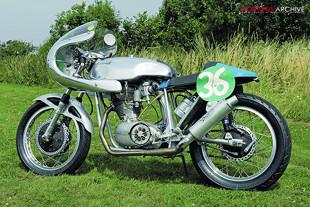 Rather than start work immediately, Mr Healion spent two years researching, planning, sketching and collecting parts. For Tom, like most of us, cash is precious and as the project would be expensive he certainly didn’t intend wasting money carrying out work which later would need modifying or replacing.

A picture of the frame designed by Ken Sprayson for the Armstrong/Duke Rennmax appeared in the 1959 motorcycle press, including the weeklies in May. However further research to help with dimensions proved less easy. Luckily a Reynolds frame for an NSU surfaced under one of the benches of a well respected NSU enthusiast and restorer. Fortunately Claus Ahimer helped Tom start his project and also with the geometry for the three inch spine frame and later its construction, leading to as near as possible replica of the Duke/Sprayson three inch spine frame with lightweight tubular double cradle structure under the engine. The complete frame tips the scales at just 19.5kg (43lb) inclusive or swinging arm and rear shock absorbers. 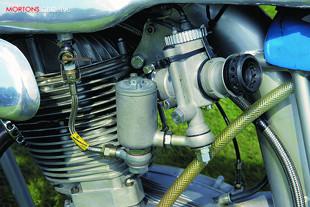 Rather than start with a complete engine, over a few years Tom assembled the parts to build ‘his’ engine. The Sportmax crankcases were discovered in Ireland. To the growing pile was added a NSU seven spring clutch, later modified for racing, a new five-speed gear cluster set and the standard NSU Max primary drive. Starting with NSU parts, a crankshaft was built to racing standards to which a Carrillo connecting rod specially made to suit the engine’s flywheels was mounted. Considering the time and cash investment spent on building the engine’s bottom end, Tom had no hesitation in splashing out on an alloy bodied racing standard oil pump.

The camshaft and all valve gear was sourced or made as appropriate to original Sportmax specification. An American JP slipper piston with diamond coated gudgeon pin runs in a replica alloy cylinder barrel. Compression ratio is currently 10:1 and the cylinder head casting includes straighter ports and has since received much further tuning work. In common with many four-strokes double valves springs rapidly close the valves. 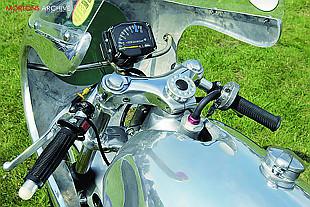 We all do it from time to time… that is, buy motorcycle parts because they’re rare, desirable, emotive or whatever, rather than because we actually need them there and then.  Often they’re expensive too… but, simply, it has to be done. In such a frame of mind, many years ago Tom Healion bought an unused 13/16in Amal GP racing carburettor, one of the most purposeful looking carbs made by Amal. This size is rare – it’s one of only 300 sold by the Holdford Road, Witton, Birmingham company, now it’s finally found a home on the Sportymax.

Getting enough fuel efficiently into an engine is vital for performance but it’s equally vital to get the spent gases out smartly. A 1mm wall stainless pipe leads from the engine into a collector pipe which has been developed to act as a megaphone, ensuring the engine performs equally as well with or without a silencer and the collector pipe permits the easy fitment of a silencer to appease race officials. Currently, an NCR can is employed. As NSU Max owners know, their engines need some exhaust back-pressure to perform well and the easiest way to detune them is fit a baffle-less silencer from another machine or even use a straight through pipe.

'As NSU Max owners know, their engines need some exhaust back-pressure to perform well and the easiest way to detune them is fit a baffle-less silencer from another machine or even use a straight through pipe'

After considering many options Tom fitted a PVL self generating ignition system, which has consistently given satisfaction from the machine’s first start up day. And finally for the engine department, a Krober rev counter keeps an eye on how fast the mill down below is revolving. The rev counter is essential as the engine so ably built to Mr Healion’s dream from the pile of collected parts by leading UK NSU specialist Harold Nuttall is ultra smooth, giving no indication of how busy it’s becoming. Having presented Harold with nothing more than boxes of ideas, Tom describes Mr Nuttall’s work as ‘…nothing short of a miracle.’

The wheels proved one of the more challenging aspects of the Sportymax. The hubs are replicas of the original magnesium components found on NSU works and some over the counter racing 250s. The front for example is a four-piece structure assembled with 12 copper rivets. Once fully built with flanged aluminium WM2 rims, they looked the part and worth the effort and heartache.

Oil damped Ceriani forks were earmarked to serve the front of the machine and Tom selected Hagon rear shock absorbers. Then he designed and developed the readily adjustable swinging arm dampers with the first 1/10 of a turn equating to 4lb pressure.

Many of the detail parts such as the footrests started life as off the shelf Italian made components, while some were then modified to suit the Sportymax project. The polished fuel tank was made by Welsh specialist TA Baker and the Tank Shop supplied a replica Ducati 900SS fairing which needed little tailoring to suit. In addition to the specialists mentioned Mr Healion would like to include and thank Richard (Dick) Linton for time, guidance and patience plus his help in locating many hard to source components. 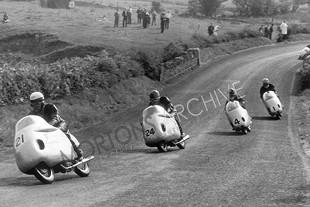 Although needing a few hefty chaps to bump start it or the services of starting rollers, the Sportymax fired up ‘from the box’ and ran smoothly although initially somewhat erratically due to inappropriate carburettor set up. Much improved by its first racing outing on the Kirkistown Race Circuit, in October 2007, it was still suffering minor carburettor problems. Although under performing, it nonetheless finished.

Much time and effort has since been spent setting up the Amal GP to suit the 250cc OHC NSU single cylinder engine. By its outing at the Waterstown, Co West Meath races in July 2008, the engine was reported as going very well. More importantly it was dishing out a healthy 29bhp measured at the back wheel, which compares favourably with the factory claimed figure of 28.2bhp at 9000rpm for the over the counter Sportmax racers which performed so well in the quarter litre classes 50 years ago.

Tom Healion’s racer is a superb example of a dream reaching reality. Throughout the project he’s envisaged what he hoped to achieve and stuck as closely as possible to his dream. At times the going was tough but thanks to the guidance of Harold Nuttall, Dick Linton and Claus Ahimer, Tom soldiered on to create his take on what a classic 1950s style racing 250 should look and perform like.

It was never an intention to deceive anyone into believing this is a replica of the Armstrong/Duke/Sprayson Rennmax or a factory development of the single cylinder Sportmax. In the spirit of this thinking Tom has inserted the letter ‘y’ into Sportmax to create the name ‘Sportymax’ for his racing motorcycle.