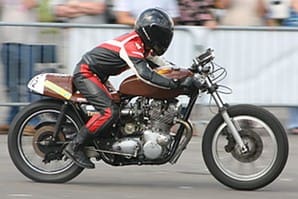 With the serious business dealt with in the afternoon, the evening was given over to the Awards evening and a chance to socialise. With a large number of trophies to dispense, it looked as if it could be a long night, but a small number of obviously talented riders cleared a lot of the silverware.

After an impressive list of Vintage class wins was read out, it was followed by the name of John Young. For some years, John has competed with a pair of vintage Triumphs where dope-burning JAP engines have been substituted for the original power-plants, an early 500 and a post-war 350 provided a busy season and John returned to his seat loaded with an arm-stretching quantity of cups and plaques.

Another multiple-recipient was Jasper Joy, who has been getting quicker and quicker on a Triumph Trident. He is also consistent and these qualities helped him annex the ‘Unlimited non-Japanese’ class as well as success in the tougher fight for the overall Southern Section Championship.