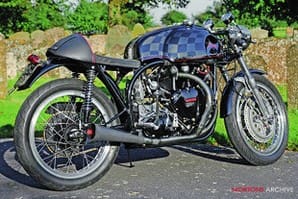 At a time when the café racer was king, the December 1964 issue of Motorcycle Mechanics announced the arrival of a yellow emperor. The machine was described as a Vin-Nor, following the convention of prefixing a hybrid with the engine manufacturer’s name. The garish special combined a 998cc Vincent V-twin with a Norton Featherbed chassis, though its name was hardly evocative of a legend in the making. The example owned by cartoon character Ogri, much loved by readers of Bike magazine, got closer to the mark with ‘Armageddon’ in 1972, but similar machines tend to be referred to nowadays as Norvins.

A profoundly shy child called Mick Sobalak was especially moved by the idea of a machine without equal, one that was impressive enough to silence its detractors despite a reputation for being difficult to handle. Mick does not recall his school years with any affection. His headmaster had despaired of ever getting him to join in with games or sports until one fateful day in 1968 when Mick was aged 14, he saw a 1952 Triumph Thunderbird advertised for sale. He saved up the £12 necessary to buy it by dry-stone walling for local farmers and the head eventually gave his approval, so long as other boys at the school could take it in turns to ride the Triumph. Such an enlightened introduction to motorcycling is hard to imagine today. 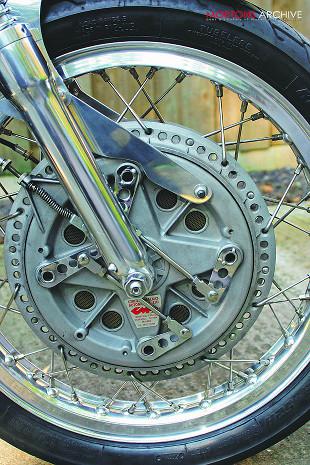 Mick had rebuilt his Triumph twin as a café racer by the time he left school. He quickly applied his practical skills to the building trade, sometimes calling in to Chelsea Bridge on his way home from work, though he was never the type to socialise for very long. Instead, he would move on to Shepherd’s Bush, where he could gaze without interruption through the windows of Vincent specialists Conway Motors in Goldhawk Road. “Vincents didn’t inspire me very much, actually, but the Norvins really opened my eyes,” he remembers. “Everything looked so compact and tight-fitting that you couldn’t have put your hand through it.”

Mick earned enough money over the next 30 years to build his own house in West London, get married and raise a family. So when the sight of a tidy-looking Norvin for sale at the Netley Marsh Eurojumble triggered old memories, he decided to turn his dream into reality. He feels that he was destined to own this particular example, even though it turned out to require more work than he had anticipated. “It had a noisy engine that leaked oil and it didn’t handle like it should,” he explains. “I didn’t really mind, because my bikes have always been about attention to detail and the way they are put together, so I was always going to take it apart.”

He consulted Sandy Topen, a meticulous Scottish engineer who is an authority on the Norton racing chassis. Sandy’s first task was to verify misalignment of the frame, using a bespoke jig. Straightening the tubes proved impractical, so the 1957 wideline featherbed frame was substantially refabricated in T45 carbon manganese tubing as a Manx replica, its shape characterised by wide curvature of its rear upper loops and the absence of a reinforcing gusset beneath the headstock. 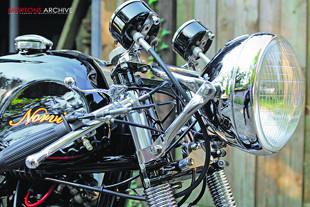 Mick took the 1950 Vincent Black Shadow engine home from Sandy’s workshop in Watford and stripped it for inspection. The crankcases were in good shape, but although the engine contained some nice Lightning-spec parts, considerable wear was evident throughout. Refurbishment of the motor took 18 months to do properly, under Sandy’s close supervision. BLR Engineering fabricated new rocker box components, plus upper and lower valve guides, although new Omega pistons retain the standard compression ratio. Bob Newby Racing supplied a belt-driven dry clutch, which BLR installed along with an alternator. The modification required a half-inch spacer to widen the Norton Commando primary cases; a previous owner had welded these to the nearside crankcase and cut away the standard Vincent gearbox. A five-speed Triumph cluster slotted into a Nourish gearbox housing, with benefits for engine placement and rear wheel alignment, via a quarter-inch drive chain.

'First exhibited at London’s Racing and Sporting Show in January 1973, the monster stopper was claimed to be the world’s largest motorcycle drum brake and at a cost of £75, was probably the most expensive too'

Sandy modified the damping in the short Roadholder forks and lengthened the rear suspension units and swinging arm, so that the rear of the Norvin sits high to sharpen the steering. A genuine eight leading-shoe CMA front brake was then shoehorned in to the front end, laced to a Borrani alloy rim. First exhibited at London’s Racing and Sporting Show in January 1973, the monster stopper was claimed to be the world’s largest motorcycle drum brake and at a cost of £75, was probably the most expensive too. A pair of double-lipped aluminium mudguards came from Revolution Spares at a Kempton Park autojumble. The Manx replica genuine hide solo seat was modified by Sandy to incorporate a toolbox. The resourceful Scot also provided a magnesium rear wheel hub from a works Daytona BSA triple, with a rear torque arm in aluminium alloy from a Manx racer. 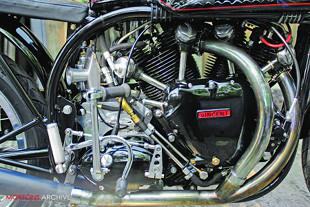 With the essential engineering in place, Mick began to apply detail touches to suit his own tastes, one example of which is the side stand. “I think that most side stands are the ugliest things going,” he laughs, as he points it out. “This Velocette Venom Thruxton stand looks lightweight but is still strong enough for kick-starting. To anyone else, probably a side stand doesn’t mean much, but to me it’s important.”

Most fasteners came from the ever-helpful Hilda at Superior Stainless, but Mick spent hundreds of hours checking alignments, machining down nuts and spacers and polishing brackets to ensure an exact fit. Lightweight clip-on Manx handlebars from Burgess Frames came with integral lever mounts and hollow levers with spring clips for the cable adjusters, Mick adding a stainless steel equalizer bracket of his own design for the twin brake cables. Sandy fabricated both fork yokes and Mick added a BSA pattern headlamp bracket, mounted upside down to hold the instruments in place when the fork top nuts were tightened. The steering damper was also a BSA item.

'the Vincent engine completely filled the frame space, meaning that oil had to be carried in the right-hand portion of the fuel tank'

Footrests mounted in correct Manx fashion on the swinging arm pivot and the oil mist from three breather outlets was vented into the nearside frame loop, which was drilled for a drain plug on its lower rail. The engine was bolted to sturdy alloy plates without chassis modifications, although the front exhaust pipe was rerouted to branch further outwards and a new BT-H self-generating magneto took up the space forward of the front cylinder barrel. Still, the Vincent engine completely filled the frame space, meaning that oil had to be carried in the right-hand portion of the fuel tank. The alloy tank was sent away to airbrush artist Colin McKay (023 8029 2354) for top-quality graphic work featuring a chequered flag, with a hand-painted trompe l’oeil border of silver soldering effect and a red coachline along the base. 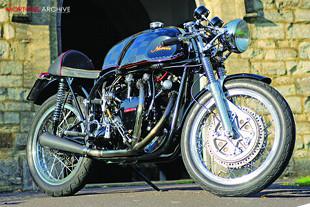 Mick finally completed his Norvin in April 2008, six years after its purchase, and chose the Festival of 1000 Bikes at Mallory Park for its first rapid shakedown run. Inevitably, there were teething troubles. “I couldn’t get going properly on track because of an airlock in the top carburettor,” he recalls. “This meant that I kept having to cut the throttle and then let the revs build up again.” The carburettor manufacturer helpfully sent six sets of brass needles on approval, but the cure was to mount an Amal GP float bowl as high as possible beneath the nearside frame rail and then spend hours getting the fuel flow right. Consequently, the Norvin was barely run-in when I first came across it, parked on the seafront during the Brighton Burn-up last September, but Mick still offered me the chance to ride it.

With both float bowls flooded, the engine fires easily on one-eighth throttle and sounds glorious straightaway, like a baritone going through his vocal exercises. My right foot depresses the Dunstall lever for first gear, then short-shifts upwards, four times flawlessly in rapid succession, until 80mph appears on the small Smiths chronometric speedometer. The big V-twin engine feels ready to pull strongly in top, but now that it’s warmed up I deliberately drop down through the box to hear it accelerate hard through each gear, for sheer delight. 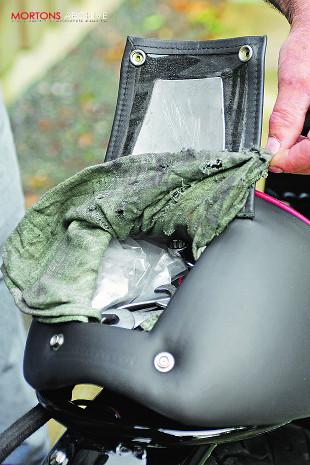 The fuel tank is jutting into my thighs and there’s a lot of weight on my wrists, making the steering feel twitchy until I slide back on the seat for comfort and relax my grip on the ’bars. There is a slight top-heaviness in the approach to corners, but the secret is to add a flick of counter-steering to the 19in front wheel with its massive brake. This tips the bike in nicely, after which it holds a line without twitching, though limited steering lock at low speeds requires slightly more than the width of a road in which to turn around. Suspension is stiff at the front and compliant at the rear, just as a well-sorted Manx should be.

The Motor Cycle tested a Vincent Twin in its issue of 29 May, 1947, and suggested that: “It may sound unreal to quote such high cruising speeds. But rapid road work is the type of riding for which the Vincent HRD was designed.” Sixty years later, I must endure early-evening commuter traffic heading west across the M25, but as the Buckinghamshire countryside opens up I have a sense of outrunning the congestion. Yes, this Norvin is every bit as fast as it looks, which is why Mick doesn’t believe in rear view mirrors. The rear brake is as effective as it needs to be, while the front brake lever offers a deceptive amount of play before it bites, after which just two fingers can make the front tyre squeal at any speed.

Rarely has riding an old motorcycle made me feel so passionate about its rightness, and part of that sensation derives from its sound. “The number one crucial thing on a British bike is that it’s got to sound right,” insists Mick on my return. “The standard Vincent sounds flat to me, but Sandy let me have an early racing megaphone silencer from the 50s. The baffle is just a flat steel plate I’ve welded on.” 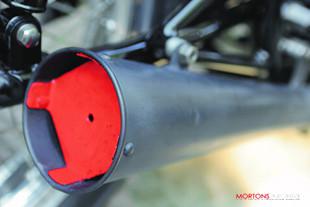 Shortly after my ride, readers of MCN voted Mick’s Norvin one of the 12 best ‘specials’ in Britain, leading to a star appearance on the Carole Nash stand at December 2008’s NEC show, where it was awarded third prize. Mick thinks it a happy conclusion to his boyhood dream, besides being a tribute to six years of his own effort and the specialist engineering skills of others. “I’ve never liked the manufactured look in anything,” he says. “All my bikes have been modified to be different, though the choice of parts makes this one as close to perfection as I can go. It’s been worth the wait to get it exactly right.”