This is the first of the brand new Norton 30M Works racers, built under the guidance of Patrick Walker and partner Miles Robinson, but fully authorised and with the complete support of current Norton boss Stuart Garner.

Patrick drew everything for the new Norton engine in six months, taking his drawings from a mixture of begged and borrowed original material, plus a lot of original and non-original parts which were reverse engineered. Bringing all these drawings together, Patrick was able to produce a CAD (Computer Aided Design) model of the engine and it was to these drawings/model the new engine was produced. 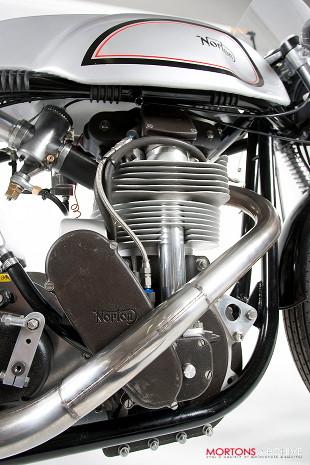 There was plenty of experience brought into the project – Patrick has a sound engineering pedigree, having worked straight from college at Shenstone for Norton in the rotary era; indeed, he sat next to Doug Hele for two years. Patrick was then project manager on the F1 model, before moving into the four wheeled industry, with among the cars he worked on the Jaguar XJ220 and the Aston Martin DB7.

In 1995 he set up his own company, Maxsym Systems, which concentrated on developing small four-stroke engines for recreational use – snowmobiles, outboards and jetskis were typical projects. Indeed, Maxsym designed and built six or seven engines from scratch.

This was all good grounding for the Norton project. Building the new machine took 12 months, with about 45 per cent of that CAD time, the rest the actual making of parts and assembly. Well-known engine builder and tuner Fred Walmsley is a consultant to the project and is actually building the first 10 engines up.

The project has more than the blessing of Norton owner Stuart Garner – indeed, the racing squad (competing in the Bonhams British Historic GP Championship) has been invited under the umbrella of Norton and is now an official factory team, with rider Glen English excelling, riding the sister bike to the one in our pictures (which is the display model) to an early lead in the championship.

The eventual hope is to build around 25 bikes per year, which will be sold through official Norton channels. The engines are now on sale with the rest of the cycle parts (with Featherbed frames built by Spondon, another Stuart Garner owned company) coming on line as the year progresses, while a 350cc engine will hopefully be built by year’s end too.