Malmesbury-based Terry Brock has an ongoing, enduring love affair with Norton’s lightweight twins, an affair that to many may seem unfathomable, but Terry is not for turning. While over the years the little lightweight twins have had their knockers, they have gradually become more popular, thanks in part due to the fact that with modern electrics, they can be improved immeasurably (which Terry acknowledges) becoming a fun, lightweight classic with the cache of a great name.

Terry is unequivocal in his support of the machines, of which he owned a number in the 60s, having passed his motorcycle test in 1964. “They thrive on revs,” he explains, and while the mechanical noise can seem alarming, apparently it does no harm. 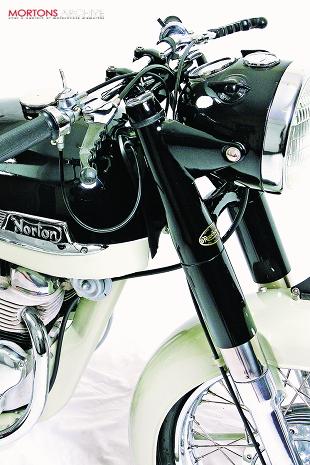 The 250cc Jubilee was launched for 1958 and was joined by the 350cc Navigator for 1960. The quarter-litre model revved to an incredible 8500rpm, which was an amazing figure in its day. The Navigator was a bored and stroked version of the Jubilee, though it was the stroke that took most enlargement (from the Jubilee’s 44mm to 56mm) while the bore only gained three millimetres.

Another important development in the 250 to 350 modification, was that the Jubilee’s flimsy-looking Francis-Barnett sourced front forks were replaced by altogether beefier – and much more prestigious – Norton Roadholders, linking the Navigator into the Norton family in a way in which the Jubilee never had been. The Navigator also featured a Dominator-type front brake, both more effective and better looking than the Jubilee’s unit.

Lightweight twins
Terry Brock is an ardent admirer of the lightweight twins, confessing to ‘loving’ the models. This one joins a host of the baby Nortons in the Brock garage (he has 11 in total!) – plus a Dominator. This particular version took Terry two years to restore, having been bought as a £200 wreck (though the sidepanels cost another £100 from the same vendor), costing Terry about £1500 to get into this gleaming state – good enough for it to scoop Best Post-war at the 2006 Stafford Classic MotorCycle Show, though it is no pampered show pony, having covered 100 two-up miles on the Monday before the event and many more since.

Many will have seen Terry’s superbly restored Nortons on the multi award-winning Malmesbury Club stands, while Terry is also an enthusiastic member of the Norton Owners’ Club.