It’s a built up area, so I’m trying hard to keep a low profile on the highly tuned ohc 500cc single. It isn’t easy. The slightly crouched riding position is comfortable, but more suited to the open road than suburbia. And a metronome-like tickover is not an option with the track carburettor, so I have to blip the throttle to ensure that the engine stays alive. Each twist of my wrist raises a staccato crackle from the exhaust, and I can imagine anxious eyes peering round the neighbours’ curtains to see if some lunatic is running loose with a machine gun.

I ease away from the roadside, and my self-consciousness instantly turns to sheer excitement. The noise is not all for show; this is a dramatically fast motorcycle. The engine produces great dollops of power from quite low revs, and the urban traffic is quickly left far behind. Once I am sure that no harassed sales rep’ is going to mount a challenge for my place on the road, I can wind the throttle open and let the motor really show its paces. 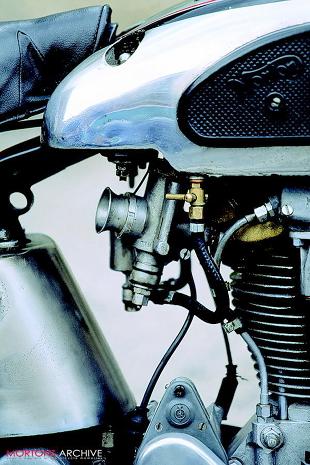 In the gears, the revs mount smoothly and quickly, 4000, 5000, 6000rpm. Time to change up, and it happens all over again. No stuttering, no temperament – and seemingly no end to the willingness to rev or to the power available. It just goes on, soaring to a top speed measured in three figures. Even at those speeds, I can hear the Gold Star pattern exhaust blaring its defiance to the convention that we should ride cautiously and quietly.

If you ride a big twin, I bet you think I’m high on Castrol R fumes. Road tests show just how much faster your 650 is, and how its acceleration would leave this 50-year-old single standing on the starting grid. Maybe, but those are just statistics. I’m talking about the experience of riding one of the most charismatic motorcycles ever – the Norton International.

The fact that this Inter is not restored to concours standard is all part of its appeal, because it is a machine with a history. It has been raced as befits such a glamorous model – and has been owned by famous characters in both motorcycle sport and the vintage movement.

The first owner of any Norton International from the early Fifties is almost certain to have been well known. With production costs reportedly exceeding the list price, the factory would simply not accept orders from any Tom, Dick or Harry. Get an entry confirmed for the Isle of Man, and use that to persuade Bracebridge Street that you could do justice to one of their finest; that was the way it was done.

Entered a Triumph
Vintage personality Willy Wilshere had actually entered a Triumph Thunderbird for the 1951 1000cc Clubman’s TT, but that was cancelled because of lack of entries. Fortunately for him, his local dealers – Lewis, Ellis and Foster of Watford – had ordered the Model 30 International for a customer who subsequently backed out of the 500cc class race. Because of Wilshere’s track record, Norton agreed to honour its promise of delivery. That was the week before the race, and with time running short, the recently nationalised rail network managed to lose the Norton! Wilshere finally discovered it standing on a station platform in Buckinghamshire the day before he was due to leave for the Island. He just had time to remove unnecessary weight, such as the battery, before riding it up to Liverpool to catch the ferry. 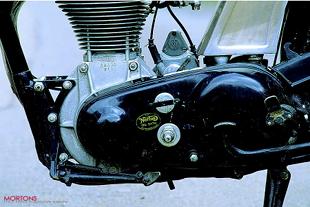 In the Island, Willy Wilshere found that the Norton’s supposedly unapproachable roadholding deteriorated rapidly when he got over 70mph. He only completed one lap before a tank-slapper fetched him off at Parliament Square. With the Inter repaired and more highly tuned, he returned in 1952 and managed three laps before being sidelined by a puncture. Apart from a couple of short circuit races, that was the extent of the Norton’s competition history. It then disappeared from sight until the mid-Sixties when it was brought to the attention of none other than Vintage Motor Cycle Club founder Titch Allen.

He sold it to his friend, Cyril Ayton, who was then editor of Motorcycle Sport. Ayton was more impressed, but eventually the Inter dropped back into obscurity until 1991, when it surfaced – neglected all over again – in a Midland dealer’s. This time, it was purchased by an enthusiast who truly appreciated it. David Downer from Hampshire restored the Inter, not to concours road trim, but in the style of an active campaigner in the Isle of Man.

And that is where he used it. A row of scrutineering stickers on the front mudguard testify to its many romps around the Island in the VMCC’s Manx GP Rally. One of David’s friends – Goff Woolford – accompanied him on these annual pilgrimages across the Irish Sea. Despite owning a series of attractive machines of his own – his BSA Super Rocket  was featured in The Classic MotorCycle in January 1996 – he became besotted with the International. If you could ride alongside it and see and hear how it goes, I guarantee that you would feel the same way.

Take over ownership
Eventually, Goff was given the chance to take over ownership, and he didn’t need to be asked twice. He even sold two other Nortons to finance the deal. One of them was an ES2, tricked up to look like an Inter with a bolt-through tank and other goodies. “I thought that the ES2 went well,” he says, “I’d overbored it to increase the capacity by 45cc, and had the crank balanced, but the Inter was a revelation in the way it would produce power throughout the rev range.”

He is so right. It is even mechanically quiet, or at least it is compared with the bellow from the Gold Star style silencer. And it doesn’t splash out oil like cammy Nortons are supposed to. What little there is gets soaked up by pieces of sponge strategically tucked into the hairpin valve springs. 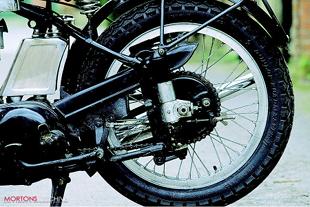 All long stroke Nortons are reputed to vibrate. When Titch Allen bought this one, it had a broken frame tube, which he blamed on the vibes. What has happened in the meantime I don’t know, but apart from a slight roughness at about 3000rpm, this one is like silk. At double that engine speed, the only sensation is of the landscape sliding past in an eye-watering blur.

What about the reportedly dubious handling though? Comedians used to say that Norton’s Garden Gate frame deserved its ‘Unapproachable’ trade name because other competitors would not dare ride too close to one. Well, I’m no fan of plunger suspension, but it gave me no qualms whatsoever. Owner Goff says that; “it weaves a bit on bends at over 90.” I’m not totally surprised by that revelation.

Remarkably docile
One thing on which all observers agree is that the International motor is remarkably docile. I initially thought that its good behaviour would not extend to easy starting, though. The kickstart swing is restricted by the rear-set footrest, even though that can be hinged up, and the gaping Amal TT carburettor is not noted for anything other than top end performance. But once I discover the throttle needs to be completely closed to get enough suck on the idle jet, a single lazy prod usually has the motor throbbing away.

The manual ignition can immediately be advanced and then forgotten, as long as the revs are kept above 1000rpm. With the ignition retarded, the Norton will tick-tock along at little more than walking pace in first, even on its close ratio TT gears.

Goff Woolford is in the familiar dilemma of owners of well-used machines like this – to restore or not to restore. He has almost decided to stick at replacing the lining on the oil tank. And he will correct a slightly dragging clutch. I’m sure that not overdoing the restoration is the right decision. In fact, I suggest that it might be an idea to take some of the shine off the silencer to blend it in with the rest of the machine. 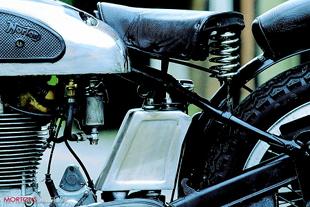 Of course, a Goldie silencer is not the right wear for an Inter, but it doesn’t stifle performance, looks good, and sounds marvellous. In contrast, an open pipe which would release all of the available power is clearly not a good idea for road use, while the standard roadster item reduces the top speed by about 15mph.

What Goff doesn’t need to do is touch the motor. It is obviously in excellent nick and is as mechanically quiet as anybody could expect of a device whose origins lie way back in the early Thirties.

I don’t know why simply moving the cam from the side to the top of a venerable engine design should make such a difference, but believe me it does. In one of his more benign moments, past owner Titch Allen wrote that his old International provided “…a ride with the gods.” I cannot better that.