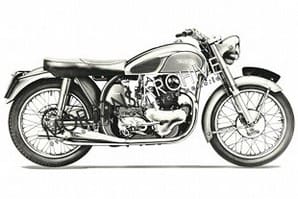 When the Featherbed frame made its bow, little could those who witnessed its triumphant debut have realised that for the next 20-odd years, it would be the benchmark by which others, in motorcycle handling terms, would be judged.

And most riders who experienced the thrills (and occasional spills) of Norton Featherbed handling, did so with the twin-cylinder models. Sure, a few were lucky enough to have experienced a full-blown Manx while others had to make do with over-framed, underpowered pushrod singles – but for the combination which gave most a taste of race-bred handling on the road, a twin was the one which they experienced.

Indeed, even the factory took to racing them, while the likes of Paul Dunstall did too. The machines were, if anything, the true ‘sporting motorcyclist’s’ road-going weapon of choice for much of the 1950s and 60s.

Riding impressions
There is a noticeable difference in the riding experience betweeen most incarnations of Featherbed-framed twin cylinder Nortons. Many find the early models rather wide across the seat for their liking and comfort, while the bigger jobs – particularly the Atlas – have plenty of poke, but are a bit ‘vibey.’ It’s why Commandos had Isolastics…

1953 Norton Dominator
After the Manx had appeared it was a case of ‘when’ and not ‘if’ a production version would appear. First listed in late 1951, it was ‘export only’ and featured an ugly front mudguard and all-over silver finish. Shown is the much more handsome 1953 model.

1960 Norton De Luxe
Launched for 1960, the ‘De Luxe’ with semi-enclosure of the rear wheel and finish option predominantly featuring ‘dove grey’ and either light blue or black, with green, cream and red all later used. Also introduced (more significantly, in the long term) was the slimline frame.

1961 Norton Manxman
For 1961 there was the Manxman; finished with a polychromatic blue for the cycle parts, with a red seat, it was unashamedly pitched right at the US market with what they demanded; colour and cubes. The stroke was lengthened to achieve the capacity gain.

1961 Norton 650SS
Originally a version of the Manxman, the 650SS, with a genuine maximum speed of over 110mph, was a true performance rival to the Rocket Goldie and the Triumph Bonneville, benefiting of course from Norton’s legendary roadholding. Made until 1970.

1962 Norton Atlas
And they wanted yet more cubes! The 745cc parallel twin was the biggest capacity machine offered by the British industry on its for-1962 launch. It was initially ‘export only’ and offered until 1968 – when the Commando took its engine and its place in the range.

1969 Norton Mercury
Last of the line and one of the best. Though it had a bit of a ‘parts bin’ special look to it, with its humpy seat, black frame, silver tank and blue mudguards/oil tank etc., it gained (and maintains) a loyal following. It was finally phased out in 1970, the last of the old stagers.

Visit the Mortons Archive for more information and online search options concerning BSAs, or speak to our archivist Jane Skayman on 01507 529423 with your requirements. Email enquiries@mortonsarchive.com