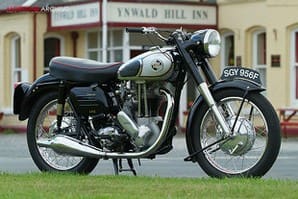 By the time Tony East’s ES2 rolled out of Bracebridge Street in 1955, the model had been around for over a quarter of a century or, to put it another way, for half the average British man’s working life. And just like a sound, time-served employee, the Easy Two is accomplished, sturdy, spirited and always dependable. There still are many accomplished workers today, just as there are modern cutting edge motorcycles, give me a solid motorcycle like this Norton – though fitted with 12V lights, indicators and a disc brake – and I’d fork out for a new one today.

As it was for many firms, the late 1920s were a time of struggle and change for Norton. Unemployment was high, and makers were forced to shave every last pound from catalogue prices just to secure those extra sales to keep the cash registers rolling, and the business one step ahead of the bankruptcy courts. Even those in secure employment were fearful for their position and worried that their next pay packet may be their last, thanks to the depression. 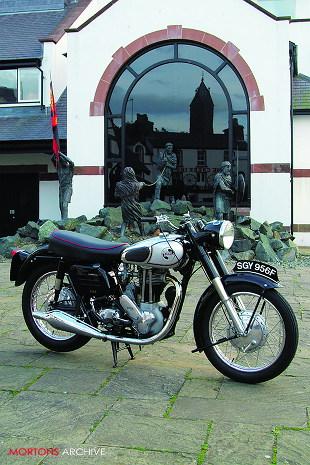 Against this background, Norton was introducing models and refining their range while adopting new working practices, including in 1929 their own – in house – chrome-plating plant. Recent catalogue additions included the Walter Moore designed cammy models – for which Moore was, at first, the flavour of the month, before the taste soured and he moved to NSU – and then for 1928 the ohv Model 18 type 490cc engine was dropped into a cradle frame for the first time to give us the ES2; in effect a sports ohv model, though perhaps by Norton’s standards a fast tourer. An odd way of looking at the situation, but other than the 633cc sidevalve Big 4 which was envisaged as a sidecar tug, all 500cc Nortons – including the sidevalve 16H – still sported big, lumpy cams and were among the quickest in their respective classes.

As the years rolled by, the ES2 became a little more portly – not that 500cc Nortons were ever lightweights – but its heart remained the same gutsy pushrod single, albeit updated, it started life with. The model weathered WWII from the ringside, but was back in Norton’s first proper post-war range, announced in September 1946.

Still sharing the same longstroke 490cc pushrod engine with its cheaper sibling the Model 18, the ES2 was now fitted with the famous Roadholder front fork, which had become common across the Bracebridge Street range but, unlike the Model 18, it had a spring – plunger – frame. Priced at £180 it was a cracking buy for the fast road rider, tourer or local club racer who wanted Norton quality but didn’t want to fork out the extra £50 for a cammy-engined International. 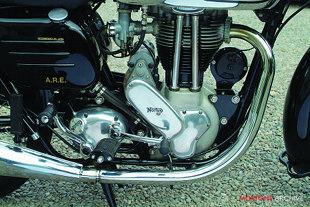 Into the 1950s and against a background of extreme National financial constraints, hire purchase restrictions, rationing of raw materials such as steel, the takeover of Norton by AMC and even legislation limiting those UK citizens heading overseas to just £25 per year  travelling money to take abroad, Norton revamped the range again. True, the Dominator was on the market, Featherbed frames had been with us since 1950 – although they were just for racers and export only Dommis – when news came from Bracebridge Street in October 1952 that plunger rear suspension was giving way to a full swinging arm design. Certainly not on a par with the standard-setting Featherbed, the new effort was more a plunger frame re-worked. Never-the-less it uprated and modernised the chassis for better comfort and handling. And it’s that frame which is wrapped around the engine on this super 1955 490cc single.

Despite changing times at Norton, the ES2 continued, almost like a worthy throwback to past times. In the mid-1950s, around 10,000 machines of all models were rolling out of Bracebridge Street every year, including many twins, namely Featherbed-framed 500cc 88s and the standard frame 77 and, in relatively small numbers, the single-cylinder ES2. For 1956, another twin, the 600cc Featherbed-framed 99, joined the range. Gradually, some Bracebridge Street enthusiasts were beginning to feel Nortons had more than a little AMC look about them and, while the factory picked up new customers, it undoubtedly lost regulars who had a purist streak in them. 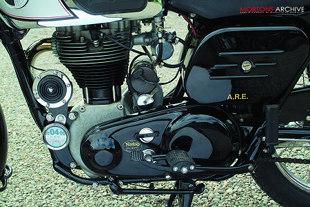 By the end of 1957, the Norton single cylinder range was down to just three roadsters; the 348cc Model 50, the 490cc ES2 and 596cc 19S. The cammy Internationals were gone, although the Manx continued in limited production. During February 1958, tough Brummie businessman Gilbert Smith, Norton’s MD from 1945 and at Bracebridge Street since 1916, was given his cards and towards the end of 1958 the standard swinging arm frame was given the chop too, as was the 19S. The Model 50 and ES2 remained, both now in Featherbed chassis.

Bravely, the two remaining singles plonked on, until the axe fell in 1963, ending the 35 year run of what for me was one of Norton’s delights, the ‘Easy 2’. Also gone were MD Alec Skinner, who resigned in Summer 1962, with racing inspiration Doug Hele following two months later. Finally, in February 1963 the long-dreaded move from Bracebridge Street to Woolwich was completed.

For my money Tony East’s ES2 is one of the last truly Norton Nortons, before the London influence became increasingly apparent. However, you needn’t worry too much about my biases and outlandish opinions; I have in the past claimed the last ‘real’ motorcycles were built in 1928 after which this new craze for saddle tanks took over – it’ll never catch on…Well, enough of that nonsense; lets take Tony’s Norton out on the road where it belongs. 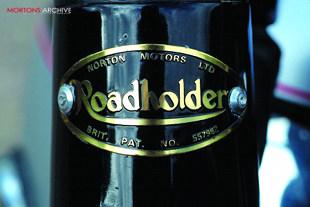 Little is known about this particular single, so we needn’t spend too much time worrying about its history and instead concentrate on enjoying the motorcycle for what it is. Bought some years ago in West London wearing its current F-prefix registration, it was given the thorough ARE restoration and formed part of Tony’s collection at Farnham, Surrey where many of you may have seen it. Now retired, Tony and partner Pat have upped sticks and moved to the Isle of Man, Tony taking his motorcycle collection with him. And where better to try the ES2? With plenty of near-deserted lanes to explore and the odd quick dash from Glen Helen to Kirkmichael, Sulby to Ramsey or anywhere the whim takes you, it’s a motorcyclist’s delight.

Having recently ridden a plunger-framed ES2 with Roadholders for a 150 mile round trip, I’m instantly surprised how different the swinging arm version feels and the chassis responds. While I like the sit-in riding position the plunger frame offers instead of the almost perched on top stance of the swinging arm chassis, on the handling, steering and comfort stakes the later model wins hands down. Not that the plunger Norton frame is bad; it isn’t, and is as good as the type gets, it’s simply that the swinging arm variant is better. In itself that’s not surprising; however, by how much is the surprise.

Longish reach
With long legs, I sit a little back on the dual seat and given the longish reach to the bars, these factors tip me nicely forward into a riding position I enjoy. And whether it’s reality or in my mind, the leaning forward stance appears to sharpen the steering even more, to give far above average control. Even greater is the manner in which the Norton holds its line perfectly round bends, even when pushed along on some of the rough surfaces found on the byways of the IoM. No skipping or jumping, just rock-solid, unflustered cornering. And think how much better a Featherbed frame would be…

While my enthusiasm abounds for the chassis, I can’t work up much steam over the brakes. Average sums them up. Used together they manage to pull up 550lbs of motorcycle and rider safely and within living memory, but individually they’re not that hot which is a blow for me, as I’m a front brake man. However, I soon adapt to relying on a 50/50 effort from each end rather than my usual 80 per cent front reliance, and with a bit more input from me I’m happier. 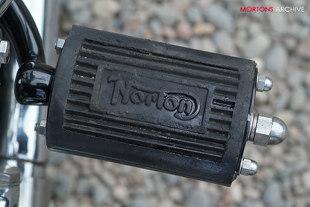 ter hot or cold, if it’s not running in two kicks then it’s operator error. On the one occasion I flooded the engine, the third determined boot with the throttle wide open brought the Norton into life and despite a puff of black smoke as the excess fuel cleared from the cylinder, my blushes were spared. Thanks Norton.

Out of racing weeks, Island traffic is light giving me little chance to slog the Norton through any snarls which are so common on the mainland, but I’m sure it would be fine. At 30mph, it tick-tocks along quietly in top without snatch, pinking or any other nasty habits and out of town it turns on the charm. High revs, low revs or anywhere in between, the 490cc motor delivers generous smooth power, seemingly far in excess of the claimed 29 horses on tap. And while it’s both fun and not difficult to have the ES2 in the right gear on every occasion, the lusty motor saves the day should you manage to get it wrong.

Comfortable cruising speed is anything between 30 and 65mph.  The Norton’s flexible engine lets you vary speed with no more input than moving the twistgrip. And within this range the motor is totally vibration free. Period writers claimed vibration began to build up from 70mph, but this a 50-year-old motorcycle and it’s not my role to break it, so I’m not going to try.

Particularly useful in hilly country is the engine’s generous torque from even quite low revs, making my climb from Peel Harbour back to Kirkmichael a joy. Equally, the motor easily controls the motorcycle’s descents too, with added braking effort only needed on really steep drops. 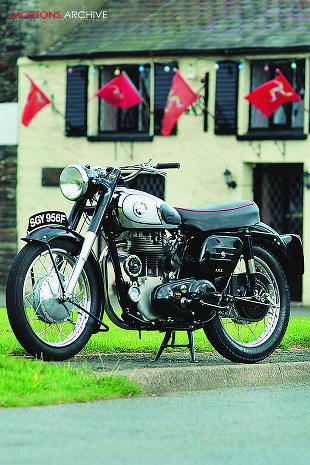 Many claim Norton gearboxes, based on a long defunct Sturmey Archer design, aren’t that special. Not me. While lever action needs a long sweep, rapid totally silent changes are easy. In fact, as far as I’m concerned, the quicker the action, the easier the change. Equally, clutch action is sound, the machine a piece of cake to get away even on a steep incline and repeated changes do nothing to detract from its action.

Surprisingly for a relatively heavy motorcycle, low speed manoeuvrability is good, and even with feet up at walking speed the machine proves easy to balance with no tendency to fall into sharp corners – modern makers please note! Pushing the machine around the workshop calls for no great skill, although for stability it helps to nestle the tank against your hip – after all, this is a heavy motorcycle. The short or very light rider might struggle heaving the Norton onto its centre stand but a little thoughtful technique will have the job sorted.

Riding back to Tony’s home, test and photoshoot over, I slide into a musing mode. Although a BSA rather than Norton fan, I really enjoy the ES2 experience once again and am happy. It’s by no means a perfect motorcycle, but it’s pretty dammed good. Yet by 1955 the popularity of traditional lusty big singles was on the wane and reliance on the dwindling sales of such machines was beginning to drive nails into the company coffins.