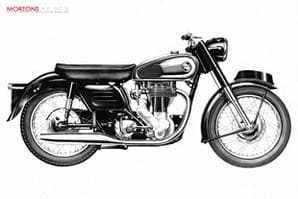 The Norton ES2 is, for many, the quintessential British single. In the first issue of The Classic MotorCycle (June/July 1981, reprinted with our June 2011 issue), a ‘Mini manual’ was published for the model; here, we illustrate the major changes.

1949 Norton ES2
The ES2 – which had been in the Norton range since 1928 – made its post World War Two appearance in 1947. Equipped with plunger suspension (as the ohc International) from its launch, it boasted the same 490cc overhead valve engine as the rigid-framed Model 18. At the front, were Norton’s famous Roadholder forks.

1951 Norton ES2
By 1951 the ES2 was somewhat modified from its launch specification, with the biggest and most obvious development the new ‘laydown’ gearbox, designed to give a shorter travel on the gear change. The ES2 was still running alonsgside the rigid Model 18 at this time.”

1957 Norton ES2
There was a new pivoted fork swinging arm frame announced in 1953 – not a Featherbed, though, but a structure based on the front of the existing single front down tube with a new rear end added. The frame was shared with the Model 7 twin – as the earlier plunger job had been.

1959 Norton ES2
Finally, for 1959, fans of Norton’s single received the news they’d been waiting for; the famous, venerable old single cylinder motor was to be housed in teh world-famous Featherbed frame. There was also an alternator the same year. In truth, the frame was ‘faster’ than the engine – hence many ended up as Triton ‘donors.’

1961 Norton ES2
When the ‘silmline’ version of the Featherbed frame came about, it was used initially on the twins and then, from 1961, on the singles too. Otherwise, much remained as the wideline, though there were smart new paint schemes, which made the machine’s look more modern.

1964 Norton ES2
An example of badge engineering in what – many would argue – was its crudest form, the ‘Mark two’ was essentially a Matchless/AJS single, though equipped with Roadholder forks, which were basically – apart from the badge – the only Norton bits on it. Production ended in 1967.

Owner’s experience
“I owned my ‘Garden gate’ (plunger) ES2 for about two years. It proved a solid and dependable machine, though its physical size seemed much larger than many of it contemporaries. It seemed a big bike.

“My machine had some wear in the rear suspension, which tended to make things slightly, er, interesting and made it feel much more unwieldy than a fresh machine surely would.

“The engine, though, was lovely, strong and full of torque. It was an all round nice and pleasant machine, though absoltely not a sportster, much more suited to plodding on than pressing on.”