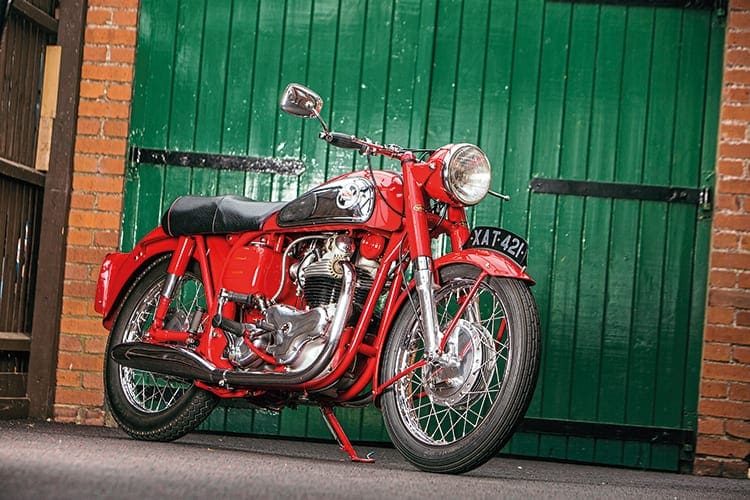 Norton produced excellent (if conservatively finished) motorcycles until a couple of pints of red paint found their way into the paint shop.

According to that great online source of almost accurate information, 1957 was the year the UK population had never had it so good. I thought it was 1959, but for the purpose of this introduction, 1957 will do. I’m sure a large number of readers will know that Prime Minister Harold Macmillan made that bold statement, but the claim that 1957 was the happiest year ever has been backed up by serious research and to condense all that academic stuff into a few words, the gist of it all was the world was changing and the population was looking to the future… a brighter future. At least the members of the population who weren’t involved in designing paint schemes for Norton, that is.

The problem was that the biggest market for motorcycles was the US, where things were bigger, brighter, brasher and shinier, or at least they appeared to be. Norton’s range of Dominators were good motorcycles and had the kudos of being associated with the racing Manx models thanks to the Featherbed frame being the benchmark for superlative handling, but even the successful race bikes were painted in tones of silver-grey and black, which looked very distinguished and very monochrome. Attempts to brighten the range were dismissed by an increasingly out-of-touch management, until one brave soul managed to produce a colourful batch of Dommies heading for the US.

As well as the red seen here, there were also blue ones and legend has it that when they found out about this departure, the board members were less than impressed, viewing it as a serious incident. How did they find out? The Berliner Corporation, AMC’s distributor in the US, telegrammed a request for more of the red and blue models. “But we don’t do red and blue models,” claimed the sales department “Yes, you do, we’ve just shifted the last batch in record time.” Thankfully, common sense prevailed and the experiment with the colour palette was officially sanctioned and some even made it to the UK, which is where Glenn Barker’s example comes in.

“I bought it as a part-finished project from a chap in Devon,” says Glenn. “He’d bought it as a restored bike from a chap on the understanding it was a Devonshire motorcycle, which was the theme to his interest, being a Devonshire lad. Turns out the Norton was from Kingston-upon-Hull, so the owner lost interest in it after doing a fair bit of work.”

What Glenn inherited when he took the ‘99’ on was a bike on which some of the paintwork had been done, all of the chrome had been done and some alloy polishing had been tackled. “As far as the paintwork goes I did the petrol tank, the mudguards and oil tank too and the alloy polishing on the engine and gearbox castings,” says Glenn. Also to do was a full engine, gearbox and primary drive rebuild and a gearbox cover shield to make. In the days before unit construction arrived, these covers were a simple pressed steel item that slipped over the engine plates to tidy them up. They were light, easily damaged and easily lost over the years but not a problem for the retired engineer to make in his compact workshop. “I’ve welding gear, a bench, a drill and access to a lathe, so I can cope with most things.” One of the tasks Glenn does himself is to fettle up the dynamos on his restorations. “It’s not a difficult task,” he says, “and I leave them at 6v too, as with magneto ignition that’s more than enough to power the battery when all it’s got to feed is the lights. The magneto went to Tony Cooper for refurbishment and is spot on.”