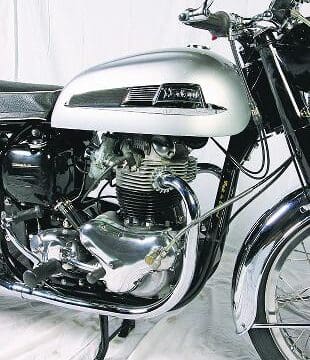 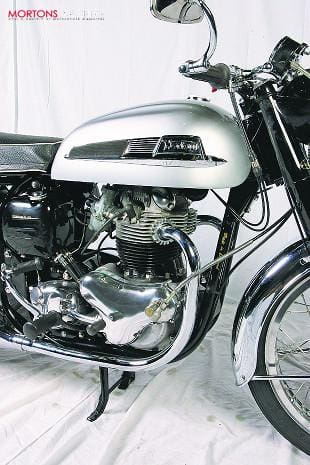 This Norton Dominator 650SS was restored in quick time by retired Stoke based engineer Bob Francis, who bought it at the Stafford October Classic Motorcycle Mechanics show in 2007. The Dommie was up, running and stunning in time for the April Stafford show.

Bob, a long time Norton man, started his riding career aged 17 on a Bracebridge Street built machine. “It was a 350cc Model 50 with girder forks,” he remembers. “It was my only form of transport and I used to have to restore it every year then!” It was obviously a good grounding, to which his 650SS bears testament. Why a 650SS though?

“A friend of mine used to race one at places like Darley Moor and I’ve had 88s and 99s, so I fancied a 650SS this time,” explains Bob. He tends to favour restoring Nortons, although not exclusively, having also ‘done’ the odd BSA and an Ariel Huntmaster, working the same way – doing one at a time then showing it at Stafford, before moving on to the next project. However, he says of this 650SS, “I’m hoping to keep it and give it a good ride.”

And a good ride was what the 650SS should be capable of providing. Teaming Norton’s legendary Featherbed frame – by now in its slimline configuration – with a powerful development of the pre-unit OHV twin cylinder engine, the Norton was not only a favourite with the racers on the road, but found success in production racing on the track too, notably ridden to victory in the 1962 Thruxton 500 by Brian Setchell and Phil Read.

The 650SS had been introduced to top the 1962 range, replacing the 600cc 99. The twin-carb 650SS was soon joined by the 745cc Atlas – though this only had a single carb, hence the 650SS could still perhaps be considered the range-topping sportster. The sporty 650SS was given extra cache by dint that the cylinder head was a development of the one used on the Domiracer, the Doug Hele-developed twin Tom Phillis had ridden to third place in the 1961 Senior TT.

Though the Atlas and the 650SS were quoted as producing the same power output, the bigger motor gave more torque and a wider power band. However, the 650SS was popular enough to be voted Motor Cycle News’ Machine of the Year though times were changing at Norton – as part of the AMC conglomerate, production was moved to the headquarters of the firm, Matchless’ base in Woolwich. The 650SS remained into production until 1968, when it was replaced by the single carb Mercury, which in turn was dropped during 1970.