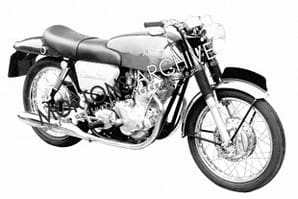 Initially, the Commando was somewhat derided for its rubber mounted engine, swinging arm and rear wheel, and the styling as first displayed was toned down by the time production was started, with the first ones delivered in May 1968.

Owner's view
“If the ingenious isolastic system is set up correctly, then the Commando is one of the nicest bikes you could ever wish to ride. Once into top gear there's barely any need to change such is the torque. Handling is exemplary, as good as its Featherbed predecessor, and the brakes as good as can be expected – though aftermarket kits can bring it up to modern standard. Long distances are no problem, especially with the five gallon Interstate tank, fuel consumption is good, even better with an SU fitted, and the lazy engine will cruise all day at speeds in excess of the legal limit. Perhaps a tad tall in the saddle for the shorter legged among us but beautifully balanced on the move and easy to control in town or the open road. Don't forget, the Commando won the Machine of the Year competition for five years on the trot. A brilliant ride in its day and even better now.

1968 Norton Fastback
The first incarnation, though styling was a watered-down version of what had been shown in 1967; gone was the orange seat, while the green ‘blobs’ on the petrol tank only lasted a few months too. The Fastback was listed until 1973, only ever in 750cc form.

1968 Norton Interpol
The prototype Interpol was created during 1968 and orders soon followed from police forces and other services from around the world. There were detail differences from standard – for example a steel Atlas-type petrol tank – while it went through the series, the last made during 1976.

1969 Norton S-Type
That rarest of things –  a motorcycle which looks best from its primary side! The S-type came along in 1969, as a successor to the popular (especially in America) P11 ‘desert sled.’ The S retained the Isolastic engine mounting system and only lasted until mid-1970.

1970 Norton Roadster
For 1970, the Roadster appeared – and proved an instant success, particularly in the US. It was to go on to be the most popular selling variant of Commando, going through various incarnations, ending with the 828cc engine, while the 750cc variant reached MkV in 1973.

1972 Norton Interstate
Launched for 1972, the Interstate was aimed squarely at the ‘touring’ market. Boasting a five-gallon petrol tank, deeper filled seat and a low-level exhaust system (borrowed from the Interpol), it was in the range till the last, ending with 828cc, front and rear discs and electric start.

1974 John Player Norton
Announced for 1974, the John Player Norton took its cues from the successful factory racers, basically being a cosmetic kit which was hung on the chassis of a standard (not tweaked) 828cc MkIIA, it was hoped to produce a run of around 1000, though the number was actually around 200.