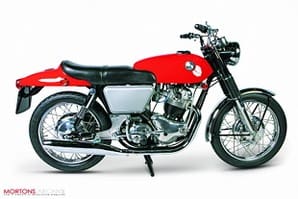 Reading-based Peter Weait is no stranger to these pages, his S-type Commando having been featured previously, plus we’ve a rare R-type that will be appearing some time in the future. But in this issue, we’ve decided to focus on – literally – his immaculate early Fastback Commando.

It was at the London Motorcycle Show of 1967 that the Commando was sprung on a largely unsuspecting show crowd. Norton of course still had a proud reputation for fine handling and sporting performance – indeed, the firm’s Manxes in 350 and 500cc forms still made up a considerable amount of the machinery in top-level race meeting, including grand prix, despite the model having been discontinued in 1963. But the prototype Commando was perhaps not all it seemed. It hadn’t been years in the planning, wasn’t the result of many months of hard toil and tough decisions; in fact, it had been thought-up, developed and named in a few weeks and wasn’t even a runner. The paint had been sprayed on with car touch-up aerosols (though nobody would have known) but the two most shocking aspects of the design were that a) the world-famous, legend-in-its-lifetime Featherbed frame had gone and b) the engine was now rubber mounted. Many asked ‘What have they done?’ and seemed aghast – this viewpoint was given further credence by the new, trendy and slightly bizarre ‘green blob’ tank badge dreamt up by the Wolff Olins design agency.

Peter, who recommends the Norton OC and Norvil as great aids to the Commando restorer, isn’t just passionate about Commandos – he’s known in some circles as ‘P11 Pete’ owing to his love of the big, raucous, vibratory desert sled twins that were a product of the AMC group. But as Pete says, though the P11 is better for a ‘pose’ a Commando is the more comfortable option for a ride of a reasonable distance.

One of the great ironies of the Commando line is, of course, that as time progressed, so the styling seemed to regress. Rather than evolving and becoming ever-more cutting edge, gradually the Commando became a more and more ‘traditional’ Norton (in much the same way, in fact, as the Triumph Trident), leaving the Fastback as a reminder of a brave attempt at moving motorcycle styling on.