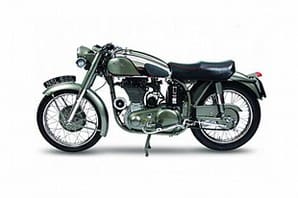 Norton’s International was one of the glamour models of the British motorcycle industry, before and after WWII. The overhead camshaft Norton could trace its lineage back to the 1920s, and the Walter Moore-designed CS1. After Moore left Norton for Germany and NSU in 1929, the overhead camshaft model was substantially redesigned by Arthur Carroll.

The ohc Norton engine went on to power the majority of both Junior and Senior TT-winning machines through the 1930s, with riders of the calibre of Stanley Woods, Jimmie Guthrie and Harold Daniell.

The first double overhead camshaft version of the Norton engine appeared in 1937, though the road-going International remained – and was to remain – sohc throughout its lifespan.

Post WWII, the ‘Inter’ was restored to the Norton range, now with plunger-type suspension – the ‘Garden Gate’ frame – and Norton’s famous hydraulically damped Roadholder forks. The race-only Manx featured similar cycle parts, but a clear distinction between the two models was being drawn, and the differences between the Manx and the Inter were to grow wider.

McCandless frame
The famous McCandless frame was introduced on the ‘works’ Manx races for 1950, with Geoff Duke – who had won the 1949 Clubmans TT on an Inter – to the fore of the successful race effort.

The road-going Inter gained the Featherbed frame for 1953. For 1955 there were changes, to a welded subframe and full width hubs, while the Inter disappeared from the listings in 1956. The model continued to be built in very small numbers to special order until 1958.

This first year, 350cc Featherbed International was repatriated from Australia by owner Bill Bewley. For Bill, a company director from Ambleside in Cumbria, the purchase of the Norton represented the fulfilment of a lifelong dream. “I couldn’t afford one when I was a lad,” is his simple explanation as to the motivation for buying the Norton. It took Bill two years to restore, and he credits the Norton Owners’ Club, cammy expert Stu Rogers and Douglas Tyson. Bill also praises Customs and Excise, who arranged the import of the Norton at a reasonable cost.

Bill puts the cost of the restoration at £4000, and offers the following advice: “The frame and engine numbers should match, while the original polychromatic grey is the same as Volkswagen Platinum!”