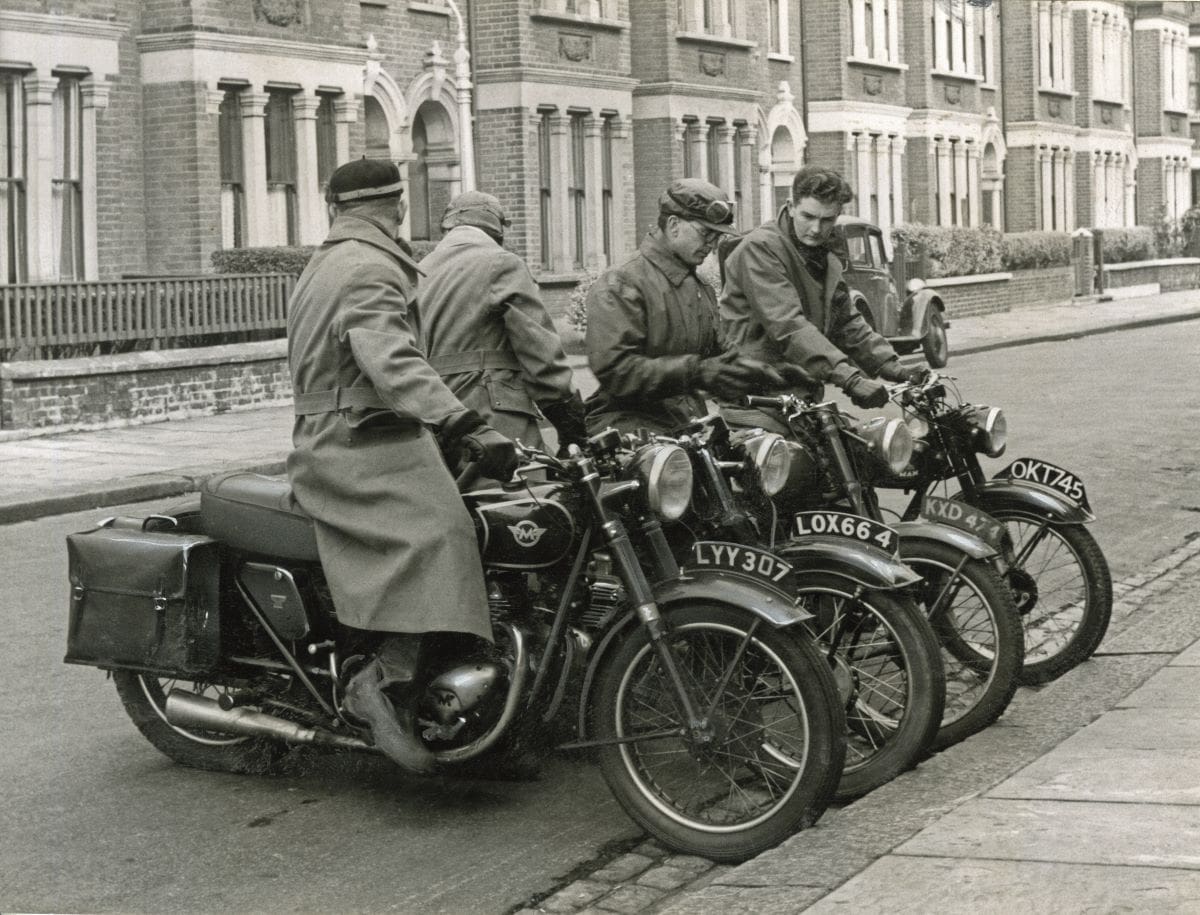 Members of The Motor Cycle’s editorial team take to the residential streets, for a noise testing experiment.

The sound made by motorcycles has long been a source of consternation and debate, one which still rages today, but which, in 1952, The Motor Cycle chose to investigate, using a modern, newly available piece of equipment – the noise meter.

The devise used was made by Dawe Instruments Limited, founded 1945. The firm later changed its name to Lucas (yep, the self-same Joseph Lucas company) Dawe Ultrasonics, then formed an alliance with American company Branson, with the British arm later making products under licence.

At the time of The Motor Cycle’s test, though, the noise meter was being made in Hanwell, Ealing, west London, while The Motor Cycle ‘research team’ first took the meter out in Oxford Street, to record some general noises.

After an explanation about how and what noise testing was, and how it was monitored, The Motor Cycle crew set about recording some background comparisons, so that readers would be able to put into some kind of perspective what they were reading, in an article which was published in December 1952; so 70 years ago this year, and slap bang in the middle of the period between when the current Queen had ascended the throne (February 1952) and her coronation (June 1953), the time when Britain was coming out of its post-Second World War greyness and into a bright, brave new era, encapsulated by the incoming 25-year-old monarch. And by technology like the noise meter.

In Oxford Street, some recordings were made – ‘general noise level, no traffic close’ was 64 decibels (or db), then a bus ticking over 72db, taxi at 30-35mph, sports car at 40-45mph 88db, accelerating bus 94db. A small note was added underneath: “For comparison it is interesting to note that a typewriter placed on a wooden desk gave a reading of 67 to 68 decibels at about 4ft range. The general noise in the office when the typewriter was not in use was 42 decibels.”

Then it was out with the motorcycles, four of which are shown above, these being (from nearest, to furthest) Matchless G9 Super Clubman, Ariel Square Four, then 197cc James and Norman two-strokes, which would both be powered by the same Villiers engines. The riders are, again nearest to furthest, editor Harry Louis, assistant editor George Wilson, ex-racer and road tester Vic Willoughby, then ‘J H Everest, sound meter operator’.

Other machines brought along on the day were a 45cc VelocSolex autocycle and a Ford Anglia car.

At ideal speeds the Ariel and the Velosolex (64db) were quietest, though the car bettered them at 57. Loudest motorcycle was the Norman, at 73. Things of course changed at different speeds, the only (almost) constant being that the car was quietest, the only time it being bettered was by the autocycle under ‘normal’ acceleration – though the VeloSolex didn’t take part in the harsh acceleration, cruising at 30mph, overrun at 30mph and accelerating uphill tests, for obvious reasons!

Of the four motorcycles, consistently the Square Four was quietest, though it was no match for the car, explained The Motor Cycle: “The Ford Anglia is a sedate family saloon with appropriately sedate performance. Yet if the Ariel Square Four is compared with the Ford – and the Ariel has a remarkably high performance – the excess noise over that of the car is only 2db on normal getaway and 4db when cruising.”

Loudest of the motorcycles was, probably unsurprisingly, the Matchless, which recorded 101db, the highest number of the day, in the ‘accelerating uphill’ test – though still somewhat shy of 105db, which is the usual static track noise limit in the UK, though it can differ from circuit to circuit. So no open meggas allowed!

Though the Matchless does look like it has open megaphones fitted, it was just a styling exercise, peculiar to just the Matchless twin range – its sister AJS Model 20 had conventional tubular silencers. The Matchless in our picture was described as a ‘G9 Super Clubman,’ but no further detail was given in the article, though more research and investigation revealed its usage in an article in February where it was described thus: “A two-year-old staff Matchless Twin with over 17,000 miles to its credit.” This time, it was used to tests different fuels and compression ratios, recording a best speed of 84.04mph. One reckons that at that speed, the noise would have rather been bellowing out.