Nick adjudged Ross Isaacson's beautiful moody foresty shot with beams of sunlight breaking through the trees as his favourite. Ross from West Midlands took the picture of the 1940s BSA single in late March 2012 with a Panasonic DMC LX5. His caption read: Almost ready for another day’s riding after wild camping for one night in Newborough Forest while touring lovely Anglesey for several days. 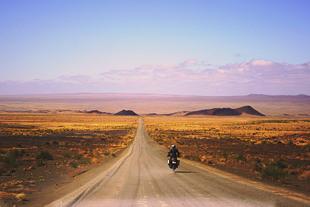 Runner-up was Roddy Warriner from Slough with his beautiful bike disappearing on horizon shot. His caption read: On a bike you’re in a world of your own wherever you are, so may as well have the best of traffic free roads. And we wouldn't disagree with that.

Third placed winner was John Edwards from Flintshire, with his powerful black and white shot. John's caption was: Terry Dyer, 250cc Suzuki at the ‘Grandfather’s Bottom’ course in Hampshire, 1972. It was photographed with a Pentax Spotmatic using Ilford FP4 film at 200ASA. Lens was a 100mm Hanimex. 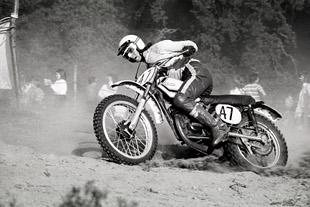 First prize is a Panasonic Lumix DMC-FZ200 12.1 megapixel camera and kit from Comley Cameras, worth £600, and a canvas print of the winning image, also supplied by Comley Cameras.

Second and third prizes are a year's subscription to The Classic MotorCycle and Bonhams auction catalogues.

All three winners will receive a pair of complimentary tickets for the 33rd Carole Nash International Classic MotorCycle Show held over the weekend of April 27-28, where the prizes will be presented by Nick Nicholls on the Sunday.

Congratulations to our winners, and thanks to everyone for sending their images in. The standard of work was incredibly high. 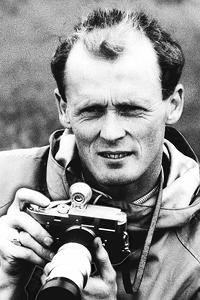 lls
The new Nick Nicholls Award takes its name from Brian ‘Nick’ Nicholls, one of the leading names in motorcycle photography from the 1950s right into the 1980s.

Mr Nicholls covered just about every branch of motorcycle sport from motocross to TT races, sprints, trials and speedway races.

During the course of his career he met and photographed some of the great characters of successive golden eras in racing including Mike Hailwood, Giacomo Agostini and Jim Redman. In 2003 he sold his extensive archive of images to the archive of Mortons Media Group where it now has a permanent home and will continue to be enjoyed and appreciated for generations to come.