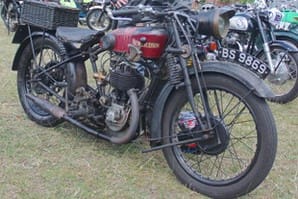 The bike, he said, was a 'bar find', rather than a 'barn find'. The explanation was that  the bike's owner had kept it in the bar of the pub he ran in Whitley Bay. For some years, the bike was, emphatically, not for sale. However, times change and financial constraints meant the bike was available, although the price was not quite painless.

The 600cc model was a  re-introduction to New Hudson's 1929 range, doubtless to appeal to the sidecar-hauling market. It joined the 250, 350 and 500 sidevalve models in that year's catalogue.

Recommissioning required a little effort, but the bike was in basically sound condition. New Hudson survivors are rare and it seems Ferret's may well be the only running example. The bike also represents an unusual freedom to its owner. Rather than the complex wiring systems that he is frequently called upon to deal with, the New Hudson has just one wire!