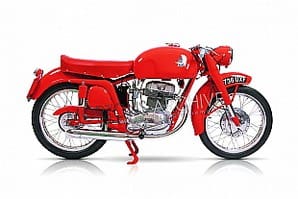 After WWII, a world championship was established for motorcycle racing, with the first season coming in 1949. Almost from the off – 1950 in fact – the name MV Agusta was represented, which was to remain the case for the next 25-plus years. During that quarter of a century, MV Agusta was incredibly successful, with their fire engine red racers to the fore in many categories. With the domineering personality of Count Agusta at the helm, MV – albeit for long periods without much opposition – kept winning and winning, the success of the racers elevating the company’s more affordable products in the eyes’ of enthusiasts.

Of course, it is the dominant days of the 500 and 350cc four (and threes) in the late 50s, 60s and early 70s which enthusiasts remember most clearly today, but it was in the small capacity classes that the maker from Gallarate initially became a force to be reckoned with, scooping their first world title in 1952, the 125cc crown thanks to Englishman Cecil Sandford. 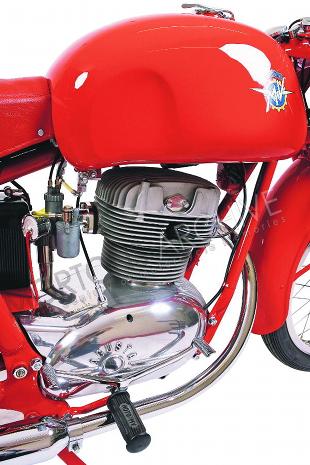 Not only did MV produce spectacular lower-capacity class racers, they also made bright and memorable small capacity roadsters, some bearing no similarity to the racers, other than the tank badge – while others were a bit more closely related to their racing brethren than that. None were much more race-bred and spectacular than the Modello CS Sport, an example of which this machine is.

Owned by Stroud-based retired engineer Ron Crumpler, the MV was acquired in 1995. Details of its restoration appear in the April 2006 issue of The Classic MotorCycle but suffice to say, it was in poor shape when acquired.

Seventy-two-year-old Ron – who passed his motorcycle test aged 16 – enjoyed an MV as a youngster and it was those memories, plus recall of Tommy Robb’s racing exploits riding for the marque, which made Ron want another. The restoration, which began in earnest in 1997, took eight years of hard graft, though the finished jewel-like machine is a testament to Ron’s skill and patience. Ron – who daren’t put a price on what the restoration cost in monetary or personal labour terms – advises that anyone undertaking a similar task should prepare for often exhaustive searches for cycle parts, but praises the MV Owners’ Club – of which he is a member – for advice and spares back-up.