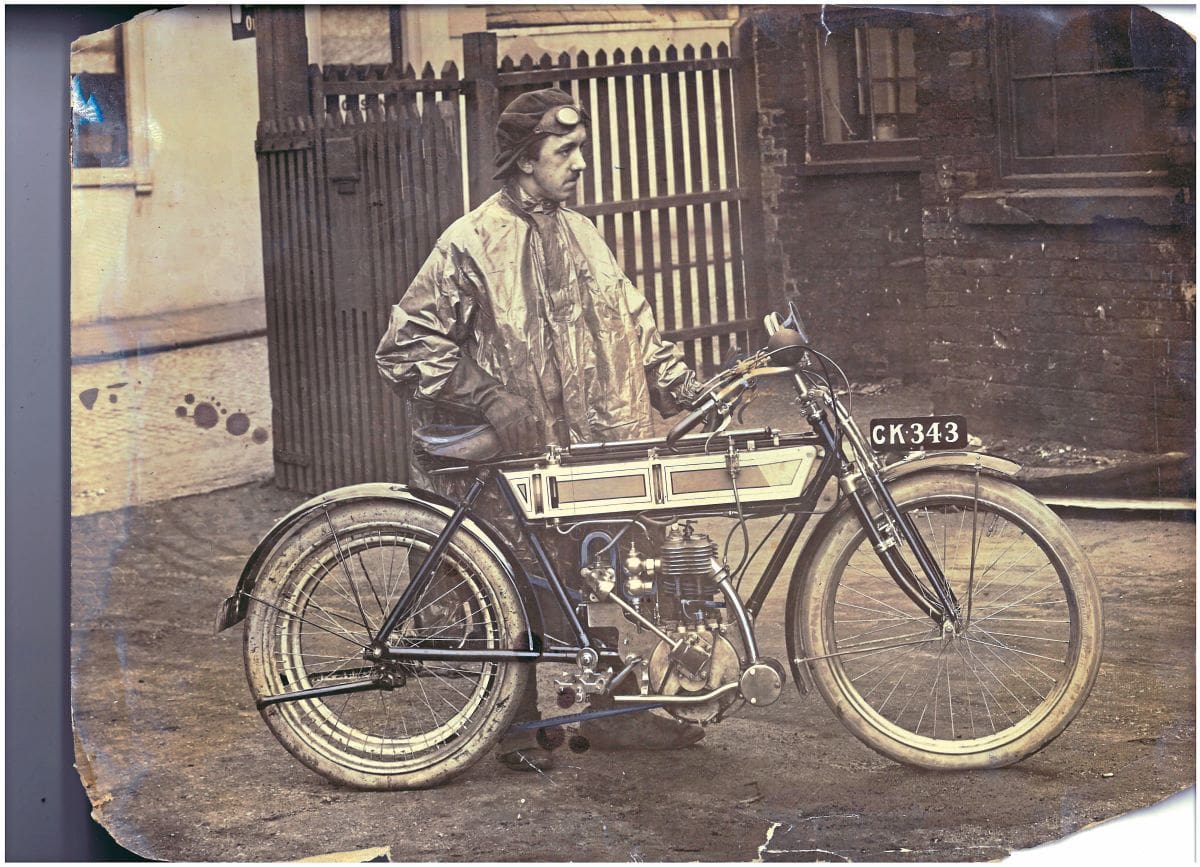 Preparing for the 1910 TT, fascinating pioneer motorcyclist Bert Houlding, with his JAP-powered racer.

On the reverse of this photograph, there’s some brief notes, added at different times, as evidenced by the varying writing implements used and the handwriting styles. The first, beautiful flowing writing, in pencil, describes; “JAP Loxham machine, rider Herbert Houlding, photo by J H Jamison, Preston” while various other styles of writing have added more, including – in Biro – when and where it was published (The Motor Cycle, May 26, 1910) and “1910 Moveo-JAP, with shaft-driven Bosch magneto, makers: Loxham Garages, Preston.”

If anyone has seen a copy of enthusiast Paul Ingham’s book ‘Bert Houlding: TT Pioneer’ then they will be familiar with Houlding’s story, though not the picture, as it doesn’t appear in there. Paul still has some copies of his 2012 published work available, to which the following information is indebted; to buy a copy email Paul at paulingham06@btinternet.com

The subtitle to Paul’s book is ‘Motorcycle manufacturer: made in Preston’ (from where Paul also hails) and that’s exactly what Bert Houlding was to become, most notably with the Matador and Toreador concerns – but the Moveo was his first attempt.

Born in Preston in 1888, by his early teens he was already employed in the motor trade – and already motorcycling. He was employed for a time as a chauffeur and also by Loxham’s Garages and, after a trip to the inaugural TT in 1907, he persuaded his bosses to allow him to build three motorcycles for a ‘crack’ at the TT. These were the Moveo (Latin for ‘I move’) as pictured.

There is an account, recorded by Bert, of his preparations: “Three bikes were built for the 1910 races. These comprised two 85x85mm side-valve JAP engine models, and one V-twin with a 76×73¼mm JAP which was really the then popular side-valve engine with the stroke cut down.

“Building these machines single-handed, in a shop where motorcycles were of a very secondary importance, gave me a full-time job. There were several innovations including bevel driven magneto with micrometer timing adjustments, unit construction, i.e. the power unit complete could be removed in a very short time. However, the rest of the specification was not as alluring, as it comprised a fairly high frame and long wheelbase, rigid forks, very small section tyres, and a saddle similar in every respect to the push bike type.”

How the Moveo crew did in the race, and even who rode, is largely impossible to discern – Motor Cycling lists Houlding as on number 42 which is the V-twin Moveo, while The Motor Cycle’s finishing order/list of retirements has the number 42 as J H R Laxham (which should surely be Loxham) but perhaps Houlding swapped bikes late on and took over the V-twin, as the one in our picture (with the number plate visible) is elsewhere pictured with the number 41 plate attached, and 41 doesn’t appear in the list of starters published in Motor Cycling.

There is mention made of Houlding starting and The Motor Cycle has Laxham (sic) stopping at Ballacraine, which is where Houlding says, in his own account, he crashed. It’s all a bit of a mystery, further deepened by the starting list in which Storey appears as the man on the 3½hp Moveo number 53, but The Motor Cycle’s post-race detail has number 53 Moveo as D B Rea, who retired on the first lap with a broken pulley. Whatever, it’s fair to say the Moveos didn’t trouble the leaders, in a race won by Charlie Collier from his brother Harry, both on their own-made 5hp (660cc) Matchless V-twins, with a pair of Triumph 3½hp singles third and fourth; one of the peculiarities of the time was that multi cylinder machines enjoyed a capacity advantage.

Moveo listed a five model range for 1911, though whether any were actually built is open to conjecture. Bert Houlding was to go to many more adventures, with all manner of designs and collaborations, his most noteworthy probably being with Granville Bradshaw. Not only did Bradshaw supply Houlding engines for the Matador and Toreador (formed by Houlding with Chris Shorrocks, later of supercharger fame, after Houlding left Matador, a company he’d founded) but Houlding, Bradshaw and G H Jones (later designer of the ‘Lighthouse’ OK supreme) collaborated on an ohc oil-cooled engine in 1926. We – and Paul Ingham in particular, on the email given – would love to know if the engine still exists; it was reckoned to have been raced on the sand, at Southport, by Norman Houlding, Bert’s brother.