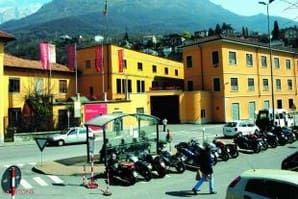 Moto Guzzi has a long and proud history, a past which is celebrated in the factory’s own museum, at their Mandello del Lario base. Included within the museum’s walls, is a metallic rendition of the concern’s history, charting their ups-and-downs with the models they have produced over the years. It’s a remarkable collection, and as close to Guzzi-enthusiast nirvana as anything on earth. Though it’s not completely definitive, it’s probably the nearest thing to a comprehensive collection representing the history of Moto Guzzi there'll ever be.

The collection is arranged chronologically, and single-cylinder machines dominate the early part of the museum, just as they did the early years of Guzzi production. Outside flywheels abound, as would be expected, and flat singles are prominent. There are examples of the green-finished Normale versions – Moto Guzzi’s first production motorcycle – plus various, red-painted sportsters from the early years. 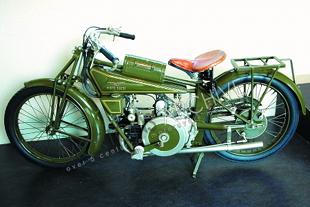 Moto Guzzi was founded in 1919, with Carlo Guzzi its driving force, and Giorgio Parodi his associate. The plan had actually been hatched during WWI when Guzzi and Parodi had been in the fledgling Italian Air Force. They, together with a third man, Giovanni Ravelli, formulated a plan – Guzzi was to be designer and chief engineer; Parodi (from a wealthy family) to provide the finance; and Ravelli, a pre-WWI racer of some repute, would be the rider and garner publicity. Sadly, disaster struck when Ravelli was killed in a flying accident, perversely a few days after the war had ended. The other two men, though, pressed on, and the world-famous spread eagle Moto Guzzi logo, taken from the Italian Air Force’s insignia, was chosen in memory of their fallen comrade.

The new model went on sale, and soon after Moto Guzzi decided to go racing. It was to be in the competition arena that Moto Guzzi was to flourish. Sporting models in the museum are obviously to the fore, and there is a well-used-looking example of Guzzi’s first 500cc racer, the four-valve flat single, which was important in that it was the first Italian-built machine to tackle the 500cc class. 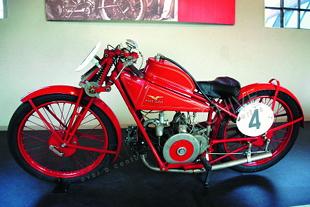 But it was the 250cc category in which Moto Guzzi first came to international prominence, specifically with Pietro Ghersi’s stirring performance in the 1926 Isle of Man Lightweight TT. Ghersi, in no way familiar with the Island’s challenging course, impressed all with a fine ride to second place behind acknowledged Island ace Paddy Johnston, setting fastest lap in the process. However, his – and Moto Guzzi’s – joy was short lived, when Ghersi was disqualified for having fitted a different-to-specified make of sparking plug. Bizarrely, though, his fastest lap was allowed to stand and is still recorded in the race records. A particularly pretty, and very nicely presented, 250cc racer in the museum is a fitting tribute to Ghersi’s efforts.

European 250cc races
Moto Guzzi were on the brink of what was to be their first ‘golden era’ – the 1930s. Soon, the 250 was regarded as virtually unbeatable in most of the mainland European 250cc races, while Moto Guzzi were keen to embark upon an assault on the bigger classes. A 250 with a difference on display is the supercharged single-cylinder record-breaker, the Compressore. On this machine, basically a TT250 fitted with a Cozette supercharger (which was built by Moto Guzzi) Nello Paganni set seven records at Monza in 1938, including the 50km flying start record, at 180.81km/h. In 1939 the Compressore set more records – including the hour (180.502km/h) and the flying kilometre (213.270km/h). After the war, the machine was modified and pressed into service with a sidecar fitted to set more records in the 350cc class – it’s in this form, though without the sidecar or the streamlining it gained, in which the machine is exhibited. 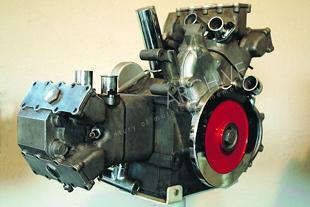 Elsewhere, other highlights include the Condor, the single-cylinder machine designed specifically to win the long-distance road races so popular in Italy during the 1930s. Various other examples of 30s Guzzi-produce are available to be pored over too, showcasing the firm for what it was in the period – innovative and free-thinking.

Nothing represents this more than one of the stars of the museum, the one and only Tre Cilindri racer. Designed by Carlo Guzzi in 1939, the three-cylinder 500cc supercharged racer was designed in direct response to the multi-cylinder racers which were beginning to come to prominence in competition. BMW’s supercharged flat-twin was the standard the others had to live up to; others were offered by the likes of the Italian Rondines and Benellis, plus the British firms Velocette (the supercharged twin-cylinder Roarer) and AJS (with their V-four, watercooled supercharged effort). It was an exciting time in the world of top-level, 500cc racing – but of course, the days of racing being to the forefront of peoples minds were numbered. So, the Tre Cilindri Moto Guzzi never got its chance – it made a sole appearance, at the Albaro circuit near Genoa, in May 1940, ridden by Guglielmo Sandri.

It is a fascinating, and puzzling, machine to study. Though the example in the museum is partially dismantled, enough of it remains to give an impression of its remarkably sophisticated, forward-thinking and innovative design. And it represented such a break from the ‘norm’ for Moto Guzzi – not only was there three cylinders, but there was chain-driven dohc too. And the spine-frame design was truly innovative, with the engine ‘hung’ beneath it, in a style reminiscent of Vincent’s post-WWII set-up. It’s a shame that the three isn’t complete and running – maybe one day. 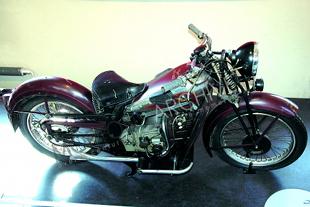 Three cylinder machine
The racing Tre Cilindri isn’t the only unique three cylinder machine in the collection, however. There is an equally unusual, and totally different – though designed by the same man – road going three dating from the early part of the decade. Though Guzzi had flirted with – and in fact designed and built – a four-cylinder racer previously, it was a triple-layout they envisaged for their road going multi. Very much in the mould of its contemporaries, the Ariel Square Four and the Matchless Silver Hawk V-four, it appears to have been intended to be a true Grand Tourer (GT) rather than a sportster. The three cylinders are arranged in an in-line configuration, but laid almost flat, thus in keeping with Guzzi’s then current production machines. The engine casings are very ‘square’ in shape, with an ohv set-up preferred. The frame is a standard cradle-type, with much in common with the production Guzzis of the day.

Apparently unrestored, the road-going Tre Cilindri doesn’t look like it would require too much fettling – especially to its cycle parts – before it could be sampled again. One imagines it would be a wonderfully lazy, torquey engine, with no pretence – or intension – of sportiness.

Though the 30s was a golden era for Moto Guzzi’s innovative, creative designs, the 1950s didn’t lag far behind in terms of being at the forefront of racing technology. But before that period, Guzzi had a brief spell – immediately post-WWII – when various twin cylinder machines were at the forefront of their racing ideas. The Bicilindrica in-line V-twin was still very much in the company’s thoughts, and is well represented in the museum, with an immediate post-war girder forked example – similar to the one raced to Isle of Man TT victory in the 1935 Senior by Stanley Woods – plus one of the later, alloy half-faired examples on display, which though both gems, are not as unusual as the 250cc Due Cilindri. This 250cc parallel twin bears at least a passing resemblance to the immediate pre-WWII racing triple, with its underslung engine. Apparently, it was tested extensively, but the results were disappointing, and it was deemed wiser to continue with the tried-and-tested single cylinder format. The example in the museum, though it looks complete, does seem to have been inactive for some time. 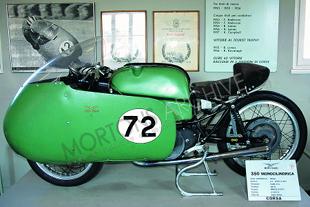 Road and racing platforms
Though it was the single-cylinder models which were forming both the basis of the company’s road and racing platforms, there was still occasional design ‘flights of fancy.’ One such machine was the in-line four cylinder racer, shaft-drive Quattro Cilindri racer. Obviously, this was the second four-cylinder racer from Guzzi – and it was very different to their first effort of over 20 years previously. It was also, engine-wise, radically different to the immediately pre-WWII 500cc triple – and in truth, it was pretty different to anything anyone else had ever done. The engine hangs though from the frame in echoes of the earlier triple – but the in-line four cylinder engine could hardly be more different to either the triple or the previous four, owing more to car design than previous motorcycle practice. Interestingly, this machine sprang from the drawing board of a newly-employed designer, Carlo Gianini, who had been employed because he wasn’t steeped in Moto Guzzi tradition and so was able to think ‘outside the box.’ The one in the museum has the bare-metal, beautifully beaten aluminium petrol tank/fairing unit, devoid of paint of course.

Another legendary machine from the same decade on display, is an example of the famous V-eight. There are barely enough superlatives to describe this fantastic piece of engineering – and on the day of my visit, a V-eight was being used as a table decoration on the buffet tables in the museum foyer, where a fine spread had been laid on to feed the visiting journalists! Not only was there a V-eight, but also an engine too…just what you want to be able to study when you’re enjoyed your pasta!

Joining it as table displays were a fully faired record breaker, and an example of the machine which is now what Guzzi are so well known for – an across the frame V-twin, though this was one of the 1969 V7-derived machines which set a number of records for the factory in 1969. 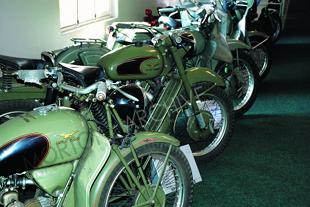 And that’s the thing with the Moto Guzzi Museum – so many of the machine’s have been retained because of their true provenance, that it is impossible to record the details of each and every one of the special exhibits, let alone the examples of all the ‘ordinary’ Moto Guzzis.

From the 1950s-on, there are examples of practically every road going, police, military or off-road model, through from 50cc machines right up to the latest V-twin superbikes. There are the across the frame fours from the 70s, which are indistinguishable from Benellis of the same period, there are scooter prototypes, and there are machines as supplied to the American Police.

Basically, the Moto Guzzi Museum is a special place to visit, not least because it is on the site where the machines contained within were originally built, but also because of the sheer volume of machinery on display there. And, though they’re not all in gleaming and glistening condition, the very fact that they’re still there, is testament to the ethos which runs through the company. Moto Guzzi is clearly a company proud of its rich history – and with the on-site museum, they have the facility to demonstrate exactly what, and why, they’re proud.