Dave Hunter's Lodola (all the vowels pronounced short) is a 235cc four-stroke with that unmis­takable Italian look Not hard to find, they can be bought at very reasonable cost — less than £1000. A concours example would obviously fetch more.

Dave loves the lived in 1960 GT (Gran Turismo) pictured here. He bought his in 1995 from a private owner in London.

The Lodola, made from 1956 to 1966 initial­ly as an overhead cam 175, is physically a small machine. This is one reason its owner loves it. Not as young and fit as he used to be, Dave finds the Lark easy to handle and ride.

Eyeing over the little red Lark, I was wary of the left side kickstart because of an operation on my left ankle. But I found that the 45-degree inclined engine came alive so readily it gave me the confidence to kick without the need to dismount to use my right leg. 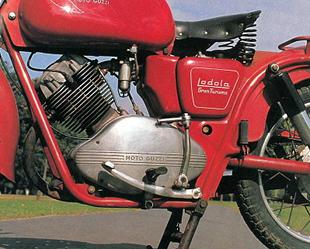 General riding
The 11bhp (measured at the rear wheel by Moto Guzzi, says Dave) has no great turn of speed, but you wouldn't call it a Plodola, though for general riding you have to work it hard to get to an estimated 55-60mph. I say estimated because the speedometer was not working. Down a long hill my guess is it might top 70mph. Flywheel effect is such that it takes a while to build up speed but once there the engine holds its revs quite well and will pull from low revs in top (fourth) gear.

So you can either ride in spirited manner and use the revs which the motor is happy to provide, or take the easier route and let top gear do all the work.

You may not believe this from looking at the Lark, but it has a large outside flywheel. You can't see it because the flywheel is hidden under the nearside engine cover. The cover also hides the belt drive to the Marelli six volt dynamo which is damped in a tunnel at the front of the crankcase. Under the offside cover you find the external kickstart quadrant and gear linkage.

Understressed Italian
As you would expect with a lightweight understressed Italian, it turns into a corner predictably and securely giving you great confi­dence. You soon find yourself charmed by the Lodola which appears to lack all sign of latin temperament.

Frugal and with a 3.5 gal tank, the Lark offers good fuel range but it doesn't take long for you to realise the sprung saddle could be hard to take on a long run. Thankfully the neat riding position — a slight forward lean and well placed footrests — spread your weight to give decent riding comfort. At first I found my right foot fouled by the heel and toe gearchange pedal because I like to ride with the balls of my feet on the pegs. But after a couple of miles I found a comfortable com­promise. 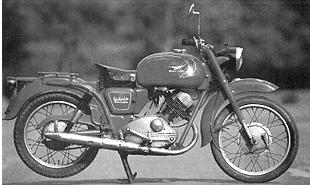 There's a long hand stretch to the front brake lever which operates a drum, a unit sur­prisingly resistant to fade and well up to slow­ing the machine's performance. Dave argues that it lacks bite and may benefit from modern linings. The rear drum will lock the wheel.

The gearchange was fine until the engine became hot. I found that repeated turning in the road for the photo session resulted in first not engaging cleanly all the time.

Also the throttle cable was pulling on right lock making the engine rev — an annoyance I thought might eventually result in clutch slip. Thankfully the multiplate dutch was well up to the job.

The dry sump engine is fed from the near­side mounted four pint oil tank which sensibly has a car style cartridge oil filter.

Dave explained that the forks are upside down type containing springs and rubber bungs but no hydraulic damping. Note the external rubber washers at the bottoms of the sliders, presumably to catch grease drips. 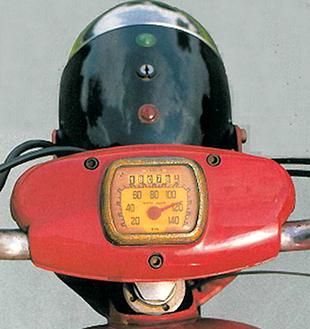 Some Lodolas have dualseats, others the single seat with rear rack you see here. Under the seat on the 235 you will find a washable gauze air filter in a large airbox feeding the 22mm Dellorto carburettor.

How does the owner see his Italian friend?

"A really sweet, tolerant little bike that doesn't mind hard work Everybody who has ridden it has felt at home immediately. I've had two summers with it now plus a few winter rides — no problems.

"It's too original to bother restoring, even if it is a bit tatty. Besides, I did a quick restora­tion on my identical model last winter. I found Ian Ledger (Stream Cottage Classics 01460 53145) very helpful with parts, information and advice."

We called Ian for a chat about values and survivors in this country. No-one knows how many were imported or how many remain in the UK. So the best we can do is give you an educated guess. The Lodola was imported by Pride and Clarke who set up Motor Imports Co Ltd, in Stockwell Road, London SW9. In Ireland the model was imported by former Guzzi factory works rider, the late Stanley Woods, whose remaining stock was bought by Ian who thinks only about 40 examples of both 175 and 235 models were imported. Today he knows of 25-30 Lodolas running condition or being restored in this country.

Chris Ranieri who deals in affordable Italians says he has sold 20 Lodolas in the past four years and estimates there could be more than 100 in this country.

The 235 outnumbers the 175, and the very first of the 175s is the most collectable. Examples are currently being imported from Italy both by specialist dealers and by individ­uals, so the numbers here will improve assuming imports beat exports.

The Lodola has until recently not been high­ly regarded in its homeland, says Ian. He has heard of examples being thrown in the river. But in recent years the Lodola is being per­ceived with an eye to its significance as the last of the Carlo Guzzi designed machines. Fancy one? Ian says spares back-up is excellent and is regularly replenished from Italy. Only tinware may be a problem. 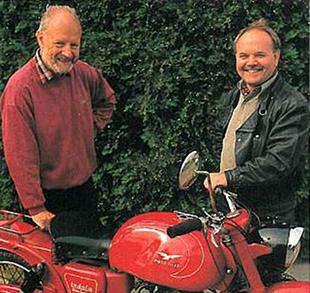 Chris Ranieri reports that Continental traders and clubs have been buying machinery by the truckload from Italy. As a consequence the Italian trade is putting prices up. Because of this he has not bought fresh stock in recently. Ian Ledger concurs that this has been the case for the past two years.

So if you recently spotted a Lodola for sale at reasonable cost perhaps now is the time to go for it. A Lark in the hand is obviously worth two in the bush.

Owner: Dave Hunter
Dave, 62, rode throughout the Fifties starting on a 1936 250 sidevalve Royal Enfield. He missed the Sixties because of family life, resumed motorcycling and started collecting in the Seventies. Over the years he has owned nine Sunbeams. Today, as well as his two Moto Guzzi Lodolas his collection includes a 1969 Benelli 250SS, 1926/27 Swallow sidecar, various Sunbeams, a trials NS, two-stroke Bianchi, and a 1913 Douglas that won Best Veteran award at Hooton Park in September.