“Catt returned to Northampton for a hero’s welcome, having ridden 2557 miles in six days.”

There has been a long history of tough, hardy souls chasing long distance motorcycle records, both in the UK and all around the world, but Albert Catt, from Northampton, was arguably the grandaddy of them all – and the toughest to boot. 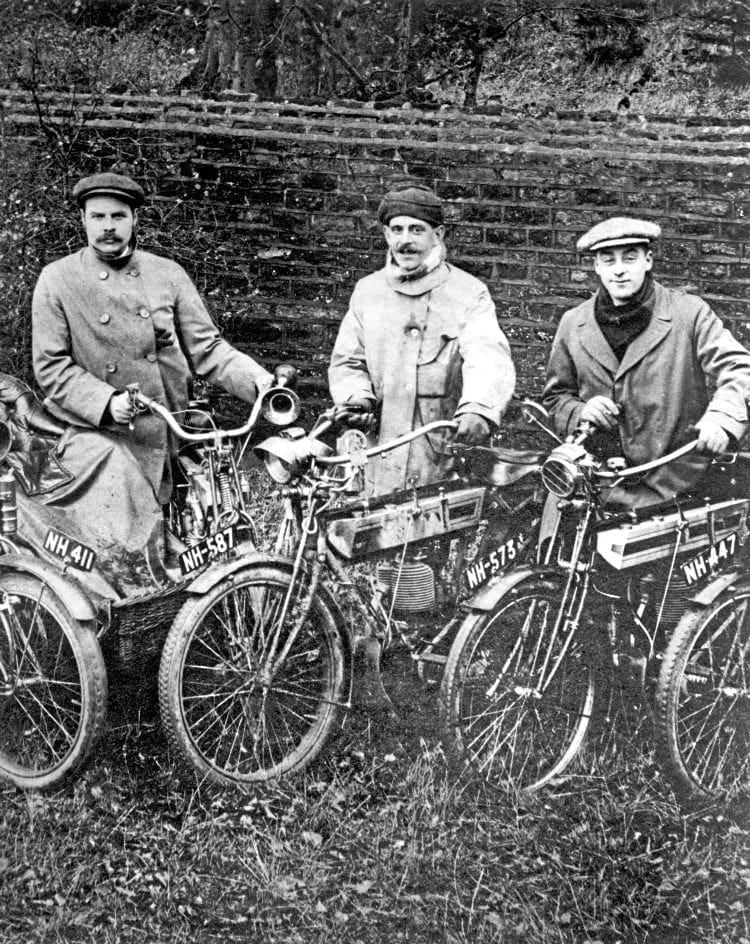 The boot reference is especially suitable as that was the trade Albert (pictured right, middle) was in. He was, like the majority of Northampton citizens, a businessman involved in the leather trade, and a partner in the shoe making firm, W Barratt and Co, one of the country’s bigger shoemakers by the 1920s. It’s no coincidence Northampton football team’s nickname is the Cobblers!

Albert didn’t restrict himself to narrow business interests – apparently, he was also involved in leather-trading, mail-order shoes and penny-in-the-slot gaming machines too. Supposedly, Catt was the man who came up with the device that detected counterfeit coins and washers being fed into said machines – so a man of many talents.

But it was his motorcycling talent – or more accurately, his remarkable resilience and stamina in the saddle of a motorcycle, which was arguably his greatest talent of all.

Born in 1876, in Tenterden, Kent, Albert Edward Catt acquired his first motorcycle, a Swiss-French 2¾hp Zedel, in 1904. By then, Albert was married to Alice, and had two children – Albert born in 1901 and Alice, born the year after. Soon, the underpowered Zedel was replaced by a 5hp Antoine, a Belgian-made V-twin, but that suffered from overheating. Catt took the advice of a local clergyman, the Rev Basil H Davis, better known as Ixion, and bought a Triumph.

Through his now-friend Ixion he also became involved in long-distance motorcycling, with the two men also forming the Northampton Motor Cyclists’ Club together in 1905, which, incidentally, is still going.