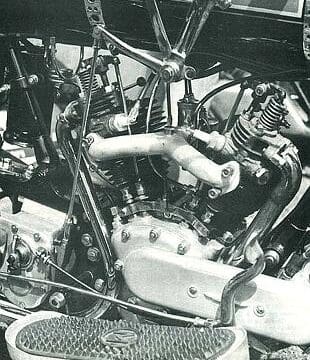 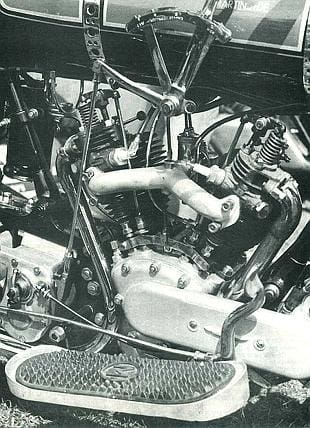 "When I bought this motor cycle two or three years ago it was an absolute wreck", says Ken Blake. "The previous owner had had it for 17 years, but I don't know what he did with it."

Whatever he did do with it, Ken faced an enormous task in bringing it back to life. He made the handlebars, exhaust pipes, valves, big-ends and toolboxes; he cast the inlet tract, borrowing one for a pattern, primary chaincase and footboards.

He also had to shorten the bottom links of the girder forks, as this Martinsyde left the factory as a Model B sidecar machine. How can you tell? It has a longer wheelbase, and the gap between the rear cylinder and the saddle tube is at least three inches; on the solo model there is barely enough room to spit through. With the modified forks the machine handles well, though before the links were shortened the steering was a little peculiar.

Something else which Ken has changed is the front brake. It should be a block operating on a dummy rim (the typical veteran brake) but for practical reasons (i.e. Ken Blake wishes to be able to stop) a later internal-expanding drum has been fitted. "How on earth they stopped with a sidecar," says Ken, "I just can't imagine."

Help with the restoration came from Chris Tait, the well-known Martinsyde enthusiast (though not the VMCC Marque Expert ­that's Alex Brett), who confirmed that it was a 1922 model. That year was perhaps the optimal year of production for Martinsyde, for it took the factory some time to get going, and in the following year a disastrous fire occurred.

Helmuth Paul Martin and George Harris Handasyde, founders of the firm, were not motor cycle manufacturers by choice. They had begun by making aeroplanes, and soon acquired a reputation for excellence in this field. During the Great War they developed and made fighter and bomber planes in some numbers, but the workforce required for this effort became more or less redundant as soon as the Armistice was signed.

Looking around for new areas to explore, Martinsyde took a leaf out of Tommy Sopwith's book and turned to motor cycles, using an engine design brought to the firm by Howard Newman, whose family was con­nected with the Ivy concern. This turned out to be the unique exhaust-over-inlet motor, and although Newman soon disappeared, the engine stayed.

Sadly, Martinsyde disappeared fairly shortly too. Neither of the founders was a businessman, and despite the launching of a supersports "flagship" in 1922 — the Quicksix — that fire in the factory caused enough damage to leave the firm unable to pay for repairs, but insufficient to allow an insurance claim. Caught in this dilemma, an Official Receiver was brought in, but it did not work out and the factory closed its doors in 1923.

It was not quite the end, though, for Bat, itself not in the best of health, bought both the name and whatever engines and components were left. A number of Martinsydes were made and sold by Bat before it too went to the wall. In its short life, however, the Martinsyde had acquired a reputation for superb engineering, and a dedicated band ­the Martinsyde Register— keep the name and the machines alive.

Chris Tait was able to supply paint in the correct shade of Martinsyde blue, and Ken found an appropriate spares book for ref­erence. The book had the Bat imprint and address on it, dating it to post-1923.

And how does it go, after all that effort? Very nicely, to judge by the way Ken was batting around the Isle of Man during TT week…