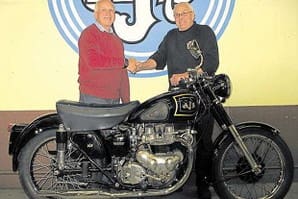 Held in the ground floor of one of the racecourse grandstands, the show had a wide variety of machinery, ranging from a rare Wassell 175cc trials bike to the Landspeed racing 600cc Indian Scout of Chris Ireland and the increasing interest in American flat-track racing was evident by a stand packed with colourful examples of the genre. For many, Kempton was also a first opportunity to see the reborn Brough Superior.

At 2pm, some of the exhibiting bikes were wheeled out and fired up. An hour later, the organising team was busy distributing the rosettes to the award winners.

Best in Show went to the owner (who did not wish to be identified) of the AJS 7R scrambles bike once raced by Brian Leask. Developed for long-distance events, the bike was considerably modified, including a capacity hike to 500cc. Although quick, the bike suffered such bad vibration that the rider would lose the skin from his hands on races such as the Pirbright 100-mile. The winners were presented with their awards by the man behind the legendary Dresda name, Dave Degens.