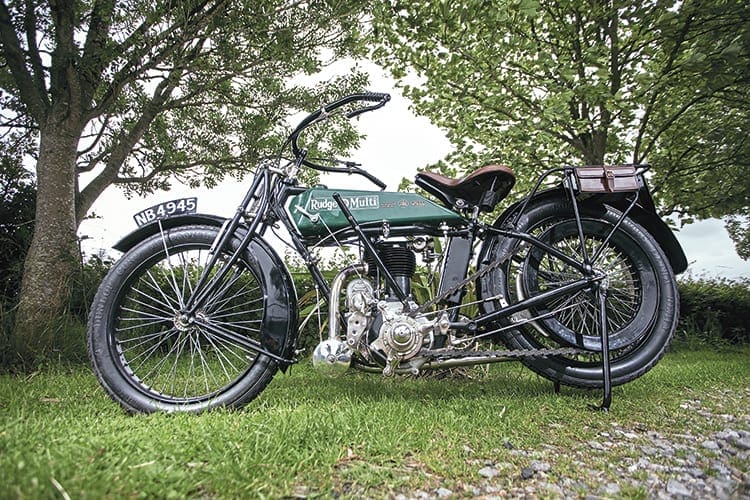 By the early 1920s, when this example was made, the Rudge Multi was something of an anachronism, rather than the trendsetter it had been.

Every era has its iconic, defining, motorcycle – its Fireblade, Bonneville, Brough Superior or whatever – and for a few years around the First World War that accolade arguably belonged to the Rudge Multi. Its reputation was inextricably tied up with the contemporary popularity of belt drive; something modern enthusiasts might find hard to comprehend. After all, even in the early 20th century chain drive and gearboxes were well understood by pedal cyclists and motorists.

When it came to motorcycling though, belt drive still had several plus points including greater familiarity – just look at those photographs of factories with rows of machines belt-driven from an overhead shaft – and the ease with which it could be repaired at the roadside. Additionally, belts and pulleys were cheap to make and maintain, and perhaps most importantly, belts’ inherent flexibility and shock absorbing properties provided a much more pleasant riding experience. Veteran and vintage enthusiasts aren’t just spinning a line when they eulogise the pleasure of trundling along without any noise, vibration or jolting from the final drive.

On the down side, the big drawback of belt drive was normally providing just one drive ratio. And if that was the one suitable for cruising on the flat it was obviously fairly useless for accelerating fiercely or tackling inclines. Really keen motorcyclists tackled the problem by changing pulleys at the bottom of hills, but that also meant changing belt lengths and wasn’t very practical for everyday riders. Salvation arrived in 1908 with Zenith’s famous Gradua gear where the two sides of the front pulley could be given greater separation or brought closer together, which caused the belt to ride lower or higher in the groove to vary the drive ratios. Naturally this altered the belt tension; a problem Zenith countered with a complicated system that simultaneously moved the rear wheel backwards or forwards. It was so successful Zenith was barred from some competitions which, ironically, gave them much useful publicity and enhanced sales.

Other manufacturers found it difficult to match Zenith’s success, but four years later Rudge (who’d only started making motorcycles a year or so before) introduced their own system of variable belt drive rather misleadingly called the Multi Gear. Again it featured a front pulley whose halves could be moved relative to each other, but now the belt tension was maintained by simultaneously moving the sides of the rear pulley in the opposite direction. This neatly sidestepped any patents held by Zenith, and also marginally enhanced the range of drive ratios for a given change in the front pulley’s diameter. The method by which the rear pulley movement was achieved would take too many words to fully explain, but in essence its inner half was permanently attached to the conventionally spoked wheel, while its outer half was separately spoked to a drum which could slide sideways on the main hub. The result was a forest of spokes and considerable additional complications such as a conventional v-section rim brake not being viable, so the brake block had to operate less effectively on a flat section of the inner rim. 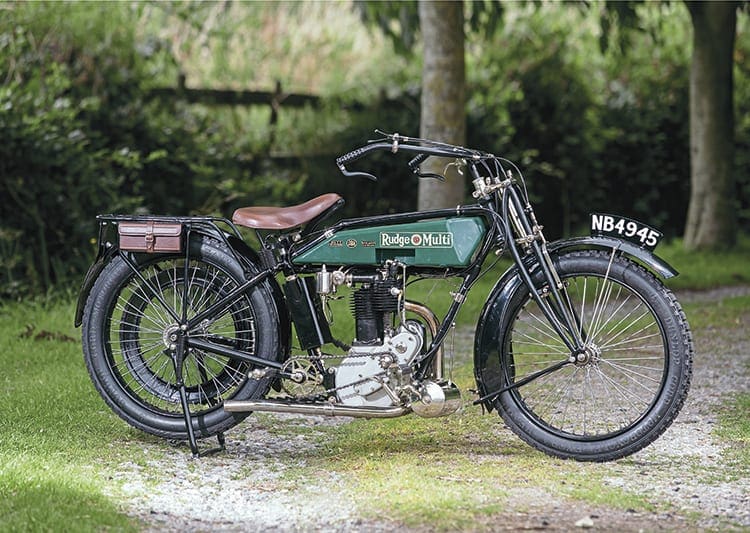