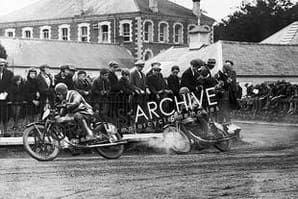 Third Norton teamster, Joe Craig, made fastest time of the day in winning the 600cc class and coming in first ‘on the road’. But under the handicapping system used to determine the premier award winner, Shaw’s 2h 53m 25s, as opposed to Craig’s 2h 50m 44s, was enough to secure Belfast rider Shaw the original Ulster GP trophy from his fellow Irishman Craig.

Race morning had dawned wet and windy and of the 95 entrants, 86 came to the line. Interesting machines, noted by Motor Cycling’s man, included ‘…a number of Scott Flying Squirrels, Patton’s twin James, Marston’s HM Special with its 8.45hp JAP engine and Harley-Davidson forks and the 500cc AJSs ridden by Wade and McCurdy.’

First man away at midday, and under the gaze of prime minister Sir James Craig, was rider-constructor Jock Porter, on one of his self-built New Gerrards, this a 250cc version. Porter led a field of 12 250cc-class riders. Other competitors followed at 10 second intervals with most making clean getaways though evidently Wal Handley – riding a 350cc Rex-Acme as usual, but one unfamiliar to him, being borrowed owing to his usual machines remaining on the continent – needed a longish run before his OHV Blackburne engine chimed into life, to universal cheers. Soon, Wal was flying, rapidly passing 20 riders but his form was short lived and he was forced to retire, one of 12 casualties on the first lap. Chambers (AJS) was emerging as the fastest of the 350cc class runners, with Gordon Burney (Royal Enfield) and Paddy Johnston (Cotton) there or thereabouts.

In the 600cc it had quickly become obvious that the ohv 490cc Nortons were the class of the field, the extra capacity fuel tanks fitted – which can be seen in our picture – hindering neither handling nor top speed. The only man able to get anywhere near the charging trio was Jimmy Simpson on the 498cc AJS – who strangely didn’t warrant a mention in the Motor Cycling man’s pre-race ‘interesting entries’ piece but surely would’ve been on a sister machine to Wade and McCurdy? – but Jimmy’s run was short-lived, the Ajay seizing up on the energy-sapping five-mile uphill straight before two laps were out.

In the 1000cc class, though New Imperial could rely upon the talents of the emerging Stanley Woods on a big V-twin, none of the litre-class competitors could keep pace with the ‘Bracebridge Three’ with Stanley making the best fist of it, with McCrae (Brough Superior) and Marston (HM Special) also striving to stay in touch.

During the first five laps there had been five retirements in the 250cc class, 15 in the 350cc category, 18 in the 600cc section and three of the big bangers had dropped out, but the attrition rate was about to go up rapidly. In the 250cc class leader Syd Crabtree (New Imperial) and quick man Porter had both stopped, leaving Billy Colgan (Cotton) relatively unopposed. In the 350s, Chambers still led Burney, but Paddy Johnstone had gone too. The 600cc race saw the Norton three utterly in control, while Woods was even more alone having ‘no other company than his own shadow.’

As the race drew to its conclusion, it became apparent that the outright victory would come down to a fight between the three Norton men – but Craig of course, was also battling the handicapper, probably by dint of his victory in the 1924 event.

It was a close run thing towards the end and it looked like Alec Bennett – a WWI pilot in the RFC the last man to win a TT on a side-valve, a Sunbeam in 1922 and the 1924 Senior TT winner for Norton, who was to go on to famous TT wins for Velocette (1926 Junior; so confident was Bennett of winning he rode on a ‘no win, no fee’ basis) and as the first ‘cammy’ Norton rider to a TT (1927 Senior) – was odds on for the victory as he’d put himself a minute and a half ahead of Craig, a fellow who himself was to go on to a reasonably successful career…

But as the crowd waited to see who’d come through first it was Craig, all alone. However, Bennett still had a two and a half minute margin but he didn’t make it; indeed, it was Shaw who came in to take second place overall but with the handicap taken into account, the overall win. Bennett was third, riding on the rim after his rear tyre punctured; cruel luck after nearly three hours of racing, while fourth on the road was the impressive Burney on the 350cc Royal Enfield, Chambers having dropped out, with Woods fifth and de Gourley – on a Montgomery – sixth.

To view other period images, please visit Mortons Archive, or speak to our archivist Jane Skayman on 01507 529423 with your requirements. Email enquiries@mortonsarchive.com