Standing alongside his immaculately restored Indian Scout, Ken Burian looks ust like any other proud owner at contours meetings. However, this motorcycle is not just something he acquired to restore in retirement, but a machine he had a hand in creating. Not only that, but the immaculate side-valve V-twin is even more special than it appears at first glance.

Ken's1947 648cc Indian Scout is number 40 of only 50 built and was produced to help restore Indian's flagging sales after WWII. The model became known as the Daytona Scout, because it won the prestigious Daytona 200 mile beach race in 1948. The machine was ridden that year by Floyde Emde, whose son Don has also won the race. They are the only such father and son pairing to complete this impressive double. However, we need to go back a year, to 1947, to find out how these machines came into being. Indian's General Policy Committee decided to investigate the possibility of producing 50, 45cu in specials for competition purposes, as their existing machinery was not competitive and they were losing out to Harley-Davidson in terms of sales. These specials needed to be capable of standing up to the rigours of competition or the effect on sales would be negative. To do nothing would be admitting defeat, while the refurbishment of older models was out of the question — they would need to start from scratch. 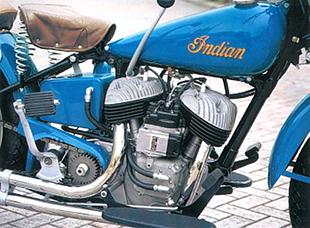 Cost was obviously a factor and from the records it would appear that the design for the Daytona Scout had been on the drawing board for a good few years prior to the decision to actually manufacture it Of the 500 parts needed to produce the machine, only 10 were not stock items and of the other 490, 420 were already in stock with the majority of the others on back order.

Two men were to be assigned to build the machines at a rate of two a week The direct cost would be in the region of $800 — perhaps $1,000 with everything taken into account ­yet the machines were to be sold for just $600. Distribution would have to be restricted to persons able to gain the maximum publicity for Indian to justify the financial loss.

The special Scouts were subsequently built — officially entitled the FDH series ­and numbered 101 to 150. With Emde's win on the initial, outing also setting a new race record (2 hours 22 minutes and 56 seconds, a race average of 84.01mph) it was the start of six fruitful years for the Daytona Scouts before the company finally collapsed. During this period, the machines took race wins and championships galore, easily justifying the investment! Emde's Scout was, in fact, the first of seven Indians to finish in the first 20 on its Daytona debut in 1948!

Current owner
A year earlier, current owner Ken Burian had built the prototype of this model with his colleague, Jack Armstrong. It was this machine, using the big base motor as a starting point, that recorded 50bhp on the factory dyno. However, Ken later tested another motor without the big base crankcases and got an indicated 52bhp, showing there was more to the engine than the famed big base cases! These big base motors were not new though, there were six built prior to the start of WWII, these being given to top factory riders, such as Ed Kretz, Johnny Spiegelhoff and Ted Edwards. The plan was to eventually use these engines in Sport Road Scout machines, but the war put paid to this idea. However, one of the motors powered Spiegelhoffs 1947 Daytona winning machine, prior to it being adopted for the 50 factory specials a year later. 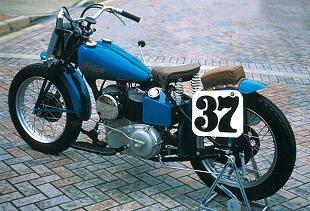 Ken grew up in the shadow of the Indian factory in Springfield, Massachusetts and got to know many of the stars of the time. Once old enough, he too worked at the factory, which is how he came to build the prototype Daytona Scout. He went on to campaign Indians in competition both home and abroad — including rides on one of the specials. Like many other young riders, Ken used and abused his bike in competition, removing the footboards and competing on the dirt and in IT races, before parting company with it He eventually purchased his current machine, which was built toward the end of the production run, from a private seller in Illinois in May 1995.

On stripping the motor Ken found the initials HMW stamped around the engine. This referred to the machinist, William Hess, who did the original machining work on the motor for the factory and confirmed the authenticity of the motor. Later, this was double checked by an ex-employee of the Hess works. Further investigation showed that the factory originally sold the Scout to a dealer in southern Illinois before it was bought by Len Patient, who rode it in competition until 1954. Since then little is known of the machine's history until Ken acquired it in 1995.

Counterweight pattern
Big base motors are different both internally as well as externally. The flywheels are cast steel, but still use the same counterweight pattern as the army models. Rods are polished and pinion and drive bearings originate from Sport Scouts. Cams and tappets, along with the valve train, are late type Bonneville Sport Scout items, although a special valve collar is used. The front camshaft was modified to take the drive for an aluminium oil pump, while pistons are standard Bonneville items, despite some special items being tried originally. 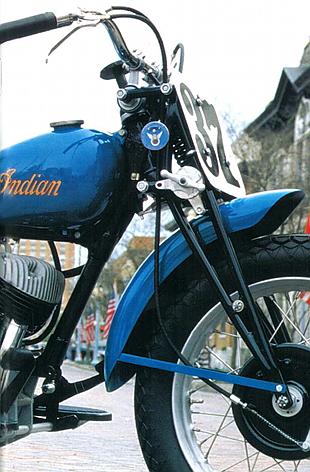 Externally the crankcases have a large sump cast in the rear end and flywheel scrapers cast in the bottom. Extra drillings from the oil pump feed the new oil tank mounted above the rear of the engine and a special cam case cover accommodates the different pump. Cylinder barrel fins are radiused to allow the use of a vertical Edison Splitforf magneto driven off the oil pump. Heads are modified and the inner primary case is filled in where the generator drive opening would normally be.

Numerous alterations
Despite the numerous alterations, most of the parts are modified items from other models. Looking at the gleaming machine, even the external changes are only noticeable on close inspection. Ken's Daytona Scout now wears the full equipment it would have had when it left the factory. Numerous items were removed when the machine was used on the dirt and many of these ancillary parts were easily lost. The oil tank for instance — one of the unique items — was removed and half of the split petrol tank used for oil with the pipes being re-routed upwards to suit Footboards had been replaced with pegs and a previous owner had removed the front brake hub and re-laced the rim onto a new hub.

It is a credit to Ken that he has managed to restore the Daytona Scout to its full works specification. With the help of his son Dave and former Indian racer and employee Jim Sutter, Ken has replaced all the correct parts, including the 10 special items made for the bright blue V-twin in 1948.

Only three other examples of the Daytona Scout are known to exist — one of which is a replica — although some of the special engine parts the factory made are still available. Unfortunately, this also means that Ken's machine is worth a lot of money and he has already turned down some substantial offers from collectors and museums. Bearing this in mind, Ken does not use his Indian in competition, although it is in full working order. When he started it, the sound sent shivers down my spine. It also sent a smile right across Ken's face as he showed that despite advancing years, he had lost none of his skill in opening the throttle and throwing the machine sideways!