The question of originality has proved to be a thorny subject over the years, attracting almost as many letters to The Classic Motorcycle as the ‘What constitutes a classic?’ debate. To my mind, a motorcycle that is ridden regularly may be modified as much as its owner pleases. Whether the result is tasteful or not depends as much on the intended role of the original machine as on any engineering merits.

For example, take the case of machinery built in large quantities for military use. Rugged and reliable it may be, but with limited appeal for practical application in peacetime. Military production during both world wars took precedence over regular factory output. Consequently, many military bikes that were eventually sold cheaply as surplus became ‘civilianised’; that is, repainted and stripped down to more closely resemble the peacetime models on which they were based. 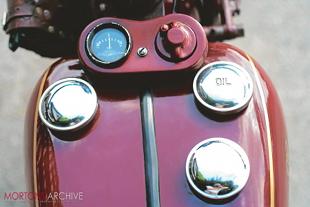 Such has been the case with this Indian 741 military model owned by Paul Preston. This ‘Army Indian’ was part of a batch of 35,000 units manufactured under contract for the US Government between 1941 and 1943. The bike now wears a demob suit of red paint to replace its olive green battle fatigues, although both wheel rims remain black. Its military accessories, including leather panniers, blackout lamps, crash bars, ammunition box and rifle scabbard, have long since been discarded.

The conversion most likely took place shortly after WWII ended, possibly offering a cheap route to civilian motorcycling for a recently discharged service member. With memories of martial life all too vivid, the bike’s new livery would have prompted few regrets about loss of originality.

Miltary model
In fact, the 741 military model was itself something of a hybrid. It used a modified Sport Scout engine, breathing through the lightweight Thirty-fifty’s style of T-shaped inlet manifold via a special oil-bath air cleaner. The Sport Scout’s girder front fork and upper rear frame tubes were extended in the 741 to raise ground clearance for off-road terrain.

The Indian Motocycle Company of Springfield, Massachusetts was one of only two American manufacturers to produce motorcycles for both world wars. Despite having comfortably eclipsed its rival, Harley-Davidson, during WWI, the new military contracts of the late 1930s offered a lifeline to a firm weakened by economic recession, with output down to five per cent of plant capacity. 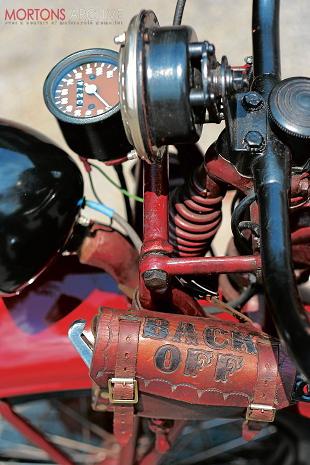 Indian had been experiencing long-term problems with quality control and marketing. Its under-developed four-cylinder machine had proved to be an expensive failure, although its V-twin models continued to attract orders.

Harley-Davidson now rose to be the dominant manufacturer, mainly for its 750cc (45ci) WLA side-valve model, which was preferred by American forces to Indian’s equivalent 640B. The more modest Indian 741 offered a 500cc (31ci) capacity that met the preferred military specifications of the Allies, to which most 741s were exported.

In spite of no appreciable weight advantage over larger models, the 741 became popular for its all-round abilities, proving itself reliable and easy to ride in field duty.

Indian had for some years made its left-hand throttle into a selling point for police work, pointing out that the arrangement made it possible to control the motorcycle at speed while drawing and firing a gun with the right hand.

Wartime contracts included an allocation of machinery for police work. Yet, few of the military models were ever used for the discharge of weapons, being mainly assigned to dispatch and reconnaissance work in theatres of war ranging from RAF fighter stations to the Russian Front. Unsurprisingly, in view of its quirky controls, the Indian tended to be most favoured by those who had never ridden a motorcycle before. Quite a transition would have been necessary for those used to Nortons and BSAs!

Undaunted
Paul Preston bought the bike complete, as a non-runner, in 2003 and was undaunted by its unconventional layout. In fact, he relished the challenge of adapting his own style to the machine.

“At 52, I had begun to get the feeling that it was time to slow down and enjoy riding in new ways,” says Paul. “This Indian seemed to fit what I was after.

“I wasn’t bothered about originality. I fell in love with its distinctive looks and made up my mind to learn about it and to understand it,” he adds. 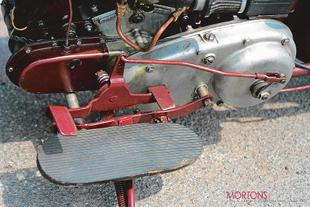 Paul confirmed the date of manufacture of his bike as 1941, from the ‘GDA’ prefix on its engine number. The inscription, ‘L & L Manufacturing Co’, which appeared only on Linkert carburettors from this date onwards, supported this.

The engine appeared to be standard, apart from having been stroked to 596cc (36.4ci). However, a seized generator meant that it had not run for some time. Generous application of penetrating oil over the course of several days got things moving freely, and no further mechanical work necessary for the engine to fire up and run.

Paul replaced the rusty exhaust with a stainless-steel pipe. He imported a pillion seat from the USA to accommodate his daughter Jasmine, making the mounting frame himself and adding folding rear footrests of British origin.

Adapting quickly to the Indian’s ‘backwards’ controls, Paul looked forward to a summer of rallies and weekend rides. However, the Indian had other ideas.

First to go was the gearbox. “It seized solid, just after the Iron Horse rally in Derbyshire. I sorted it out by reference to the original workshop manual and regular telephone calls to Calvin Underwood at the Indian Motocycle Club.” 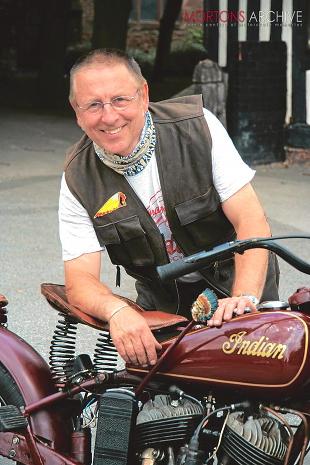 Pinion gear
Next to give up was the pinion gear that drives the cams from the end of the crankshaft. Then the cams and lifters cried ‘enough’ after the oil pump lost interest in pumping oil and, shortly after that, the dynamo set itself on fire.

Paul has cheerfully overcome these and several other minor setbacks. Where repairs have proved impractical, ingenuity has carried the day. For example, the front-wheel driven speedo now contains Skoda internals, which have identical gearing.

Paul’s experiences quickly taught him to carry a substantial toolkit, even though the Indian was designed with simple maintenance in mind. He bought a leather tool bag at a car boot sale for £2 and fitted the Indian-head gear knob at the same time, for sheer fun.

“Having fun is what this Indian is all about, declares Paul. “I ride it in rain, shine, snow – whatever.”

During the last couple of years, Paul and his Indian have made award-winning appearances at several prestigious shows, including the Welsh National, Anglesey and Stormin’ the Castle.

Paul has no doubts that he chose the right bike. “In spite of niggles and setbacks, this bike beats with my heart. It manages to be exhilarating and yet relaxing at the same time,” he says.


Starting from cold, I turn the fuel tap on and lower the brass choke lever on the left-hand side of the Linkert carburettor. Three kicks on the starter pedal feed petrol into the combustion chambers. Raising the choke now, I retard the ignition fully by turning the right-hand twist-grip towards me. It doesn’t help my train of thought that Paul has fitted a left-hand throttle body to the right handlebar, reversing its normal action, just to complicate things still further!

With the left-hand throttle closed, I turn the ignition on and kick-start the engine into life with no more than a downward push. Now comes the really difficult bit…

With the ignition still retarded and the gearbox in neutral, I press the clutch pedal down with the big toe of my left foot to disengage the drive. In order to slide the non-synchromesh transmission into bottom gear, I push the right-hand gear lever forward into second before crashing it back into 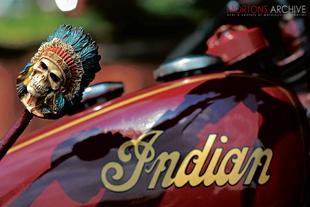 A twist of left-hand throttle raises the revs. A twist of my right hand in the opposite direction advances the ignition, audibly changing the exhaust note to something resembling a gunfight. I add a few more revs, depress the heel of the clutch pedal to slip the drive and succeed in getting the bike moving.

The engine pulls cleanly from tick-over and feels like it would be all but impossible to stall. From this point on, I know that it is vital to keep my left foot planted on the footboard while the bike is in gear. Accompanied by some deft footwork, I rock the gateless gear lever two notches forward for second gear, its selection confirmed by a further crashing sound, and then push one more notch forward for third as speed builds up.

Stability on the move is exceptional, the steering tracking predictably at any speed over all surfaces, while stout piano wire for the throttle linkage offers a handy cruise control. No wonder these bikes found favour with Wall of Death riders. I can easily imagine firing a sidearm with some accuracy while riding, too.

Both brakes perform adequately, although some sharpness in the rear drum suggests uneven wear. The front brake appears to have its original cable, so may be forgiven for a degree of sponginess.

Neutral is best selected while on the move and may be performed ‘hands free’ from first gear, with a forward press of the right thigh against the low-mounted lever. 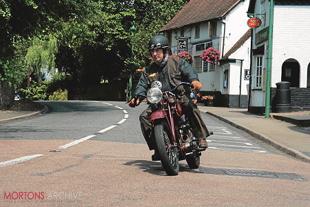 The Indian proves its virtues by forcing me to adapt to its way of doing things, and I’m a confirmed fan by the time I return to meet Paul at Hampton-in-Arden church, near his home south of Birmingham.

So does originality matter in every case? Would Paul’s Indian be a better machine, restored to its wartime colours with its ammunition boxes intact? I don’t think so. For who could contest the view that our classic world would be infinitely poorer without the café racers and specials that have sprung up at different periods in history?

Besides, Paul’s bike stops short of the cut-down ‘Bobber’ styling that was fashionable before and after the war. It has retained its mudguards intact and even has one of its two original blackout rear lamps. Attention-grabbing it certainly is, though, and a good example of the popular, non-destructive modifications that sought to enhance the looks and performance of military workhorses after WWII.

I would personally have no great enthusiasm for seeing this machine restored to standard trim, but others may disagree. What do you think?