Thomas Alexander Fermor-Hesketh, the third Baron Hesketh, inherited a fortune at an early age and spent it with notable enthusiasm. A lover of motorsport, in his mid-20s he bankrolled a private Formula One team that won a race during its third season in 1975 and finished fourth in the World Constructor’s Championship. That success ensured a healthy R&D future for Hesketh Motors Ltd, newly established on his family’s Easton Neston estate in Northamptonshire.

Although the prospect of creating and developing a motorcycle bearing the Hesketh name was discussed as early as 1974, the concept did not take tangible form until December 1977. Technical drawings, then cost projections and a wooden mock-up of a 900cc V-twin engine were all produced in-house, and most of the major decisions about the bike were made at this stage. 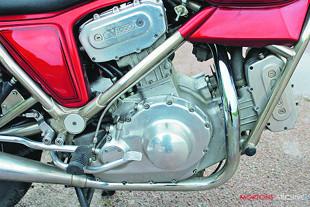 A mark two version evolved through ex-Norton apprentice Dave Bean’s modifications with a shaping file, marking the beginning of significant input from motorcycle engineers. The engine build was entrusted to Ron Valentine at Weslake, while a styling team, consisting of designer John Mockett and sculptor Steve Furlonger, set to work on plywood bodywork panels mounted upon a triangulated tubular chassis.

Hesketh Motors unveiled a running prototype on 5 April 1980 as company chairman Lord Hesketh and managing director Anthony ‘Bubbles’ Horsley sought a manufacturing partner to provide up to a million pounds for full production.

Meriden Triumph sent a representative to hear His Lordship make the telling statement that: “This is a commercial venture, not like our Formula One project which was, in retrospect, a sort of inverted ego exercise.” The name on the tank didn’t matter, he added with deliberate emphasis, admitting after a moment’s thought that if it did indeed carry the family crest, a touch of glamour in marketing it wouldn’t go amiss. Besides, there was obvious patriotism in the use of predominantly British components, foreign alternatives being preferred only where they offered manifestly better quality. 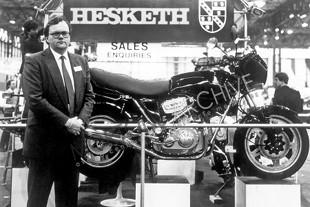 Technology consultant David Sharp, 62, owns the actual Hesketh that Mike Hailwood rode at that pre-production launch. It is one of four works development machines, of which number one is in the Barber Museum in the USA, number two is in the Hockenheim Museum in Germany and number three is incomplete. Acquired as a basket case 10 years ago, the ex-works ‘hack’ required first registration on a 1979 plate following restoration, since it lacked a frame number. It bears close scrutiny for the surprising number of components that were superseded or re-engineered for production.

Chromed Lucas indicators and a nickel-plated steel chain guard both gave way to plastic on later models. Double Yale locks secure the seat base, which clips into a modified Dexion shelving bracket and detaches completely, to reveal the air filter box for the rear cylinder in nickel-plated steel. Rear suspension units are Girling and brake discs are undrilled. Astralite alloy wheels have 25 rivets instead of the later versions’ 40 and the front wheel is 18 inches in diameter. 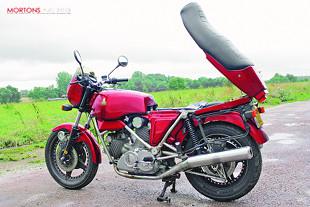 The frame lacks visible gussets around the swinging arm pivot and centre stand. The instrument cluster has a mid-1970s look, in keeping with a relatively crude rectifier and two zener diodes, allied to Lucas Rita ignition.

I prepare to take the development Hesketh out for a ride, feeling much as the official testers must have done as the launch deadline loomed. My first impression is that the seat is very tall and wide, making feet-down manoeuvres difficult even for a six-footer like me.

Limited steering lock and a long wheelbase preclude turning round feet-up in the width of a normal A-road and instead, I find it easier to roll the machine forwards on full lock while walking beside it. With both fuel taps in the down position, I switch on the ignition, lift the dashboard-mounted plastic choke lever fully from cold and press the starter button. 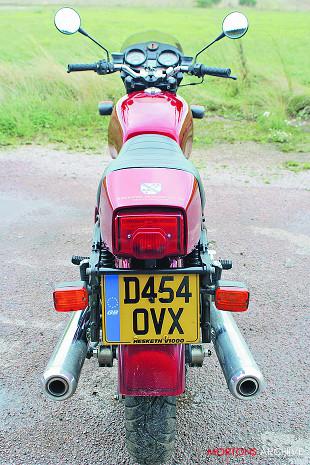 Straight away, the degree of engine noise is surprising. It’s mostly valve train and transmission clatter, and although such sounds would hardly alarm a classic buff it still contrasts with the Hesketh’s civilised image. The left-foot gear change pattern is one down and four up, with a heavy hydraulic clutch that bites late in its travel. Acceleration through the gears is brisk, if hardly dramatic. The gears themselves are slow to engage, even when matched carefully to engine revolutions, so I try to leave the motor in top gear. However, the Hesketh seems reluctant to pull below 3500rpm in fifth, with a hesitant power delivery at low revs in any gear.

Heavy steering at low speeds becomes more neutral as the machine gets into its stride above 30mph. The big V-twin’s piston stroke is short, with little appreciable flywheel effect. Stability and frame stiffness are good, and there’s enough weight low down to inspire confidence in corners, with adequate ground clearance on both sides.

Because David uses his Hesketh regularly – a policy that seems to encourage long-term reliability in examples of the marque – he has ironed out some of its foibles, for example by cutting ‘v’ shapes into the rubber cush drive within the rear hub to soften the final drive.

Overall, despite its shortcomings, the prototype has the makings of an effective sports tourer and offers a very comfortable ride.

Although a Hesketh prototype was duly evaluated wearing Triumph badges, no commercial partnership ensued and so Hesketh Motorcycles plc was formed in September 1980 under the chairmanship of Sir Barry Heath. 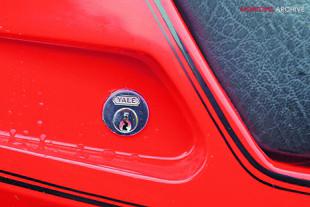 Venture capital thus raised was invested in leased premises in Daventry, where quality testing equipment costing £100,000 was installed to check that suppliers’ components met production specifications. A manufacturing launch preceded the Birmingham NEC Show in April 1981, at which the first four machines off the line were displayed in Regal Red and Empire Black paintwork.

By now, Lord Hesketh felt confident enough in the quality of the product to engrave his signature on the primary casing. Forty-three domestic dealers were recruited, with talk of a full tourer and a café racer on the drawing board, and rumours of a race team to follow.

Dave Hartell, 57, an engineer from the West Midlands, owns a near-standard V1000 with engine number 0205, which was built at Daventry. Almost every part on the production version has been tidied up from the development model and darker livery seems to suit the styling better. Hagon rear shocks, Krauser pannier frames and modern Pirelli tyres are the only visible changes he has made, yet it is worth stating that both these Heskeths have benefited from significant internal modifications since they were built.

For example, David Sharp has carefully removed the end float from his prototype’s oil pump in order to maximise flow pressure and reduce engine rattles, replacing the dashboard clock with a Smiths oil gauge at the same time. 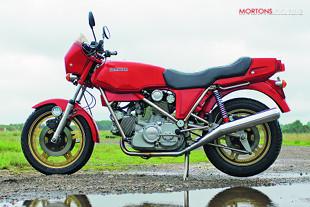 So it is significant that, when I take the production machine into the countryside south of Towcester, following a works testers’ route, it feels only marginally more pleasant to ride than the development model. Gear changes require unhurried care and neutral selection is a hit-and-miss affair. The Lucas Rita ignition still struggles to pull from low revs in top gear and engine power remains concentrated in the midrange.

Nevertheless, high gearing means that 100mph is achievable at a little over 5000rpm on the Nippon Denso instrument cluster. This coincides with the peak of the torque curve, so the V1000 is capable of making rapid progress well below its maximum power level of 6500rpm.

In spite of its shortcomings, initial reactions to the V1000 from the domestic press were generally positive: Motor Cycle Mechanics called it ‘a bargain’, Which Bike? proclaimed ‘Britain’s new superbike hope’ and Bike declared that the product was better than the hype surrounding it. Only The Guardian described it as ‘folly for the ‘80s’. Enthusiasts pointed to sound commercial thinking and whispered that each Hesketh sold would be one less BMW, Ducati or Laverda on the roads.

A smaller engine sprocket was called for, to pep up acceleration, but the real press criticism was aimed at the gearbox. Selection problems seemed to be amplified by a complex internal layout, with two countershafts positioning the drive sprocket concentrically with the swinging arm pivot. While this gave constant chain tension under load (with potential for straightforward conversion to shaft drive), it did invite considerable backlash along with noise and imprecision.

The problem wouldn’t go away and eventually prompted Hesketh Motorcycles to suspend assembly work, in order to rectify several faults caused by hasty production engineering. When machines began to reach customers from February 1982 onwards, their new owners proved to be the most critical quality inspectors, as drive chains wore quickly, main bearings failed, electrics rotted and starter clutches disintegrated. The engine ran hot and, worst of all for a new British bike, leaked oil from its sock-shaped cam chain housing. 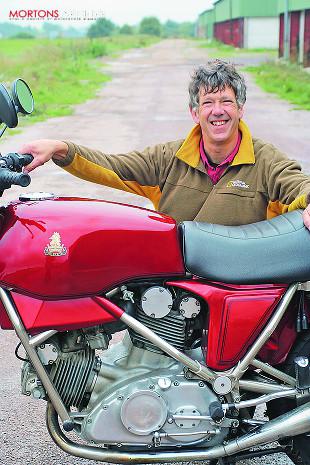 Warranty work now stretched the 70-strong workforce beyond its limits. The company’s mounting debt became compounded by supply problems and on 14 June 1982, the financial well ran dry after fewer than 150 complete machines had been manufactured, and the company entered receivership.

Which Bike? now listed the Hesketh V1000 in its Top 10 Turkeys section, claiming that ‘…all the enthusiasm in the world is no substitute for experience in developing competitive motorcycles’.

In truth, what Hesketh Motorcycles lacked most was time and money to get production right, since the Weslake-derived mechanical ethos of quality workmanship with easy maintenance remained largely intact. Indeed, the only fiddly service job involved setting the four valve clearances in each cylinder head, since access to shim buckets required removal of the camshafts. Nevertheless, replacement shims cost just nine pence each and tended to stay in adjustment after having been set.

Dave Hartell has no complaints, however, having owned his V1000 for nine years now and covered 36,000 miles all over Europe. “I’d previously owned a series of British motorcycles, the last of which was a Norton rotary,” he says. “After the rotary I wanted something with a bit more character, a bit more exhaust noise, and the Hesketh is simply glorious to ride.”