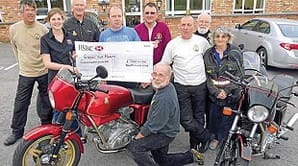 For the first time in its 30-year history, members resolved to raise funds for charity and chose to support Riders for Health (RfH). There was a good reason too. Mick Broom, who has for years provided spares and maintenance for Hesketh V-twins, once developed a motorcycle combination for RfH which was designed and equipped to help get emergency medical services to remote villages in Africa.

This time, 65 members worldwide raised £700 through their Alphabet Challenge which in essence had them riding the countryside photographing their Heskeths at village signs each beginning with the 26 letters of the alphabet – hence ‘Alphabet Challenge’. X proved challenging!

Lord Hesketh, the club’s president, endorsed three awards; first to complete, most funds raised and the most interesting travelogue, which were presented at the club’s AGM.

All agreed that it was great fun and they will soon be embarking on a similar challenge involving pub names.

Mick Broom said that he was on the mend but still in pain after the explosion in his workshop at the bottom of his garden. Mick he has finally handed over the business to Paul Sleeman, who is opening a shop in London.