When William G. Henderson announced his four cylinder motor cycle to the world in November 1911, it was not shattering news. The FN and Pierce fours had broken the ground, and multi-cylindered designs had found acceptance. The Henderson, however, was very well received, and its specification promised great things. Mechanically operated valves, a Bosch magneto, front suspension, a clutch and chain drive combined to make an attractive package which soon had the customers queueing.

Like the FN before it, the Henderson scored on reliability, but, being American, it was taken rather further. Where the FN had been tested around Europe, the Hender­son became the first known make of motor cycle to be ridden around the world. Carl Stevens Clancy was the man to do it, on a 1912 model. Added to this was the con­venience the machine brought with it, for at a time when most motor cycles had to be put on the stand and pedalled into life, or run-and-bumped, the Henderson offered crank-handle starting, and it was known to be quick to fire up. 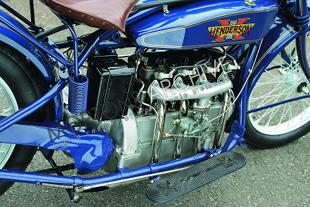 Over the next few years the design was steadily improved, with better forks, a bet­ter brake, greater comfort and, in 1914, a two-speed hub gear. The frame was also altered to lower the riding height, reduce the wheelbase and generally tighten up the handling.

By 1917, the original concept had come to the end of its development potential and the engine design was updated. As well as a three-speed gearbox and greatly strengthened clutch, the lubrication sys­tem was revised – the separate tank was abandoned in favour of a wet sump, which meant that oil was no longer delivered via a sight feed, but by splash. The new model proved instantly popular, and was used to break many long distance records, includ­ing the Coast To Coast and the Three Flags (the flags being those of Canada, the USA and Mexico).

Selling well
Everything in the garden was not, however, blooming. Although their machines were selling well, the Henderson brothers could not resist an offer to buy their manufacturing rights. The buyer was Ignatz Schwinn, who already owned the Excelsior Motor and Manufacturing Com­pany and was looking for a new machine to supplement the popular Excelsior twins. The name Henderson was retained, but the logo on the petrol tank became under­laid with a large red X, indicating the new ownership.

The Henderson brothers worked for Schwinn for a while, but the relationship did not survive long. When the break came, and it was caused by a plan to completely redesign the four cylinder engine, Tom Henderson left the motor cycle industry and founded an export business, while William went on to design the Ace four. 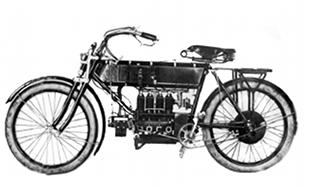 Meanwhile, an engineer named Arthur Lemon, who had moved with the Hender­sons to Excelsior, had laid out a completely new four cylinder engine and a brand new motor cycle was launched. Known as the Model K, it featured positive lubrication of all main bearings, which was a first in the motor cycle field, though common automobile practice. The rest of the mechanical specification was suitably strong, as were the new cycle parts, and the machine soon proved very fast, robust and reliable.

The Model K was improved on in 1922, when the Deluxe version was introduced.

This was more highly tuned and had better braking, and was soon being used to break more records. Rider comfort was also improved, with a new saddle and better saddle springing. Many Deluxes were ordered by the police in various cities, and the State Highway Patrol favoured them  – very few cars could outpace the Hender­son Deluxe! In addition, it was possible to order a model with reverse gear, which opened all sorts of interesting possibilities. Using a stock 1922 Deluxe, American rider Wells Bennett established a new 24 hour record at Tacoma board speedway.

The following year, he went on to take the Three Flags run record on a solo, then, when he got to Mexico, hitched on a sidecar and broke that record on the way back to Canada. The Henderson Deluxe was obviously a force to be reckoned with (to say nothing of the rider). 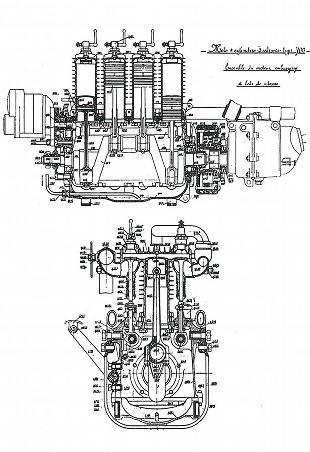 Development continued with a new frame, Ricardo-designed cylinder heads and an improved front fork. Records were set and competitions won. However, by 1928 the Lemon-designed four was running out of development potential, and thequest for more power had reduced its stamina. Arthur Constantine was poached from Harley-Davidson and given a free hand to design a new, more powerful and reliable Henderson four.

The result, introduced in 1929, was the 40bhp KJ. At the heart of the motor was a five bearing crank (previously there had been three main bearings), while the barrels sported increased finning and a new valve design improved the breathing.

Rider comfort was taken care of with balloon tyres, a new fork and better braking. The KJ soon gained public approval, and a sports model, the 45bhp KL, was introduced.

1930 and '31 saw the smooth, fast and flexible four selling well, especially to the police. It came as something of a bombshell, therefore, when Ignatz Schwinn announ­ced that motor cycle production would cease henceforth. It was 1931, and he had taken advice about the likely trends of economic recession: from what he learnt, it seemed unlikely that there would be suffi­cient demand to keep the Henderson in profitable volume production.

There was nothing wrong with the prod­uct. Unlike the FN four, the Henderson had kept up with – if not ahead of – general automotive developments, and was an acknowledged success. Ignatz Schwinn was a businessman and he made a busi­ness decision. Doubtless he was correct, but it was a sad day for the American motor cycle industry.