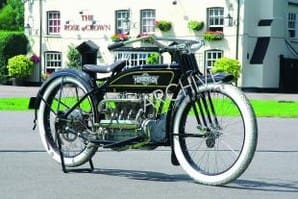 During the early part of 1911, two automotive events of enduring significance occurred on opposite sides of the Atlantic. In London, illustrator Charles Sykes designed a mascot for Rolls-Royce; the firm that claimed to manufacture the ‘Best Car in the World’ wanted its Spirit of Ecstasy figurine to embody speed in silence, smooth running and high quality. These same attributes would define products from the Henderson Motorcycle Company of Detroit, Michigan, which was founded during the same year.

History records that the ‘Rolls-Royce of Motorcycling’ epithet would attach itself to a rival English firm. Yet, it was a Henderson ‘four’ that first circled the globe during 1913, the same year that a Rolls-Royce Silver Ghost dominated the prestigious Alpine Rally in Austria. With only a 10mph top speed difference between the manufacturers’ respective four- and six-cylinder engines, could not the American contender be forgiven for claiming a degree of parity, six years before the founding of Brough Superior?

Rolls-Royce mascot
The distinctive Rolls-Royce mascot adorns more than one driveway in Surrey, where Peter Reeves lives. But the 57-year-old, who runs a firm that maintains swimming pools, is an avowed fan of old American motorcycles. Peter allows himself time during evenings and weekends to work on his restorations, planning each 12-month project with the meticulous attention to detail that has built up a business among wealthy clients. 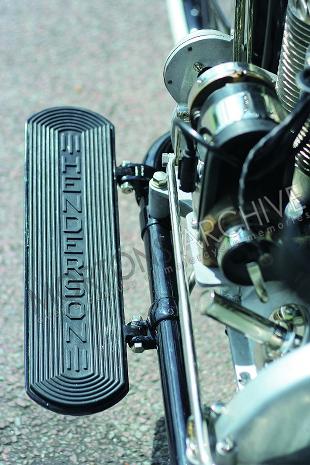 Peter’s 1915 Henderson Model E resided for many years in Murray’s Motorcycle Museum on the Isle of Man. The bike came to his attention when the unique establishment closed in October 2005. A meeting with the sale organiser at the Classic Motorcycle Mechanics Show in Stafford allowed Peter to confirm his interest without having to go through an auction, even though all he had to go on at that stage was a single photograph of the four-cylinder machine, which had come to Mona’s Isle from the mainland in 1959.

“I knew that it was rare, and old, and American,” he recalls. “I also accepted that fixing it up properly would be a real challenge. But I couldn’t pass up the opportunity to acquire one of these superb machines within the UK.”

Peter holds the positions of national judge in the USA and deputy judge in Europe for the Antique Motorcycle Club of America, and so had in mind a minimum standard of restoration from the outset. The AMCA operates its own machine evaluation system that credits factory-original metal and paint finishes, a score of 95 points or more out of 100 making a machine eligible for ‘Winner’s Circle’ rating, although Peter emphasises that the scheme is for validation only.

His first big task was to restore the engine’s four-into-one inlet manifold, which had been cut short to mount a central up-draught carburettor. A replacement proved unobtainable, so Peter borrowed one from an enthusiast in Germany to use as a template for remanufacture. The correct Schebler carburettor subsequently came to light at a swap meet in Davenport, USA. It now mounts on the end of the manifold behind the cylinders, plumbed to a heater pipe from the exhaust to prevent icing.

Thorntons of Shrewsbury supplied new rings for each of the four grey-iron pistons, although none of the individual cylinder blocks required reboring. Terry Formhalls in the New Forest reground the crank with new white-metal bearings and remanufactured the other bronze bearings. G&S Valves in Surrey made a complete set of valves, with each stem drilled for a retaining pin and machined slightly oversize to fit the original valve guides. 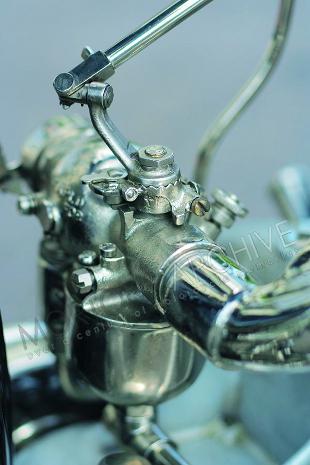 The magneto drive gear was missing, but would have been identical to the crankshaft pinion gear, so Peter had this replicated by Neve Engineering in Sussex. The original spark plugs would have been complex in construction and impractical for use, so high tension current now terminates in a set of 1940s igniters from the Green Spark Plug Company in Cheshire. The remainder of the wiring loom amounts to little more than a single cable, but Peter has been careful to use the correct wire, sheathing and terminals.

Both frame and forks required straightening, which Peter undertook himself by bolting a jig to his garage floor and using a laser spirit level to gauge alignment. A local Bentley coachwork specialist extended each crudely truncated pressed-steel mudguard back to its correct length.

Premier Plating of High Wycombe provided the correct nickel finish, but paint matching proved a problem, since so few restored examples exist for reference. Nevertheless, during the course of several transatlantic telephone calls to confirm details whenever a non-standard component required modification or replacement, a Henderson collector volunteered an old-stock wheel that had never seen daylight. Peter flew out to match the unfaded colour in situ and then shipped the paint back to be mixed and applied by Derek Landowski in Didcot.

The sprung Brooks saddle is a period alternative to the Henderson-Persons standard item, while each Firestone white tyre is the colour of natural rubber and has raised ‘NON SKID’ lettering for a tread pattern. Peter manufactured new fasteners in the correct metals on his home lathe, farming the larger work out to Locke Engineering in nearby Egham.

The restoration was completed on the day before the 2007 Bristol Classic Motorcycle Show, where it earned a best in show trophy. Since then, the Henderson has tackled a ‘long’ course of the Banbury Run, holding its own among bikes manufactured up to 1930 and winning the Sheldon Trophy for most unique machine. Peter recounts that a stalled vehicle halfway up Sunrising Hill caused the Henderson to lose vital momentum while in the higher of its two gears. However, by pausing to engage the low ratio in its chain-driven hub gearbox, he could employ engine torque to pull away up the 1:6 gradient from rest, a feat that few machines of similar age could manage. 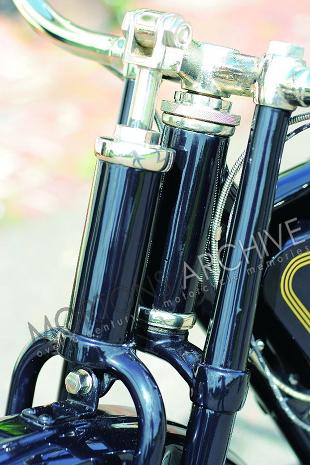 Peter explains the Henderson’s unique starting procedure while I search in vain for a kick-starter. Firstly, with the bike securely on its rear stand, open the lower petrol tap (the upper tap is to drain water) and tickle the carburettor. Retard the ignition by turning the left twist-grip anticlockwise and set the right-hand throttle to a fast tick over. Both grips are graduated with a 1-10 numerical scale, although there is no fixed pointer, and each connects to an external linkage with cable operation from the lower handlebar tube.

Next, fold out the hand crank from its rear-mounted clip and ensure that the clutch lever, innermost on the nearside, is engaged fully forward on its ratchet. Crank the engine over a couple of times by hand to prime the four separate cylinders, pushing the handle inwards to engage drive.

A sharp upward pull fires the engine, which purrs like a baby Austin car as I prepare to venture this nonagenarian motorcycle into modern traffic. The outermost gear lever has only two functional positions, despite being on a ratchet, and a jagged tooth jaw-type clutch engages two planetary gears within the rear hub, meaning that the drive sprocket rotates at a different rate to the wheel. The compact Eclipse clutch unit at the engine sprocket houses an astonishing 18 metal plates, but I opt to remain in the higher ratio and paddle away from rest, pulling the clutch lever fully back once momentum is gained. Torque engages straight away, making this a practical single-gear machine for anything bar a stationary traffic queue or steep incline.

Right-foot pedal
The Model E has a single rear brake only, operated by a right-foot pedal, so I attend closely to forward observation when approaching my first busy roundabout. Having felt the handlebars flop hard to one side while raising the bike onto its centrestand, I expect cornering to be an instructive experience, but the Henderson tracks predictably. Earlier models had a longer wheelbase that allowed a passenger to sit on the petrol tank, with feet on the front wheel spindle ends. Even with folding footboards, Henderson could boast that no major parts protruded beyond the frame, to minimise damage in the event of a spill.

I am impressed that this 1915 machine can cruise effortlessly at 50mph. The eight inlet-over-exhaust valves clatter discreetly as I relax into a riding position that is as upright as an Edwardian dinner table, with no queues of traffic behind and no one lining up to overtake me. Most surprising of all, a stiff twist of the non-return throttle propels me towards an estimated 70mph without dire effects on stability. Truly, this is an exceptional motorcycle in all respects.

The Model E came during what the American magazine Motor Cycling called a time of ‘expectancy and readiness for big things’ at Henderson. The firm, founded by brothers William G and Tom W Henderson, first offered a 934cc four-cylinder motorcycle for sale to the public from January 1912. New York journalist Carl Stearns Clancy set off on a Henderson that autumn, to attempt the first circumnavigation of the globe by motorcycle, returning in triumph a year and 18,000 miles later.

An early ‘torpedo’ tank became a flat-sided affair for the Model B of 1913 and a rear-hub, two-speed gearbox, initially manufactured by Eclipse and Thor, appeared on the following year’s Model C. This became Henderson’s own design for the Model E of 1915, which was most notable for a reduction in wheelbase, from 65in to 58in, through footboard relocation. Further Model E refinements included a longer starting crank and handlebars, stronger front forks and a new, lower sprung saddle. Engine enhancements included new ball-jointed rocker arms, a heat-treated crankshaft with hardened pins, a new camshaft and improved lubrication.

Production doubled at this time to meet demand, while economies of scale made possible a price reduction of $30 on both the regular and two-speed models. Company sales manager Hugh Fargo was already courting “…a better class of people (who) are buying motorcycles,” fuelling comparisons that would later be made with Brough Superior. Indeed, Henderson cited a list of ‘20 leading features’ that set its machines apart, while even its most basic optional equipment was priced to include installation by a dealer. 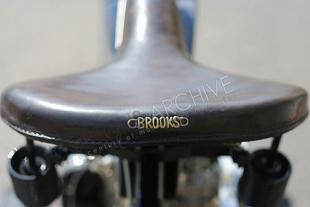 The machine’s quality and performance reached a peak with the Model G of 1917, which offered three speeds within an engine-mounted gearbox that drove through a heavy-duty clutch. A stock example averaged 48mph over 1154 miles in 24 hours, and sales rose rapidly as word spread about these practical alternatives to big twins. Nevertheless, spiralling production costs left the young company under-capitalized, until it was bought by the Excelsior Motor Manufacturing and Supply Company on 17 November, 1917.

Henderson would go on to achieve great feats of engineering and performance during the next 14 years, but in a sad irony, co-founder William Henderson died in his thirties in 1922, like Charles Rolls some 12 years earlier, while testing one of the company’s products.