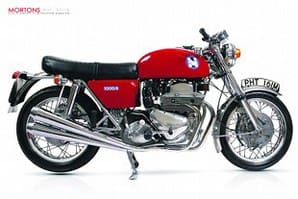 This Healey 100/4 may look familiar to longer-term readers of The Classic MotorCycle, and it was indeed featured previously on our pages, in the October 2002 issue. But the chance to put it through our photographic studio was too good to miss – it’s such an authentic, unrestored and important example of the brief but brave attempt to resurrect the famous Ariel Square Four and update it for the 1970s.

Owned by Ariel OC stalwart Paul Jameson, this particular machine was the first production Healey 100/4 and remains unmolested – though it has been used by Paul extensively since he acquired it in March 2001. Paul, a 52-year-old chartered civil engineer from Malvern, bought the machine as he’d ‘always wanted one’ since his early days of motorcycling, which started when he passed his two-wheeled test in 1970. Having owned all manner of Ariels it was only natural that Paul would eventually own what is surely the ultimate development of Edward Turner’s original Square Four. 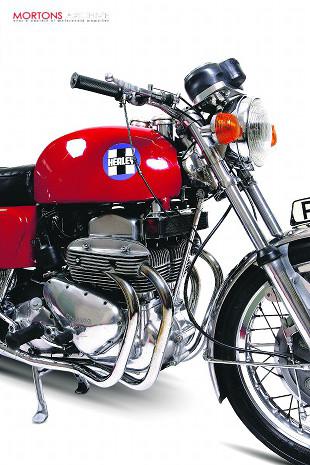 Ariel’s own Square Four went out of production in 1959, along with all other Selley Oak-made four-strokes, as the firm switched its entire attentions to the two-stroke Leader. The ‘Squariel’s’ passing was lamented by many, and when it went, it was the biggest capacity British machine being built. However, by the time of its demise the Square Four was hopelessly outdated, still relying as it did on old plunger-type rear suspension.

During the 1960s, the Healey brothers, George and Tim, set up a spares business for Square Fours. When they bought a Fritz Egli chassis from Roger Slater – who was then involved with selling the Swiss Vincent specials – a seed was sown and a plan formulated. Soon, the Healey brothers had a complete machine, with an Egli spine chassis and a refurbished Ariel Square Four engine. It was decided to go into production, using a self-made Egli-type frame, to which high-end proprietary components were added – including a Grimeca four leading shoe front brake and Metal Profile forks – and what emerged was a handsome creation, which despite its mixed parentage, performed well.

However, the world into which it had entered was one of Honda CB750s and Kawasaki Z1s and, with the massive BSA/Triumph group struggling financially as well, nobody wanted to take a financial risk on the venture and the Healey brothers couldn’t secure the necessary funding to build and develop their machines. Though several were built – including later versions that used cast wheels and disc brakes – there were never many, but the Healey 1000/4 offers a fascinating footnote to the Square Four story.