The horizontally opposed BMW-style 750cc model XA Harley-David­son is a sure-fire attention grabber at any motor cycle gathering—but as is so often the case with rare machines there is a long, long tale a-winding behind this particular Harley; one which led owner Jim Dowdall all the way to Wildcat Ridge in California.

"I've been a Harley freak for years, and a military vehicle enthus­iast as well, so when I spotted the XA at a Military Vehicle Conserva­tion Group sale at Thruxton I simply couldn't resist it. The guy who had it on his stand had imported two from Texas in 1982, and had sold one to a military museum in Belgium. The other he intended to keep because as far as he knew it was the only one in England," explained Jim Dowdall.

Eventually Jim persuaded him to sell and parted with a large chunk of cash on the understanding that the XA had been rebuilt and was in reasonable running order.

"But I got a nasty shock when I got it home and took a barrel off. There was a good eight-of-an-inch play on the big-end and obviously I had a lot of work ahead of me before I could enjoy riding the XA," said Jim. When he had finished stripping the engine he found that the big-end bearing cages were missing, the rollers were worn square, and the one-piece forged crankshaft was so badly damaged that it couldn't even be reclaimed.

"Harley only ever made a thousand of these XA models. The American military authorities, obviously im­pressed by the BMWs that the Germans were using in North Africa, issued a specification to both Harley and Indian and ordered a thousand prototype models for evaluation. That must have been in 1941 for I believe the machines were made and delivered either late in '41 or early the follow­ing year".

The military spec included shaft-drive, unit construction, good ground clearance and a twin-cylinder engine (interestingly the Indian version was fitted with a vee-twin engine set across the frame in modern Moto Guzzi style). But by the time the evaluation tests were under way the Jeep had won the battle for adoption as the army's maid-of-all-work and no further orders were placed for the two motor cycles—a disappointment that cost both factories dear and is said to have been a contributory factor to Indian's eventual demise.

.These factors make spares hard to find—and the situation wasn't eased by the fact that the XA had an inbuilt disaster area. No sludge trap was incorporated, so unless the oil was changed regularly at short intervals the oil-ways to the big-ends choked-up and the bearings soon disintegrated—just as the ones on Jim's machine had done.

"There was only one thing for it. I settled down by the 'phone and rang a Harley friend in the States. He put me on to a Harley dealer whom he thought might help—and he in turn gave me the number of a guy he thought might have some XA spares. Eventually the trail led by an old guy living at Wildcat Ridge near Modesto in California—but he wasn't on the 'phone! My contact told me he knew that this chap had bought a batch of 40 of these Harleys some years ago and he thought he still had a few around the place.

"So I sent him a cable asking him to  'phone me collect and sure enough, a few days later, he came through. We had a chat and it trans­pired that he had most of the parts I needed. So I told him I was on my way . . . I caught a plane to San Francisco the next morning, rented a car and drove out to Wildcat Ridge.

"Like every other Harley person I've come across he was really help­ful. I spent a whole day with him and we stripped three engines he dragged out from under a bench to get the spares I needed, including a brand new crank that had never been run."

Pistons and barrels
Another problem had been pistons and barrels. Those on the machine had been bored to the limit and the pistons were maximum oversize. But through the Harley grapevine Jim found an enthusiast in Virginia who had new, plus-40-thou pistons and he eventually arrived home staggering under the weight of a 401b bag of spares. 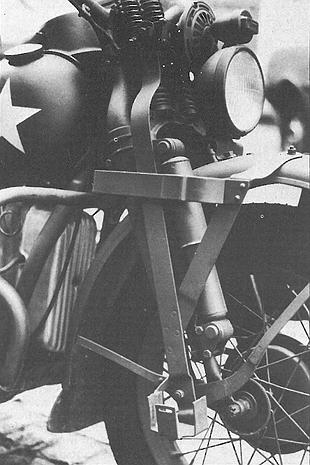 "I had the original barrels re-sleeved to take the pistons and soon had the engine rebuilt. The bore and stroke are square at 3 1/16 x 3 1/16 to give an exact capacity of 45.038 cubic inches (738cc) and the compression ratio is 5.7 to one—obviously designed to run on low octane wartime "pool" fuel. Gearbox is a four-speeder with left-side foot change, down for first and then up for the other three; and there is a useful little hand lever on the right that sticks up from the gearbox which is handy for selecting neutral," said Jim.

But while the Germans were already producing their very advanced over­head valve BMW R75 by this time, Harley stuck to side valves and sur­prisingly, in view of the German success with sidecars for carrying machine guns and assault troops, the American machine was designed for solo work.

"One quirk is that, like the police Harleys, the XA has the twist grip on the left. They did this so that the rider's right hand was free to shoot at whoever he was pursuing! But while the police bikes had a foot clutch the XA has a hand clutch—the lever operated by the right hand!" explained Jim as he wheeled the Harley out from his London mews garage prep­aratory to starting it.

Ignition is by coil with automatic advance, concealed within the engine housing, and the Linkert carburettors are left and right handed (and stamped "L" and "R" for easy identification). The kick-start swings outward as did those on the old BMWs but Jim soon had the engine burbling happily.

He set out for a warming-up lap of the surrounding roads and then it was my turn to sample the left hand throttle and right hand clutch. Suffice to say that I didn't hit anything and thoroughly enjoyed my little wobble round, though what would have happened had there been an emer­gency I hate to think.

The riding position is good but I found the gear-change tricky and the odd combination of foot-boards and footrests disconcerting. Suspension is what the old time roadtesters used to describe as "firm". The front fork is in fact straightforward Harley of the period, with a hydraulic damper bolted to one leg, while simple plung­er springing allows the rear wheel to move up and down a couple of inches —bringing back memories of pre and immediate post-war Nortons that I used to own.

Wet sump
The wet sump is protected by a metal plate and accessories include a leather scabbard for the Thompson sub-machine gun, mounted on the offside of the front fork and balanced by a metal ammunition box on the other side. There are special panniers at the rear. "Because of the rear suspension these are only two-thirds the depth of the normal Harley pan­niers and to protect their contents when they bang on the top of the plungers the bottoms are metal plated. You can imagine how difficult they are to find but I picked up a good­ as-new pair in the States," enthused Jim with that pride that only a true enthusiast who has lovingly rebuilt a machine knows. 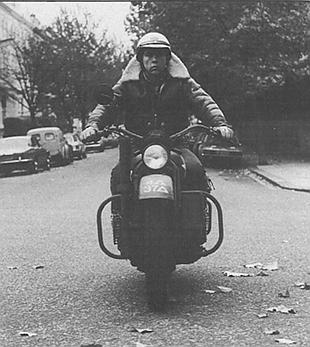 A plate attached to the rear of the fuel tank warns the rider not to ex­ceed 65mph but Jim only finished the rebuild just before the XA's first public appearance at the Brands Hatch Festival of a Thousand Bikes and doesn't yet know what she'll do.

Certainly the XA seemed very happy cruising along around the 50mph mark and I got the impression that this 41-year-old American twin would make an ideal touring mount. Jim finds that the XA with its low centre of gravity corners better than is ex-US Army WLA45 vee-twin Harley-Davidson: "You can lay the XA over until the footboards scrape —it's really stable," said he—but then he is a film and television stunt­man who has performed two and three-wheel stunts in many major productions, including the Arnhem epic A Bridge Too Far and the latest James Bond, Octopussy.

As we stood discussing the XA outside Jim's garage his phone rang. It was a Harley enthusiast with news about his latest restoration project—a 1941, 1,200cc Harley-Davidson that a car-dealer friend had taken in part exchange and had started to rebuild in civilian trim. "It seems this machine was sold to the Spanish authorities and was used as part of General Franco's motorcade. It would be nice to put it back to the condition it was in in those days," said Jim when he returned from the 'phone. So maybe his next trip abroad will be to Madrid… it's certainly nearer than Wildcat Ridge.