One hundred years of continuous manufacture and over 3,000,000 motorcycles later, Harley-Davidson is still going strong. The company started slowly, building only three machines in their first year, suffered lean periods during the Thirties and again dropped to under 10,000 models in 1963. They struggled with quality control during the AMF years then re-emerged stronger and more focused, finally breaking the 100,000 motorcycles per year barrier in 1995.

Harleys are big motorcycles for big mileages and lifestyles. And at 781lb they don’t come much bigger than Steve Jones’ Early Shovel Electra Glide. Yet, as I later discovered, this pink Harley – known by its owner as Elvis – is a big softie with a heart of gold who eagerly takes good care of its charges. 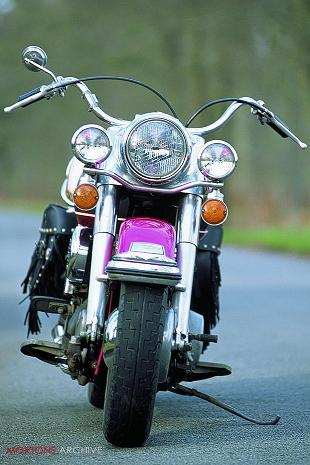 Born in ‘68 at the Harley-Davidson factory in the industrial city of Milwaukee, Wisconsin, Elvis is believed to have been destined for the Canadian market. At least, that’s where it was imported into the UK from on 6 June 1977. In 1980, Steve Jones spotted Elvis parked outside a Dereham, Norfolk garage. Having done the rounds of Kawasaki Z1s, Norton Commandos and other classic machinery including a 1924 two-speed 350cc Douglas, Steve was becoming attracted to all things Harley – surely an ideal motorcycle for a big man who stands at 6ft 2in.

Seeking the owner, who turned out to be the garage proprietor, Mr Jones discovered that despite standing on the forecourt the enormous pink Electra Glide wasn’t for sale. Its owner and his wife used it two-up with a second set of footboards for trips around East Anglia. An amazing thought to Steve and I as, although the ample seat is superb for one, quite how two squeezed onto it with any degree of comfort baffles us.

Phone number
Reluctantly leaving the Harley behind, Steve left his phone number, just in case! Over the next years he bought other Harleys and has been seriously involved with the marque for more than 17 years. Over a decade had passed since Steve first spied the Electra Glide when, out of the blue, his phone rang.

“Still want to buy my Harley?”

Resisting the, ‘eh? what?’ reaction, Mr Jones soon discovered he was discussing the Electra Glide he’d last seen at the Dereham garage 12 years earlier. Memories of the pink Harley with fat tyres, shiny paint, sparkling chrome and clean alloy flashed into his mind. 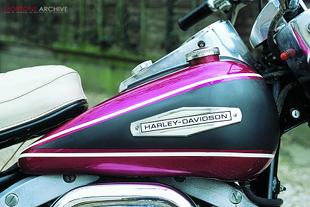 Elvis, as the Electra Glide has become known – although no-one’s admitting to me why – looked in a sorry state. Following a motorcycle crash on another machine, in which its owner’s wife injured a leg, the Harley was abandoned in a scruffy out-building. Tipped over on a pile of collapsed cardboard boxes, Elvis’ front mudguard was damaged and rusty, oil had dribbled from the engine and the shiny original finish was dull. But with under 15,000 miles on the clock, its charm shone through, and the deal was done.

Back home, after minimal fettling, fresh fuel and the carburettor choked, Steve connected Elvis to a car battery with jump leads, pressed the self starter button and…a deep rewarding ‘potato, potato, potato’ barked from the twin’s exhausts. And that’s really about it!

Front mudguard
Work to ‘recommission’ the Electra Glide was minimal. A thorough clean had the paint and bright work shining again – except for the front mudguard, which was later re-finished. Steve resisted polishing the crankcases and primary drive covers, as originally they were left ‘as cast’ by the factory. With fresh oil in the 74cu in engine, it was off to the MOT testing station. 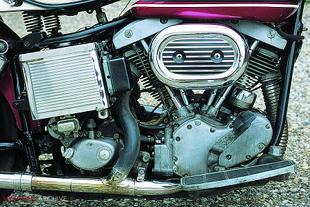 Since returning to the road, Steve has obtained an age related 1968 ‘F’ registration plate for Elvis in place of the 1977 one it wore, fitted new modern profile tyres and carried out work on the rear ‘car type’ hydraulically operated rear brake. The front drum alone doesn’t do too well and slowing this giant Harley needs input from the rear brake too, which was unfortunately under performing thanks to its tired master cylinder. A new master cylinder restored stopping power.

One of the major attractions of Harleys for me is the diverse specifications to which owners fettle their machines. Fun aided by the fact that many parts are interchangeable, or can be made to fit well with minimal effort. And this is how Steve rides Elvis. The giant screen and enormous panniers are stored in the workshop, replaced by the tasselled leather luggage you can see here. They’re ideal for a few tools, clothes and essentials supplies while the tent is strapped alongside the offside pannier.

My Harley Davidson experience is limited, I have only ridden three modern examples (two 883s and a Fat Boy), hardly enough the make me a world authority, but enough for me to understand a little of what the Milwaukee V-twins are about.

More manoeuvrable
Surprisingly, they’re more manoeuvrable and stable at low speed than you imagine – substantial wide bars and a low centre of gravity help here. They can be ridden with confidence along twisting country lanes, through quaint market towns with narrow streets, or just down to the shops. But forget all that! Head for the open road. That’s what they’re for, and that’s where Elvis is going now. 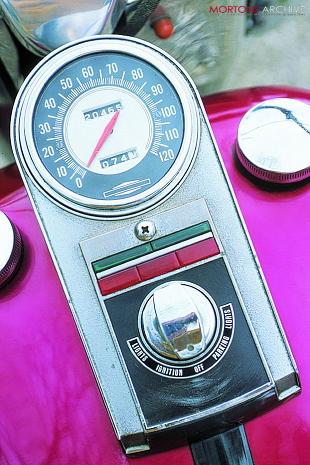 With Steve’s minimal advice – “enjoy yourself” –  ringing in my ears I press the forward mounted left hand gear foot lever down in first and am rewarded with a ‘clonk’ – just like the other Harleys I’ve ridden. Then I ease the clutch out and open the throttle. Like any well balanced motorcycle there’s no nervous wobbles or weaves. The lazy power encourages me to change up, and again, and again. A couple of miles and two road junctions later I pull into a lay-by and kill the motor. I want to get the feel of this giant motorcycle which, along with its later cousin the Fat Boy and a Honda Goldwing, is the heaviest solo I’ve ever ridden.

The bars are pleasing, not only are they wide, which suits Elvis, but they are devoid of clutter. A couple of buttons, limited switch gear, the twistgrip which neatly matches the left grip, brake and clutch levers. And that’s it. Speedometer, ignition/light switch and tell tale lamps for charging, neutral and indicators are tidily mounted in a tank top console.

Already happy with the action and position of gear change and large rear brake pedals, the other lay-by test is of my ability to manhandle 781lb of cycle. Earlier, I’d watched Steve roll Elvis back by standing astride, firmly grasp bars, lean and paddle. And yes, it needs only modest effort to set the plot rolling. Moving forwards is equally easy either astride, or beside, the pink Harley. Although not as tall as Steve, I do have long legs – which I’m sure helps me. How a smaller rider would manage, I simply don’t know.

Before setting off, I flick out the sidestand, lean the Electra Glide over and step off, totally confident the bike will roll neither forwards or backwards. As Elvis leans onto the stand it locks into position and is only released when the Harley is pulled upright again. Now that’s neat. Equally neat is the hinged rear mudguard for easy wheel removal.

Thumbing the start button I’m away. Despite employing minimal revs I’m sitting at 60mph in moments. Relaxed pedal operation ensures total silence on each gearchange, either way in the ‘box, and with no need to blip the throttle on downward shifts. Neutral is easily found when stationary, my reward a red glow from the tell tale light. Wearing an open faced helmet, I’m finding I can hear other road traffic over the engine and exhaust notes. The motor is mechanically very quiet and although the exhaust noise is deep, it’s far from loud and is vented just behind the rear tyre.

A couple of miles down the road and I’m trailing ‘Farmer Brown’ cruising round a sweeping bend at a steady 45mph. As the curve begins to straighten, I see the road is clear, lean Elvis a little more, dial in a few more revs and moments later a glance in the mirror confirms the mud spattered Land Rover is disappearing fast, backwards! Quick manoeuvre? Yes, but I felt as though I’d only given the motor another couple of dozen revs and the thought of dropping a cog or two hadn’t occurred. It’s that easy.

Reluctantly feeling its time I returned Elvis, I pull off the main road into a lane on the left to complete a ‘U-eey’ forgetting I’m on a very big motorcycle. Oh, you silly boy you, Richard! This is a VERY narrow road! The choices are to continue down the lane in the vain quest for a better spot, or into first, swing to the very edge of the road, onto full lock, right foot down, feather clutch and, using just a few inches of the offside grass verge, I’m heading back from whence I’d come. I couldn’t do that on a Clubman Goldie or Velo’ Thruxton. 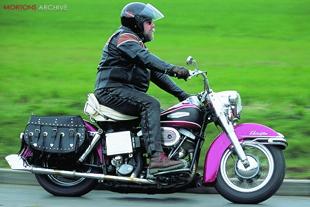 Until now, I’ve used both brakes for stopping but, with a clear road, I try the front alone; even as my knuckles whiten, its effect is underwhelming, which means the back one must be pretty good. I don’t think I’ll stamp on that too hard; I’m sure it’ll lock the wheel – an opinion Steve confirms on my return to our little group waiting on the roadside somewhere in the Brecklands.

I have to admit I’m not a Harley person; big singles, nutty two-strokes and anything built before 1940, that’s me. But I’ve quickly grown to like Elvis the Electra Glide. Push button starting, big lazy engine, mile munching appetite, head turning appearance and a fine company reputation as a leader in the tourer market for the best part of a century. As American as a Cadillac, as Sixties as the mini skirt and as outrageous as the Rolling Stones – that’s Steve’s pink Harley.

Yes there are plenty of days when I could live with all of that.