Buddy was a prolific American singer-songwriter and his work influenced later musicians, like the Beatles, Rolling Stones, Bob Dylan and shaped the popular sound for decades to some.

Having just returned from a world tour, Buddy Holly and the Crickets each bought new motorcycles to celebrate their hard work and good fortune. They visited Ray Miller's Motorcycle Shop in Dallas, Texas. Joe Maudlin, the Crickets bass player, fell in love with a Triumph Thunderbird. Drummer Jerry Allison bought a Triumph Trophy while Buddy was transfixed by a black Ariel Cyclone 650cc and purchased the limited edition model – one of only 200 that were built. The trio purchased matching Levis jackets and peaked caps and rode the 350-mile trip home in a thunderstorm. The bikes were  purchased on May 13, 1958. 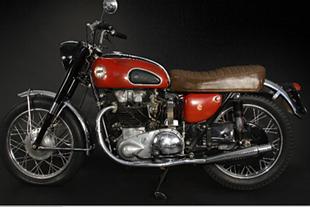 The following year Buddy was tragically killed in a plane crash, along with J.P 'The Big Bopper' Richardson, Richie Valens and the pilot, Roger Peterson. The press dubbed the event as 'the day the music died'. Buddy was 22.

The bike stayed with the Holly family until they sold it in 1970. In 1979 it was presented to close friend Waylon Jennings, as a birthday gift on his 42 year. Waylon died in 2002.

The bike is beautifully preserved but hasn’t been run for 20 years.