There are those who march towards the sound of gunfire. So it was with the executives of Harley-Davidson.

Harley's roots go back to 1900 in Milwaukee, Wisconsin. Boyhood friends and bicycle enthusiasts William S Harley and Arthur Davidson, both with jobs in engineering, built their own sin­gle cylinder engine and fitted it into a cycle frame.

Despite having to play second fiddle to Indian, Harley developed into a highly profitable company. But the family firm was to face its stiffest test in the wake of the 1929 Wall Street crash. Times could hardly have been worse, with motorcycle sales on the floor. 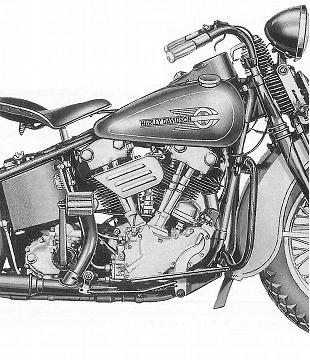 Workers faced a 10 per cent pay cut, with the owners' salaries reduced by half. They fought back, dreaming up all sorts of sales stunts with their dealers, but production was well below capacity. Harley even diversified into indus­trial engines for a couple of years, although the venture was not a success. Another manoeuvre was to arrange for Harley-Davidsons to be made under licence in Japan.

Harley's directors knew that they had to do something, and they didn't lack courage in adversi­ty. As early as 1931 they decided that only a radical change could save the company. It was overdue, for the H-D range, with the exception of the works racers, had become a little staid.

Nevertheless it was a decision that took nerve, with a large investment required at a time when dollars were in short sup­ply. William Harley was the engi­neer who laid out a new engine.

Major innovation
The major inno­vation was a move to overhead valves. Harley was known for lum­bering side-valve twins, inexpen­sive to manufacture and simple to maintain.

Side-valve engines never did win prizes in the efficiency stakes. The mixture takes a devious path to its eventual explosion and is at too high a temperature when it finally reaches a less than ideally shaped combustion chamber.

Harley had employed overhead valves in racing engines, and an overhead inlet/side exhaust layout in its roadster twins. But an all-new ohv twin aimed at the enthu­siast was a significant departure.

Fundamental changes to existing Harley practice included dry sump lubrication in place of total loss. A single four lobe camshaft now catered for each cylinder, helping to maintain valve timing and reduce mechanical noise. A four-speed gearbox with constant mesh was designed to replace the tradi­tional three-speeder, married to a new clutch, foot operated as usual. It was to be an almost entirely new machine — a sudden revolution rather than evolution.

Engine displace­ment was 61 cubic inches, or 1000cc, a classic size on both sides of the Atlantic. When word got about, the model quickly became known as the Sixty-one and it also acquired a graphic nickname: Knucklehead. 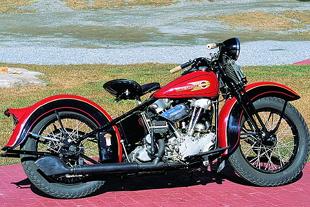 The Sixty-one was to be avail­able as the Model E with a com­pression ratio of 6:1, and the EL with a 7:1 ratio. Claimed power outputs at 4800rpm were 37bhp for the E, and 40bhp for the EL. That was almost twice the power of the side-valve Seventy-four. Compression plates were avail­able for the engines of machines bought for sidecar use.

In the British motorcycle indus­try, five years was reckoned to be about the right length of time that it was sensible to allocate for the development of a new model. You might expect the Americans, with their finely honed series produc­tion techniques, to be quicker off the mark. However, it was 1936 before Sixty-ones started rolling off the production line. And even then there were a number of last minute hitches.

Originally planned for the 1935 model year, the new model was delayed until 1936 for a number of reasons. Downsizing the engineering department at Harley's factory in response to the economic slump didn't help.

In 1935 production was finally signalled, but the prototypes might just as easily have been scrapped. Financially, Harley-Davidson was close to ruin.

The Sixty-one, or Knucklehead as it was soon named, helped to save the company from imminent closure. The engine's rocker arms were enclosed in castings. On the right hand side the rocker shafts were secured by large polished nuts. These give the tops of the heads some resemblance to fists. Hence the model became known, affectionately, as the Knucklehead. 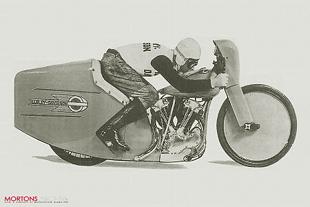 The Knucklehead looked excit­ing. Its ohv engine was carried in a new frame that also housed the continuing side-valve engines, with a single top and twin front down tubes. There was a stylish teardrop petrol tank, with welded i rather than soldered seams, a tank-top instru­ment panel and a revised front fork and steering geometry.

The Sixty-one might have looked like a clear winner from the start, but there were serious teething problems. The lubrication system produced oil leaks all over the place and initially the frame couldn't handle the Knucklehead's poke. More than 100 engineering changes had to be made during the Sixty-one's first year.

An initial production run of 1600 had been planned, but dealer orders ran to almost 2000. Meanwhile, Indian launched a new model, an in-line four. There was nothing revolutionary about this configuration, but Indian managed to get it dramatically wrong. This was Indian's worst, while the Sixty-one turned out to be Harley-Davidson's best.

Joe Petrali took the US speed record with a much-modified and streamlined Sixty-one at 136.183mph on Daytona Beach in March 1937. Harley's image was much improved by this and other successful attempts at record breaking.

The Knucklehead was an endur­ing sales success. Its launch marked a turning point in Harley-Davidson's fortunes.

The innovations of 1936 came to be incorporated in later models, the family resemblance visible for decades. You may have your own opinions, but I think it's the Knucklehead that made Milwaukee famous.