Which was just a bit too much for Wal Phillips, who was standing nearby. "Some­thing well is!", he replied. "And I ought to know, because I used to have the job of clean­ing the something thing!"

In fact Wal, back around 1928, had been very much more involved with the model than that, as we shall see. But first, the his­torical background.

Been a classic target
To pack a hundred miles into an hour had always been a classic target, and Claude Temple had first achieved it in September, 1925 by averaging almost 102mph for an hour on his 996cc ohc OEC-Temple at Montlhery, near Paris. But the publishers of The Motor Cycle then came forward with a silver cup for whoever first did the ton-in-an-­hour on a 500cc model — and on British soil.

The 'on British soil' bit was the sting, because the only possible venue for an attempt in Britain was the concrete bumpi­ness known as Brooklands track, Surrey; and a militant local residents' lobby had ensured that no motorcycle — record-breaker or not—should venture on to the track unless it was equipped with silencers (which was the origin of the famous Brooklands 'cans', of course).

Brooklands was another matter, and most of the select band who thought they had the ability to break the record soon lost interest. The exception was Bill ('Nickel-plate') Lacey who, on the evening of Wednesday, August 1st, 1928, wheeled out his immaculate 498cc Grindlay-Peerless-JAP and, at a nod from the official ACU time-keeper, got cracking. 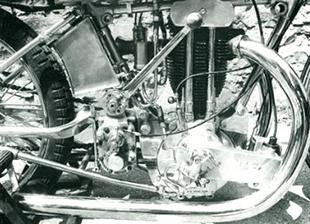 Grindlay-Peerless classic British motorcycle engine image The Motor Cycle of the following week reported it this way: '. . thirty, thirty-one, thirty-two, thirty-three laps and Lacey was lapping at over 105mph. The man was a mar­vel… They were breath-catching moments, those last few, when anything might have happened. But nothing did, and at the end of one of the most hectic hours he can ever have known, Lacey stepped off his still almost spotless Grindlay-Peerless, just wiped his streaming eyes, and smiled broadly and hap­pily'. He had covered 103.3 miles in an hour, and the coveted silver cup was his.

Bill and the bike went on to do a further complete season of Brooklands racing in which the Grindlay-Peerless was never out of the first three, but then the JAP works asked for the return of the engine, which had been on loan; they now wanted to produce a reasonable facsimile for general sale.

Redis­covery of the Grindlay's remains
When I interviewed Bill Lacey for an arti­cle in 1971, following Gerry Belton's redis­covery of the Grindlay's remains, he commented: "Vivian Prestwich accused me of ringing the changes on them. He swore that it wasn't their engine that I had returned —and neither was it, in a manner of speaking, for the rocker gear, rocker-box castings, pushrod tubes, and the pushrods running direct on the cam followers, were all special items of my own manufacture. But what didn't go back to the works were the cams!"

Grindlay-Peerless now decided to cash-in on the publicity by building a very limited batch (only six, of which one still exists) of 'Lacey Replicas'. These were specially prepared by Wal Phillips and, as Bill Lacey explained: "The idea was that they would send the bikes to me and I would go out on each one and lap Brooklands at 100mph. They would then be sold to cus­tomers with my personal 100mph guarantee.

"This we did, but the machines were not quite like the record-breaker. They had the early JAP speedway engines, and production Webb front forks instead of my experimental Brampton fork with prototype progressive friction damping."

Indeed, a speedway JAP motor now replaced the special works job in the Lacey frame, the next owner of which was Eric Fernihough. This, however, was something of a come-down, for Eric employed it as a hire bike, letting it out at £5 a time to those who wanted to earn a BMCRC 'gold star' lapel badge by lapping the track at 100mph in a race.

"It was the best-handling bike at the track," said Bill, "which is why Fernihough rented it out as a reputation builder. I used to demonstrate the handling myself by taking the bottom of the Byfleet Banking at an angle of 30 degrees, hands-off."

However, it was to have one further moment of glory, for a photograph in The Motor Cycle for June 18th, 1936 showed F.L. Beart (490 Grindlay-Peerless-JAP) well clear of the deck as he soared over the crest of the famous old Brooklands test hill. "The Grindlay concerned", said the report, "was originally owned by Bill Lacey, and the frame still bears the dull plating that characterised Lacey's machine".

That day, Francis Beart broke the hill record that had been standing since 1925, with a time of 6.99 secs — an average speed of 34.35mph up a 1-in-4 gradient. So far as is known, that record still stands; and thankfully so, for it was a mighty dodgy busi­ness. At the top of the hill, the bike sailed through the air for twenty yards before land­ing half on the grass and half on the roadway. Unable to hold it, Beart slid to earth, luckily without damage.

Thereafter the machine dropped out of sight until, in 1971, Gerry Belton of the Incorporated Sprint Organisation (and, nowadays, visitor services officer of Exmoor National Park) was rung up by a friend who, years ago, had worked with Eric Fernihough. Under a pile of junk in a shed he had found the remains of a track bike — just a rolling-chassis comprising frame, wheels and most of the front fork; "and if you want it, you had better hurry, because it's about to be thrown out for scrap!"

Some while later Gerry rang Bill Lacey at his Silverstone workshop. "Bill," he said, "I think I've found your old bike. At least, I've shown it to Wal Phillips, and he agrees it could be yours."

"Are the tank supports brazed-on or clam­ped?" Bill wanted to know.

"Clamped", came the answer. And that was the clincher, because although the tanks of the six Lacey Replica models were carried on brazed supports, Bill insisted on clamping his tank supports to the frame tubing, to allow for flexing as the machine buc­keted over the Brooklands bumps and so avoiding any fracture of the tank seams.

Grindlay-Peerless classic British motorcycle artworkBut it was more than that, because the fork was obviously Brampton, and still featured one strut of the patented progressive dampingsystem. The intention now was that Bill Lacey would restore the bike himself, and it was at this stage that I carried out my interview, with Bill standing beside the Grin­dlay's rolling chassis.

Evidently the plea did not go unheeded, for now came a remarkable happening. Out of the blue a wooden box containing another JOR-type JAP racing engine of the correct type was left anonymously at Bill Lacey's workshop. 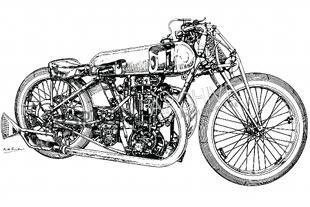 Burdened by tuning work
But as time rolled on it appeared that Lacey, at first burdened by tuning work, and later hampered by his advancing years, would be unable to undertake the project. Reluctantly, Gerry collected the model and took it back to Somerset, there to place the restoration in the hands of Mark Upham, of MB Motor Cycles, Wellington — who, for over two years, had been trying to persuade Gerry to let him do the job, anyway!

There were problems galore along the way, for it was only Lacey's engine which had pusbrod tubes and a rocker box (on production JAP engines of the time, the pushrods and rockers were in the open air). A rocker box had to be cast and machined, as also had the timing case and cover, because the ML magneto is carried further forward than on the standard engine.

Only part of the damper mechanism remained, but Gerry knew that Brampton's had taken out patents on the system, and the original patent drawings were discovered after a four-day search at the Patents Office.New cams were made, back-tracking from the known 1928 performance of the machine to obtain a suitable profile. The gearbox was missing, but Dr. Joe Bayley came to the res­cue with the offer of a genuine Brooklands Sturmey-Archer casing.

Gearbox internals are standard, but that is immaterial. At Brooklands, gears were needed only as the bike worked up to speed, and once top was reached no more gear-changing was needed until the race was over. Similarly, braking is rudimentary in the extreme; none at the front, and a pedal welded direct to the cam arm at the rear. Brooklands folk, after all, were concerned only in making a bike go, and since traffic was all one-way, who needed anchors?

There is one thing, though. In Lacey's day the pad on the brake cam arm was just a small disc, but there is now a flat-strip extension welded to the disc. That, it seems, was done in Ferriihough' s time — because most of the types who hired the model for a session had far less sensitive feet than Bill Lacey, and they needed something more substantial to jab at.

Every bit of the engine internals has been X-rayed for safety reasons. As Gerry Belton points out, it would have been simpler just to put the machine together as a show object: "But I wanted to build, something that was going to be more than just a museum piece. The magic thing is that after half a century I was able to take it back to the banking where it had made the reputation of its builder."

Indeed, at the Brooklands gathering Gerry took to the saddle and worked the old Grin­dlay up to a satisfying 85mph. ("Others in the paddock jeered that I was too scared to go any faster", says he. "Dead `right! It was the first time it had fired, for about 45 years!"). By the time this appears in print he will have demonstrated it also at the Brands Hatch Festival of 1000 Bikes.

Our pictures were taken during a recording session at the BBC's Bristol television studio for the Points West programme.

Oh, and if you are wondering why ‘Nickel-plate’ Lacey took so much trouble to come to the line with his mount in con­cours condition, there is a very practical answer. When a machine is spotlessly clean, it is so much easier to spot a frame crack, crankcase oil leak, or weeping tank seam!