Hardly had the smoke lifted from the battlefields of France after WWI than the famous British aircraft company Sopwith revealed plans, and a proto­type, of a radical new motorcycle designed by Granville Bradshaw of the All British (Engine) Co Ltd — ABC.

ABC had made a name immediately pre­war with a limited number of expensive hand built motorcycles with fore-and-aft flat twin engines of 500cc. During the conflict, ABC had supplied 54 x 54mm 250cc flat twin auxiliary engines for use by the armed forces to drive generators, trench pumps and compressors.

The Sopwith ABC used a version of this flat twin with the bore enlarged to 68.5mm to give 398cc. "Just as good as 500cc before the war," explained Bradshaw. 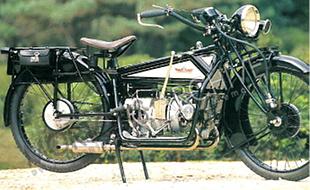 An ever present problem with the flat twin was its length, and it was Bradshaw's stroke of genius to install the engine transversely rather than longitudinally. This permitted a clutch and four-speed gearbox to be mounted in unit. To allow for rear suspension — by anchored leaf springs and pivoted fork — chain final drive eliminated the use of expensive universal joints called for by shaft drive.

Bradshaw's frame design lived up to the novel engine position. Very stiff and yet remarkably light, its widely spaced lower tubes acted as built in protection for the cylinder heads in the event of a spill.

Internal expanding
Both wheels were fitted with internal expanding brakes of generous size (6in front, 7in rear) with remarkable effectiveness. Everything about the ABC bristled with novel­ty. In overall concept, this was a motorcycle many years ahead of its time. 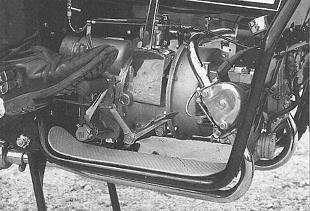 Unfortunately, the combined temperaments and idiosyncrasies of designer Bradshaw and promoter Tommy Sopwith were such that the ABC's premature launch and lackadaisical development for production turned into something more like farce than engineering. After many, many thousands of pounds had been wasted, the company went into volun­tary liquidation at almost the exact time, late in 1920, as deliveries of ABC twins began.

Curiously, the design fared rather better in France, where it was made under licence by aero engine makers Gnome et Rhone of Paris. A connection between Gnome et Rhone and airframe makers Sopwith was only natural.

The Seguin brothers invented neither the radial aeroplane engine nor the rotary radial, but their Gnome et Rhone company pio­neered both. With the Monosoupape (single valve) rotary of 1912, they had an engine well suited to the needs of the coming war.

The rotary radial literally spun about a crankshaft fixed to the airframe at up to 1200rpm, and it can be appreciated that any out-of-balance force would be destructive. So as to match the weight of the cylinders exact­ly, each one was machined from solid steel.

Cool running
For reasons best known to himself Granville Bradshaw seized upon "that wonderful Rhone cylinder." He seems to have attributed the engine's cool running to its steel cylinders, ignoring the fact that they were rotating at 150rpm even when the aircraft was stationary on the ground. 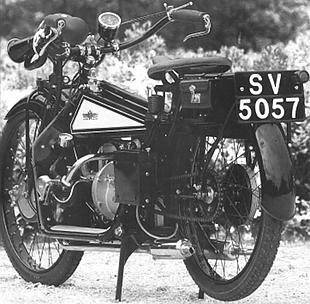 Steel was only used to reduce weight ­iron cylinders as light as that would have been hopelessly fragile — and is far from ideal for this purpose. But Bradshaw had used such cylinders when, in 1912, he constructed a spe­cial engine for Les Bailey of Douglas which Bailey used to break records at Brooklands. Similar steel cylinders were used on the early fore-and-aft flat twin ABC motorcycles, and on the WWI auxiliary engines. From the fervour with which he advocated the use of machined steel cylinders, one might almost believe that Bradshaw had negotiated the English rights to them from Gnome et Rhone.

The French factory's manager, expatriate Englishman Graham Fenton, collected one of Sopwith's hand made ABC prototypes as early as June 1919. And his team of development engineers seem to have done a far more effec­tive job than Sopwith's.

Filtered pressure
They improved and enclosed the valve gear, completely redesigned the crankshaft, provid­ed filtered pressure lubrication to the big-end bearings, altered the kickstarter and effected many other simple but important improvements. The Gnome-Rhone twin was visually distinguished from the ABC by cream petrol tank panels — as used on Sopwith's proto­types — and a Tin rather than 6in front brake. Later models were a full 500cc, but even so, the Gnome-Rhone must be counted as a com­parative failure, lasting only a couple of sea­sons longer than Sopwith's original.

However, unlike Sopwith, the Gnome et Rhone company remained in good shape and were to make motorcycles for the next 40 years. They seem to have retained a soft spot for the flat twin engine. 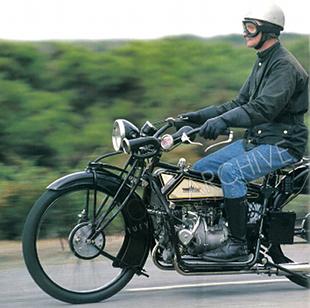 The early history of Ken Blake's 1922 Gnome-Rhone is sketchy indeed. It was imported from France for sale at the Beaulieu Autojumble a dozen years ago in a dismantled and incomplete state. The 400 twin then changed hands several times without restora­tion even beginning. That commenced three years ago when Ken acquired the twin, and decided that it was now or never.

Ken is no stranger to difficult restorations, although having said that, the Gnome-Rhone was more of an extensive cosmetic operation than anything else. The only major items that had to be replaced were the pistons and the special leaf springs for the rear suspension.

The final drive bevel gear was damaged, and Ken built up the missing teeth with gas welding, and ground and filed them as closely as he could to the correct profile. The gear was then heated red hot and plunged in oil to temper it and has since given stalwart service.

The leaf springs had to be specially made ­there are limits to what can be done in a pri­vate workshop — and the pistons were replaced with Hillman Imp items. Ken soon found that he couldn't use a boring bar on the steel cylinders, which had to be very carefully skimmed out in a lathe. Two years of work resulted in a motorcycle that is well up to the standards of those with which it largely keeps company — in Sammy Miller's Museum in Hampshire (01425 616446).

Sopwith ABC
I've now had the great good fortune to ride both a Sopwith ABC and its close relative from France, and I must say that both were impressive. Ken's machine has the edge over Colin Mitchell's ABC, both in acceleration and top speed, perhaps because of a higher than standard compression ratio due to the Hillman Imp pistons. Whatever the cause, reliability hasn't suffered, and the 398cc twin has carried Ken on events in England, Belgium, Germany and Holland. His Gnome-Rhone will certainly do 60mph, and cruise at 50mph. He has added James silencers as plain pipes were too noisy. 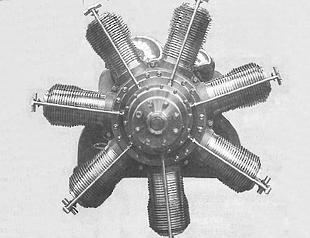 The two-plate engine speed clutch takes up drive firmly and smoothly and the gearchange, with its car type gate is a delight to use. The gap between third and top gear is unnaturally wide, a common failing on vintage models.

The twin's steering and handling leave nothing to be desired at 60mph and the way that the slim leaf springs glue the wheels to the road has to be experienced to be believed. Comfort? Well, some vintage saddles are bet­ter than others. And I rather preferred the semi-TT handlebar bend of Colin Mitchell's ABC to the sit-up-and-beg type on the Gnome-Rhone. The fact that on Ken's bike I could easily reach the front brake lever was no bonus, as despite its 7in diameter, that component was the bike's biggest disappointment. Surely just a matter of unsuitable lining material? There was nothing wrong with the rear stop­per. The only other sore point was the lack of kickstarting. Gnome et Rhone used a different layout to ABC, but neither seems to have got it right. Yes, with such a light agile motorcycle, paddling away with the valve lifter raised isn't too much of a strain, but I think that might become tedious in time.

Pause, though, in the full flood of criticism and consider two important facts. Both of these motorcycles were designed and built over 70 years ago. And when we compare either the ABC or its French cousin with what other motorcycle manufacturers were producing in the early Twenties all we can do is applaud such enterprise.