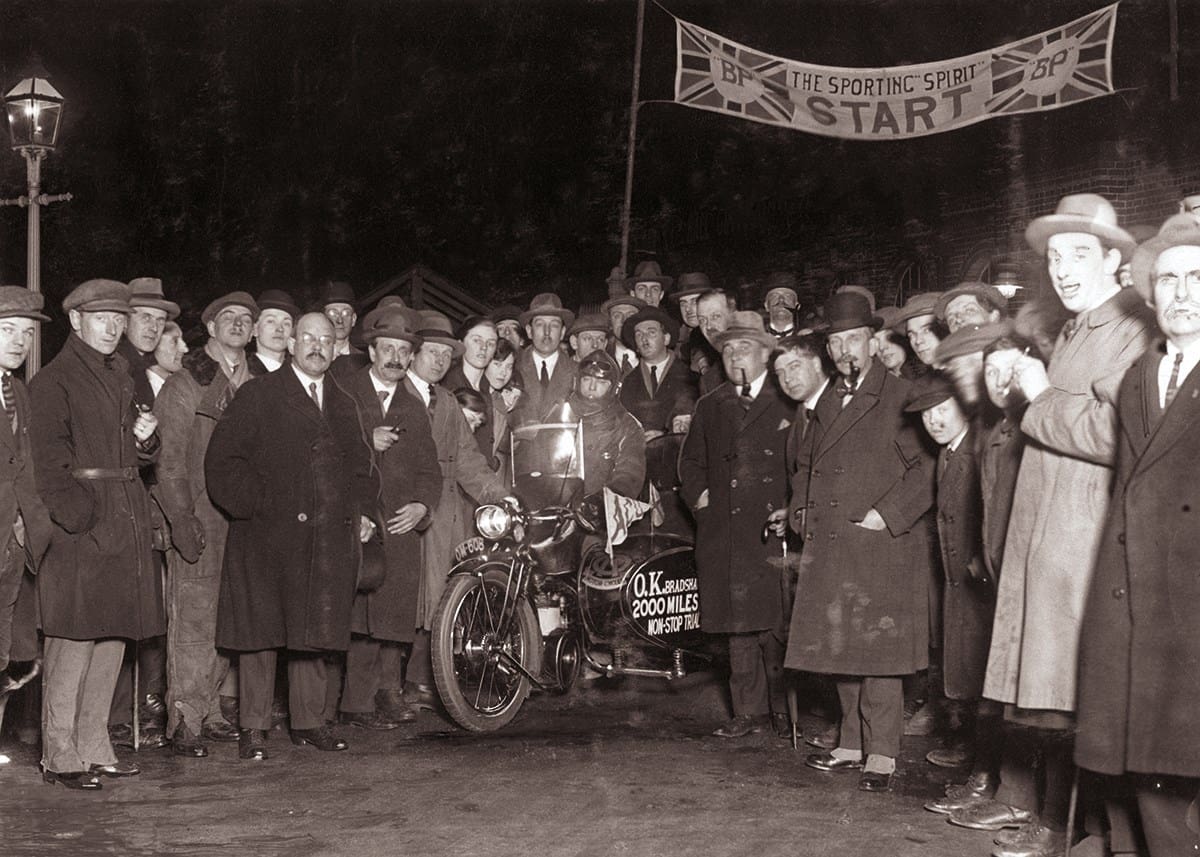 Covering upwards of 2000 miles, on a 350cc sidecar outfit carrying two full-grown men, in February, sounds like purgatory, though it was in the name of publicity…

On Monday, February 9, 1925, at approaching 9pm, a crowd gathers to watch the departure of a 350cc OK-Bradshaw, fitted with an OK Number 2 touring sidecar, on a 2000-mile nonstop trial. Occupying the appendage was an ACU observer, while there was a team of eight riders scheduled behind the Easting screen fitted to the motorcycle – the ACU-men (there were three of them, including Arthur Bourne, the others S T Huggett and T Pope) was afforded the same protection.

Most of the riders were OK agents in various parts of the country – they were J Edmondson (Keswick), R Hickman (Luton), G Sankey (Service Co., London), R Lawson (Bristol), Frank Hallam (Birmingham), plus OK head tester W J Johnson, A Johnson (another OK tester) and Jack Emerson, from Bradshaw engines; the experienced Emerson, whose competition career stretched back before the First World War, had finished sixth on a Bradshaw-engined DOT in the 1924 Junior TT.

The Motor Cycle of February 12, 1925, explained the motivation for the attempt: “In addition to proving that a 350cc sidecar outfit is capable of traversing the length and breadth of the country, the manufacturers wish to increase the confidence of the public in overhead valve gear – at least as far as Bradshaw engines are concerned – as they have faith in this type of unit and consider that the test will help to overcome much existing prejudice.”

The mentioned overhead valve engine was the Granville Bradshaw designed ‘oil boiler’, featuring an outside flywheel as well as the then relatively avant-garde valve-gear arrangement, plus oil cooling. But did it all work? That was the question the public wanted answering, hence the high-profile stunt. Starting from that 9pm start time, the outfit was to cover 2048 miles in 111 hours, 23 minutes, in a ‘star shaped route radiating from Birmingham.’ Although the aim of running nonstop was missed, total time the engine wasn’t running was apparently ‘about half an hour’ of which ‘…nine minutes was lost to carelessness, the tanks being allowed to run dry with a consequent delay in refuelling.’ The attempt finished at 12.30pm, on February 16.

The ‘involuntary stops’ in total numbered five, with several (four) being down to magneto issues, due to the inclement conditions occasionally encountered – not only was there heavy rain, but it also snowed too. The fifth was the aforementioned petrol foul-up. There were eight other stops, when ‘…the engine came to rest when idling, but was restarted in a matter of seconds.’ The average speed (including all the driver changes, the adjustments, the refuelling etc) was 18.39mph, with fuel and oil consumptions averaging 69.5mpg and 2128mpg respectively.

Motor Cycling (February 25, 1925) concluded its report thus: “At the conclusion of the test the combination was examined externally and the engine was partly dismantled for inspection. With the exception of the following, the whole outfit was found to be in excellent order: – Adjustment required to front brake, rear wheel bearings, secondary driving chain and the rear gear control. One spoke in the rear wheel was fractured. The engine was in very good condition, there was no appreciable wear in the bearings, the valves were not pitted and there was but a slight carbon deposit. Both inlet and exhaust tappets required adjustment. The petrol and oil used were BP and Castrol respectively.”

Despite the useful publicity, the firm of OK – a partnership between Ernie Humphries and Charles Dawes based in Hall Green, Birmingham, which built its first motorcycle in 1899 – was not long for the market, disbanded in 1926. Humphries promptly formed OK Supreme, while Dawes switched purely to bicycle manufacture; the works was passed onto Veloce/Velocette, although Dawes carried on making cycles in part of it, Dawes still being a bicycle manufacturer today, although it passed out of family ownership in the 1970s. Humphries was to make OK Supremes until 1940, the company’s highlight a 1928 Lightweight TT win.