Now, with it wet and miserable, it seems less fun to be out on motorcycles. It’s different when it’s a necessity but, well, going for a ride when there’s no real need apart from the pleasure of doing so, seems less appealing when the air is damp and the mist is cloying. 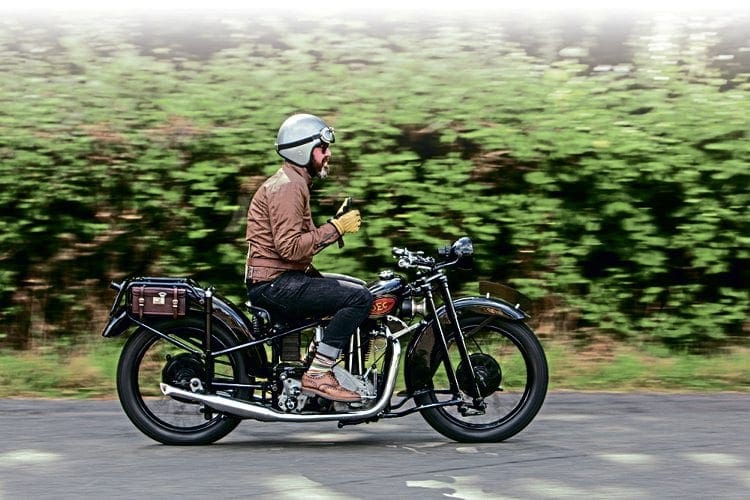 Still, I managed to get out for one club run, though the weather was such that being able to see was quite an issue – while being seen was a bit of a worry too. Luckily, I had reliable lights, but the thing which surprised me most was that when we got to the event’s start – it was the day the clocks changed – having ridden through fog and rain, the place was packed with people (riding classic machinery) looking at the sky and optimistically opining: ‘Think it’ll break soon’ and other such commentary, in between telling tales about memorable rides home/to work in the dark, fog or indeed dark and fog. The weather broke – well, sort of – and we had a good day’s riding, with no incident. But it wouldn’t have been a day to be out with no lights, mainly as it was dark by about 3.30pm.

So, it’s probably a better time for tyre kicking and motorcycling chat. A few weeks ago I was invited over to a friend’s house, as he’d just acquired a new toy, a sporting vintage machine. I arrived there and it was positioned in the driveway. Another friend, Helena, was visiting the owner of the new arrival. “We’ll just have a quick look at the bike,” we chorused. Twenty minutes later, we were back indoors – but then another (motorbike) pal turned up, so back outside, then back in.

“Think I’ll go and fetch Tom,” said the newcomer as we settled down for a cuppa. Off he trotted to fetch the gent from down the road and out we all went for more ooh-ing, aaah-ing and cooing. Helena’s comment when we all trooped back in (while Tom had come clutching some pictures of a vintage Douglas he’d owned in the early 1960s) made me laugh; “Now I know how a bloke feels in a house full of women when a new baby is brought round…” Maybe that’s a refection on us and our enthusiasm but it did resonate (as well as making me laugh!) as we four men (of four different generations, incidentally) bonded over an inanimate object…

On the subject of inanimate objects with sentimental attachment – we’ve a Vincent Comet and a Triumph Thunderbird in this issue, both machines I’ve owned and had great times with, and have enjoyed reading about again, while I also fulfilled an ambition to ride an OEC…