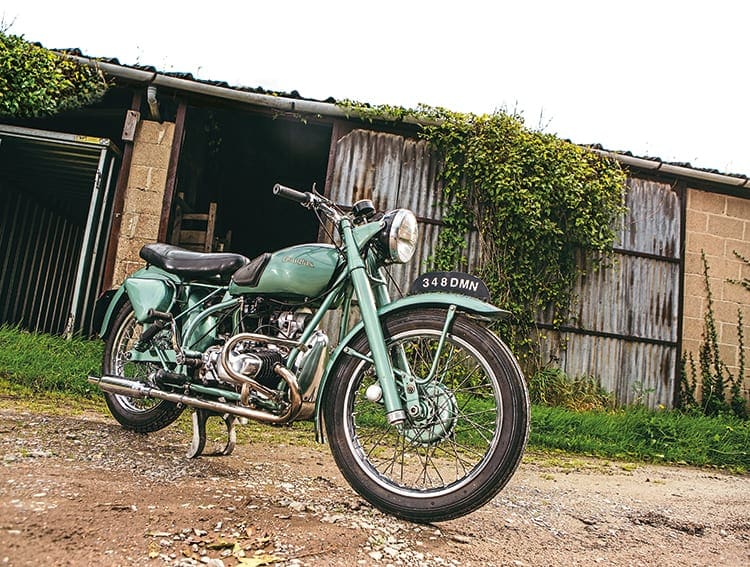 While the herds went one way, with formulaic designs, Douglas went in another direction completely, with a quirky flat-twin. It worked well, too.

The famous motorcycle scribe, the late Jeff Clew, once said: “There’s something special about just sitting on a mark Douglas. I swear that if I was led into a completely dark room full of motorcycles and asked to locate which one was a Douglas, its riding position and feel would immediately give it away.”

I’m proud to say it was thanks to the encouragement I received from Jeff nearly 20 years ago I became a full-time motorcycle journalist and I’m sure if he was still alive today, he would be delighted to read about this month’s test bike. It’s a Mark V Douglas now owned by west countryman Ron Axon, a great enthusiast who incidentally lives only a few miles from Jeff’s former home on the Somerset-Dorset border.

The ‘Duggie’ joined Ron’s eclectic collection of British and Japanese bikes in 2000, all of which – as regular readers will know – are largely unrestored  examples that have spent most of their lives in local villages along the Jurassic Coast. However, this 350cc twin – wearing the number plate of 348 DMN – originally came from the island in the middle of the Irish sea and although it was complete, both the paintwork and the engine were in a rather ‘tired’ state, so it was treated to a total strip and rebuild by the talented ex garage owner.

Ron, who has been a regular in the saddle since 1946, is a believer that bikes are for riding, and with the polychromatic green paintwork gleaming in the summer sun, the little twin probably looks better than the day it rolled out of the Kingswood, Bristol, factory doors in April 1953. Before we fire the engine into action, it’s time to look back at some of Douglas’ history and hear from Ron about his restoration.

The Douglas Manufacturing Company was founded in 1882 as a family business but another 25 years would pass until the first motorcycle carrying its name on the petrol tank appeared. Douglas had first ventured into motorcycle manufacturing in 1905 when one of its customers – Joseph Barter from Light Motors Ltd – designed the Fee (Fairy) system for mounting an engine into a bicycle, with the Kingswood company making the castings for the machines. Sales of the 2½hp Fee were disappointing in the home market and period reports would lead us to believe that of the weekly output of 10 machines, most of these were exported to Japan and New Zealand.

In 1907 Light Motors Ltd went into voluntary liquidation but it is said that through his acquaintanceship with Joseph Barter, William Douglas persuaded his father to come to the rescue and engage Barter as works manager in order to continue the manufacture of motorcycles at the Bristol works. William Douglas had plenty of optimism as to the potential of the Fee and, despite some initial reticence from his father, a new department for motorcycle manufacture was added to the works and the same year – with an increase to 340cc – the first ‘Duggie’ was born.

The well-constructed twins soon established a reputation for excellence both in competition and reliability and during the First World War, Douglas produced some 70,000 machines for the military, all of these with the engines mounted longitudinally in the frame. The neat and reliable engines were soon under close scrutiny by other manufacturers and if period reports are to be believed it was one of these machines that BMW’s engineer Max Fritz borrowed from his works foreman Martin Stolle, and with engine reversed he created the now legendary BMW horizontally opposed twin. This horizontal engine mounted transversely in the frame was a format Douglas was to follow from the mid-1930s through to the end of motorcycle production in 1957. The Mark V was introduced in 1949 and by modern standards it’s certainly a tiny bike as it barely comes up to your knees when you stand alongside it, but it bristles with innovation. Among these are a raft of patents including the oil damped Radiadraulic leading link forks – which give 5.5 inches of travel, torsion bar suspension at the rear, a butterfly valve carburettor and a four speed gearbox with final drive by chain to the back wheel. When the Douglas sprung frame was launched it set a new standard of comfort over the period opposition and the handling was described by road testers as “excellent by any standards”.

With a top speed of just short of 60mph, the 350cc twin was not the fastest bike of its day but the 180° cylinder disposition offered a power curve free from vibration and to quote the Douglas brochure “…the Mark V represents one of the most highly developed models in the industry and has no rival for the motorcyclist who needs efficiency, comfort, reliability and perfect road holding. A twin is best and Douglas is the best twin.”

Courtesy of an advert in the local evening paper, the Mark V came Ron’s way in the summer of 2000. He takes up the story…

Read more in the November issue of The Classic MotorCycle – on sale now!