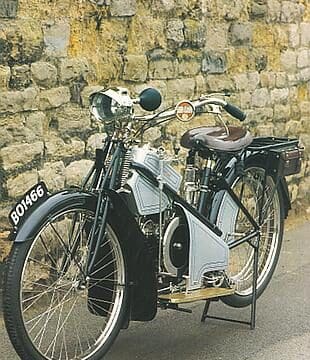 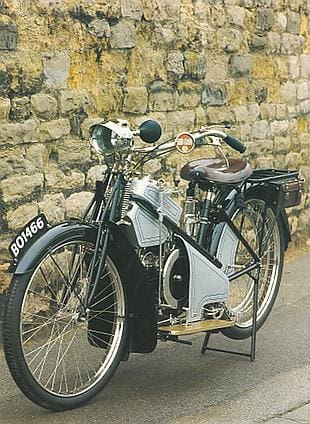 History books do not, on the whole, serve women well. With a few exceptions women's achievements, though they may be lauded at the time, are soon forgotten. This is never truer than after a war. During both world wars women were urged and encouraged to take on heavy manufacturing work, work on which the war effort relied, and many accepted the challenge, finding enjoyment and satisfaction in trades which previously had specifically barred them. When the men came home, women were eased out again and until fairly recently this aspect of their contribution to victory remained unmentioned.

The foregoing may not seem relevant to motorcycles, but I assure you it is. What we have here, you see, is a Lady's motorcycle. No, not a machine owned by a lady, but one designed for women. A rarity? Well, it may be so now, but in the early days of the century certainly up to 1914 almost every manufac­turer of note made a ladies model. There must have been many made, and many bought (in relative terms) — and now there are not very many at all. Now re-read the first paragraph and see if you can think of a reason why these delightful machines should not have been treasured and preserved.

Early volumes of Motor Cycling featured a regular column for the lady motorcyclist, conducted by Muriel Hind, who in her time was a well-known and successful trials com­petitor. Naturally, she reported on the many women then taking up the new sport, and on the new models as they were brought out by manufacturers. The Douglas name crops up often, both as a popular mount and as a test machine.

The open frame model was first pictured in the issue of Motor Cycling dated Nov 17th 1910. A week later it was described in the report of the Olympia Show; fitted with the horizontally opposed twin cylinder 2¾ hp motor that was standard to the Douglas range, the new machine had a deluxe specification—two speeds and a free engine (ie clutch). Footboards were thought to be long and com­fortable, and though the open loop would obviously allow a lady to use the machine without having to alter her style of dress, the motorcycle was "intended for either ladies' or gentlemen's use".

The first test of the machine came the following year, when Muriel Hind, who found herself near Bristol in the course of her wanderings, popped into the Douglas Bros. factory and popped out again with the lady's motor-bicycle. Reporting in January 17th, she found the most impressive aspect of it was, "the entire absence of vibration, even when the engine was raced on the stand. This indicates a perfect balance unattainable in single-cylinder engines".

The clutch and gearchange were simple to comprehend and easy to use; the mudguards and shielding protected the clothing effec­tively; the hill climbing ability of the machine was exceptionally good; and the brakes were powerful and conveniently placed. Perhaps more tellingly, "One of the many points which pleased me was the remarkable accessibility to the various essential parts. The carburetter (Douglas Brothers' own patent) can be quickly taken apart without even the use of a tool. A friend of mine, an engineer, recently looked over the Douglas works, and was loud in his praise of the organisation pre­vailing in them. Douglas has even its own foundry for casting cylinders etc. In all probability we shall see a good many new lady riders on Douglas machines this season".

Later in 1911, Muriel Hind featured two Douglas riders. The first, Mrs. Gibb, found her model very easy to handle, even in traffic, and an interesting sidelight was thrown on the pursuit; "for years this rider suffered from ‘nerves’, but since taking up motorcycling she has quite forgotten them. Some people may find this hard to believe, but it is quite true. Surely, if a motor-bicycle is going to act as such a splendid tonic, it will be an added inducement to take up the pastime".

Miss May Senior
The second rider was Miss May Senior, who "could hardly say what induced me to take up motorcycling. A year ago I never even dreamed of it. My brother had taken up the sport, and laughed at my getting a new push-bike, saying I should go in for a motor­cycle. Then I began to look for pictures of lady riders in Motor Cycling, and gradually the idea got fixed in my head…"

Miss Senior took up the new sport with a will. "Her longest ride was with the Ayr Club, a reliability trial to Penrith and back, a distance of 251 miles, which she completed within schedule time, thereby winning a gold medal. It speaks well, both for the skill of the lady and the running of the machine that dur­ing the whole of this trial there was no trouble of any kind". 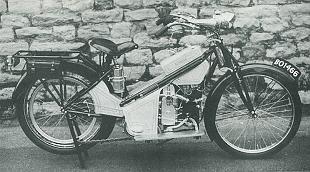 A better-known lady rider was interviewed (not that Muriel Hind would have used the word) in March 1912 — Miss Rosa Hammett, who entered and did well in many events, including the ACU Six Days Trial (an event, incidentally, which Miss Hind contested more than once). Of her machine, Rosa Hammett said; "The Douglas has proved more suitable than anything I have pre­viously owned. I find competition riding most enjoyable, and consider that runs up to 12 hours are quite within a woman's powers. Personally I never feel the least bit the worse for them."

However, despite these accolades of the time, and the apparent popularity of the model, there are, as I have said, not a great many left, and I have outlined my reasons for thinking why this should be. All the more credit, then, to John Jennison of Pickering for making such a superb job of his 1914 Douglas Model S, which is the machine you see in the photographs.

John Jennison has specialised in collecting Douglases ever since his very first mount, a '48 Duggie. Well, perhaps not ever since, for there was a bit of a lapse after his national service during which he got around on four wheels but appropriately enough, the link which reconnected him to motorcycling was Freddie Dixon, the "Wild Man" and well known Douglas racer. Dixon, a native of Stockton, had a garage in Middlesbrough with, of course, a Douglas agency. From that garage, in 1926, the carpenter cum under­taker of the village of Harome, Yorkshire, bought a bike; and after many years and much use, John Jennison's father-in-law bought it at auction for something like £8. It was in good running order, and revived John's memories of the fun he had had in his youth. In time the '26 Douglas passed on to him, and he has it now, the supplier's brass plate still attached. It reads; ‘Freddie Dixon, Park Garage, Linthorp Road, Middles­brough’. It was enough to set him on the collecting trail.

Good number
Since then he has acquired a good number of machines, finding many of them as a result of his work. Being a builder he gets around the countryside a bit, and has often come across old motorcycles in buildings, aban­doned or just forgotten. Some of these he has kept and restored, others he has swapped for Duggies or Douglas memorabilia, for apart from the bikes themselves, his study is lined with books, magazines, catalogues, pamphlets and so on, the fruits of years of searching autojumbles.

One thing eluded him for a long time. A Douglas Ladies. He looked for many years, but in the end he bought one at the auction of machines owned by Colin Lomax, in Heanor, Derbys, in 1981. His purchase was complete and basically sound, but it was rough. Working systematically, as his note­books show he does with all of his res­torations, he took the Douglas apart and made it almost as good as new. 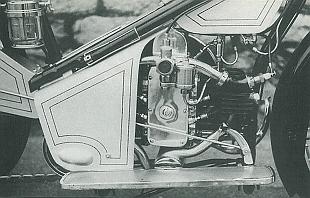 That ‘almost’ is important, for John does not like his bikes to look featureless. A motorcycle made in 1914 should, in his opinion, bear some signs that it has had a long life ­that it has, in fact, been used. Thus, if you look closely you will see that the dummy rim, though very well plated, is pitted. The saddle, though it has a cared-for sheen, is visibly bat­tered and worn — it looks as though people have sat on it! Likewise, the toolboxes bear the scars of a long life. The leather from which they were made undoubtedly did have a hard life, though they are not the original fittings, for it came from John's old school satchel, and was fashioned into shape by Dave Evans of Kayton. The metal surrounds are new, too, but made to exactly the right shape and trim (with wire-rolled edges) by a craftsman who served his time at Aston Martin. The same person made the replace­ment side panels for the mudguards, but sadly he must stay anonymous: his skills are for friends only.

Where new parts have had to be made, or old parts renovated, all of John's knowledge of the marque has been brought to bear, to ensure authenticity. He has heard people criticising the extent of nickel plating, but maintains that this deluxe model always had more nickel than most others, and that his is no more, and no less, shiny than when it left the factory. When acquired, the bike was painted black all over, but careful work with silicon carbide paper revealed the original silver, and the line and dimensions of the striping. The tank and panels were stove enamelled by Nutter Bros. of Beverley (and an excellent job they have made of it, too), while the hand lining was done by Dower and Laing, a firm of signwriters in Pickering. Whilst we are crediting people, it is only fair to mention Allenchrome Electroplating of Pocklington, Yorks, and Colin Gifford, who helped John with the engine.

As a matter of interest, the engine showed little sign of wear, and could be rebuilt without the need for any kind of major surgery. The spark plugs fitted when the bike was bought are fitted still, and they work well enough, although there is no maker's name on them.

John Jennison's machines are not restored and then kept wrapped up in cotton wool. He has them to use them, and every year one or two are taxed and ridden in VMCC or London Douglas Club events, often with his son Charles riding pillion. The Ladies model, though the jewel of his collection, is no exception, and John finds it very comfortable ­and, again confirming those early test results, extremely easy to start. John's sympathetic restoration has won many awards including Best Veteran at the Belle Vue Show, and it would surely be a sight to gladden the hearts of Mrs. Gibb, Miss Senior, Miss Hammett and Miss Hind.